In ‘On The Basis Of Sex,’ The Ginsburgs Take The Prude Out Of Jurisprudence

And some, who have actually seen the film, will say, WOWEE-ZOWEE.

A lot of “On the Basis of Sex,” which hits theaters on December 25, features Felicity Jones as Ruth Bader Ginsburg striding around, chin high, trying to practice the law in spite of mammoth impediments. She marches in and out of offices, struggles to balance her home life and her career, and in exactly one scene, actually speaks in a courtroom.

But the movie’s most exciting moment is when Armie Hammer, as Marty Ginsburg, stares deep into his wife’s eyes while telling her she’s the smartest person on the Harvard campus. Then he slowly undresses her and picks her up, hoisting her tiny body so her legs wrap around his abs, and gasps into her ear, “Mmmmmm. Mrs. Ginsburg.”

Whoa. Call me by my legal name.

Armie Hammer, who was born on Olympus after a swan copulated with a sea nymph, is a hulking meat patty of a man. Jones is a haute American Girl Doll. Together, they take the “prude” out of jurisprudence.

And according to Marty Ginsburg’s nephew Daniel Stiepleman, who wrote the film, this is historically accurate. “Have you seen young pictures of Marty? He’s really handsome!” Stiepleman told me. “The two of them were beautiful! They were both smokin’ hot.

RT if Ruth and Marty Ginsburg are your #RelationshipGoals. #RBGMovie pic.twitter.com/xT4yFuUxUt

Stiepleman said that when asked about the movie’s sex scene, Bader Ginsburg said, “Marty would have loved it.”

Ladies and gentlemen of the jury, the facts are these: Ruth Bader Ginsburg was a superlative lawyer and is a superlative judge. She has earned her position as a feminist icon. She has been canonized as the Notorious RBG and has inspired a pop industry that exists to revere her.

And on top of that, she is one half of a great American love story.

Ruth Bader and Marty Ginsburg fell in love at Cornell. At the time, Bader Ginsburg said “The most important degree for you to get was Mrs.” As Jane Sherron De Hart writes in her biography “Ruth Bader Ginsburg,” the future Supreme Court justice sometimes took her books to empty bathrooms on the Cornell campus because “it didn’t do” to be seen studying.

When Bader Ginsburg met her future husband as a first-year student, he had a girlfriend at Smith and she had a boyfriend at Columbia. But Ginsburg found Bader Ginsburg so absorbing that he found out what classes she was taking and signed up to take them too. He was a golf enthusiast and his fraternity’s bartender. She was Phi Beta Kappa. He thought her smile had “stunning radiance” and loved her “intellectual luminosity,” but had some less positive feedback on her fashion choices. They became best friends. Then their relationship turned romantic. 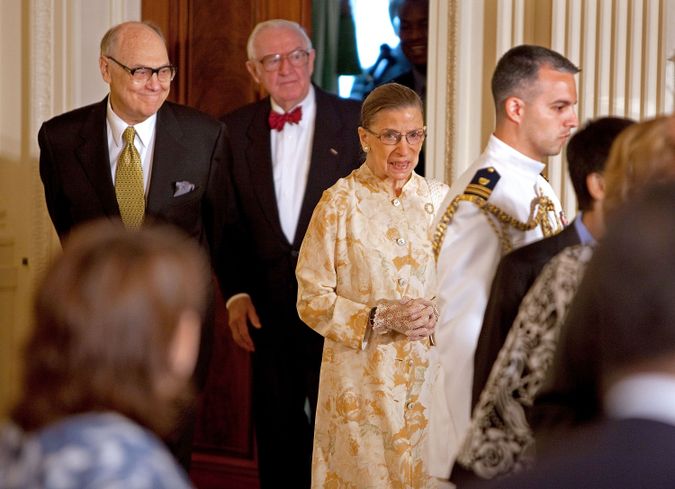 Marty Ginsburg, in the yellow tie, always looked at his wife like this. Image by Getty Images

“He was just so damn smart,” Bader Ginsburg said. They agreed to go into the same line of work, so they could always have an intellectual partnership. She chose law. He agreed.

“He was the only young man I dated who cared that I had a brain,” she said. Their marriage lasted 56 years, until Ginsburg died in 2010.

When “On the Basis of Sex” begins in 1955, the couple has been married for two years and has a baby daughter. By day, they study case law. By night, they study… you get where I’m going with this. In their darkened bedroom, Hammer stands dwarfing Jones, teasing her with banter. “Come down and say that to my face,” she taunts him. He seizes a handful of her crinoline.

The goal, Stiepleman says, was to humanize Ruth Bader Ginsburg, a person who is lionized and demonized but rarely allowed to be a person. “And what could be more like a person than making love to the person you love?” he asks.

It’s not just deeply romantic lawyer sex — the movie satisfies a number of domestic-egalitarianism kinks. In most of Hammer’s appearances on screen, he is wearing an apron and making a frittata. If he’s not doing that, he’s bouncing a baby on his hip while reading tax law. Otherwise, he’s gazing into Bader Ginsburg’s eyes, giving her a pep-talk about her brilliance. This, too is not a Hollywood fantasy. “He always wore a French apron,” Stiepleman recalled of his uncle.

Ginsburg joyfully did all the cooking for the family, even as he became one of the most successful tax lawyers in the country. Martha-Ann Alito, another Supreme Court spouse said that Ginsburg saw cooking as the most “satisfying [sic] expression of love.” After his death, Alito helped create a cookbook of Ginsburg’s recipes, including one for the wild boar her husband, Justice Antonin Scalia, once brought back from a hunting trip. Ginsburg prepared it for New Year’s dinner.

be the marty ginsburg to my ruth bader ? pic.twitter.com/BtaJB2Fy2m

The movie’s storyline ends in 1972, but the subsequent decades the Ginsburgs spent together were as hot and heavy as the sight of Armie Hammer making a frittata. When Ginsburg heard that his wife was on President Clinton’s short list of nominees to the Supreme Court, he launched an aggressive campaign to get her there. He met with the heads of feminist organizations, Bader Ginsburg’s former professors and major female law professors, and urged important players to send the White House letters in her support. He was so successful that the White House told him to stop. It is the only time, De Hart writes, that a campaign for a Supreme Court seat has been led by a candidate’s husband. And when the vetting team came to the Ginsburgs’ house, Marty served them a “Tuscan lunch,” before showing them the most organized and meticulous tax records they had ever seen.

In the professional biography Ginsburg used for his tax firm, he celebrated his relationship to women, boasting, “In 1993, the National Women’s Political Caucus gave Professor Ginsburg its ‘Good Guy’ award; history reveals no prior instance of a tax lawyer held to be a ‘Good Guy,’ or even a ‘Decent Sort.’”

But in the end, Ginsburg deferred to his Supreme Court justice wife. “Professor Ginsburg’s spouse was a lawyer,” he wrote, “before she found better work.”

In ‘On The Basis Of Sex,’ The Ginsburgs Take The Prude Out Of Jurisprudence