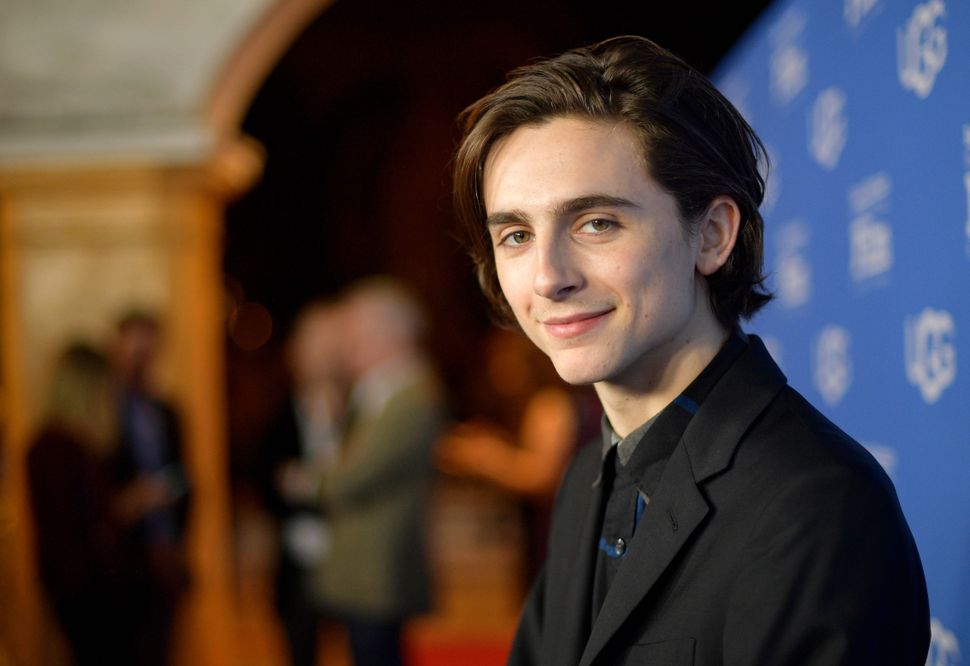 Timothée Chalamet is officially the youngest actor in 80 years to be nominated for Best Actor at the Academy Awards for his performance in Call Me By Your Name (2017). And we’re shepping a lot of nachas.

(He also makes an appearance in another film, also up for Best Picture this year, Lady Bird.)

Like any good Jewish boy, Chalamet went to the elite of performing arts schools – Fiorello H. LaGuardia High School, class of 2013. There, he dabbled in acting in school plays and even a little bit of rap, becoming the alter-ego Timmy T. for a statistics project, which he was teased about recently by Ellen DeGeneres. After starring in the Matthew McConaughey film Interstellar (2014), a string of independent films, assorted off-Broadway plays, and a year at Columbia University, Chalamet decided to go to NYU’s Gallatin School of Individual Study in order to continue pursuing his career.

Chalamet is apparently following his family minhag. His uncle is director Rodman Flender, and his aunt is famed screenwriter Amy Lippman, best known for being the co-creator of the hit 1990’s television series Party of Five. Chalamet himself as a teenager was in a relationship with Lourdes Leon, the daughter of Madonna, a long-time lover of Kabbalah and the Jewish religion (Did Chalamet and Leon call themselves by each other’s names? We will probably never know).

Call Me By Your Name, based on the book by Andre Aciman, depicts a young man (Chalamet) who falls in love with his father’s assistant (played by fellow Jewish actor Armie Hammer) during the summer of 1983 in Northern Italy. The two leads, both Jewish on-and-off-screen, struggle with trying to figure out exactly what they’re feeling, while surrounded by their Jewish traditions. Their common Jewish heritage sparks the initial attraction, with Hammer’s character always wearing a Star of David necklace while Chalamet’s character’s family is Jews “of discretion.” The final scene shows a Hanukkah dinner, with a menorah in the background.

“Art takes place in the head of the audience member,” he told the New York Times. “Anybody’s reaction is fair – as long as they’ve seen the art. And I’ve yet to speak with anyone who saw the film as anything other than a consensual story, full of love.”

For Chalamet, Judaism “wasn’t something I could verbalize or understand in a conscious domain,” he told Film School Rejects. “There’s something inexplicable about it that is a driving force in the film. There’s something tangible in watching it and doing it.”

So what is next for Chalamet after awards season dies down? He’s tapped for the film Beautiful Boy, starring alongside Steve Carell. He also finished principal photography for the Woody Allen film A Rainy Day In New York, where in light of long-standing sexual assault allegations against Allen, he announced that he will be donating his salary to the organizations Time’s Up, RAINN and the LGBT Center of New York.

“We’re only here for so long,” he told W Magazine. Be happy, man. You could get hit by a truck tomorrow.”

Not a bad way to view life, Mr. Chalamet. We’ll be rooting for you as we watch the Oscars this year.

Adrianna Chaviva Freedman is an entertainment writer living in New York City. You could find her work at www.adriannafreedman.wordpress.com and follow her on Twitter at @ac_freedman.