The Kafkaesque story of how Kafka’s “Trial” got cancelled 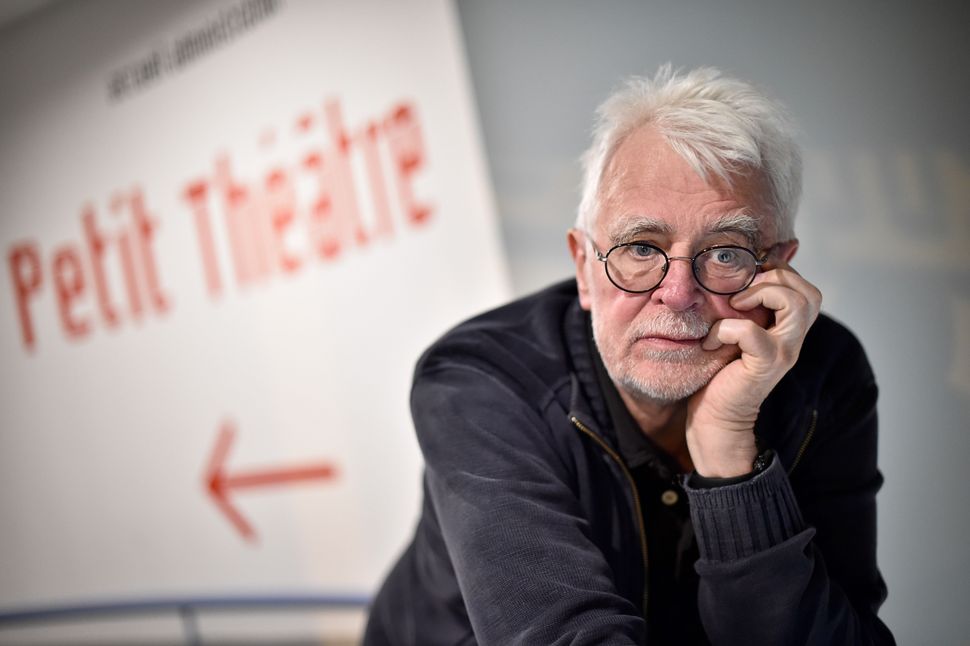 Krystian Lupa, director of ‘The Trial.’ Image by Getty/LOIC VENANCE/Staff

Editor’s Note: This story has been updated to include the Adam Mickiewicz Institute’s response to NYU Skirball’s statement that “The Trial” was cancelled due to its decision to withdraw funds.

A stage adaptation of Franz Kafka’s “The Trial,” which was set to debut in New York at the NYU Skirball Center March 7, has been cancelled. Skirball’s director, Jay Wegman, says the production was scrapped after a Polish cultural institution reneged on a promise for funding and gave no reason as to why. That institution says they never made the offer. These mixed messages and crossed wires are a clear case of life imitating art.

In Kafka’s novel, Josef K. is accused, tried, and executed for a crime that is never specified. According to Wegman and the production’s celebrated director and adapter, Krystian Lupa, their crime appears to be a critique of the Polish government. Like the judge and jury presiding over Josef K.’s trial, the trouble appeared seemingly out of nowhere.

“There was no hint of any problem,” Wegman said of the planned production in a phone interview.

According to Wegman, the Skirball Center had been in talks for about a year with the Adam Mickiewicz Institute (IAM), an arm of the Polish Cultural Ministry with the goal of bringing Polish culture abroad. The institute did not respond to requests for comment by press time.

IAM’s director, Krzysztof Olendzki, had visited the venue and everything seemed set to bring the production over from Poland. In September, there was a change of leadership — Olendzki’s contract wasn’t renewed — and Barbara Schabowska, a journalist who had no prior experience in cultural diplomacy, replaced him. Her deputy visited Wegman in November.

In a January 14 statement, IAM responded to Skirball’s announcement of cancellation the day before. The institute claimed that the first time they heard of the production was in November, when Skirball first announced its 2020 season.

Wegman said he was flown to Krakow as IAM’s guest to the Divine Comedy Festival, a large festival of Polish drama held every December.

“We were supposed to finalize everything there,” Wegman said. “And the director didn’t show up.”

Wegman suspected something had changed, but had yet to see anything in writing. Wegman says he never even spoke to Schabowska directly — only through intermediaries. After no response, Wegman’s contact at IAM drafted a letter, which he says gave no real explanation as to why funds were pulled.

“No mention of censorship or anything,” Wegman said.

According to a translation of UAM’s statement by the Calvert Journal, an English language publication focused on Eastern Europe, the institute “did not withdraw the grant for Lupa, because it never awarded it,” and “at no point did anyone from the Skirball approach IAM with an official ask for financial support.” Wegman told the journal that no contract was ever signed, but that funding was verbally promised.

From its early development in 2016 — a year after the nationalist Law and Justice party took power and began dismissing curators and scuttling artwork — Lupa’s production has proved to be timely in its subject matter, focusing on a brutal and arcane bureaucracy fed by falsehoods.

The adaptation was originally slated for production by the Teatr Polski in Wroclaw, a national theater. Early in the process, Minister of Culture, Piotr Glinski appointed Cezary Morawski as artistic director, and rehearsals came to a standstill. Lupa, believing Morawski’s appointment was political, withdrew the work in protest. He later received funding from non-government sponsored theaters and debuted the five-hour production in November 2017 at the Stary Teatr in Krakow.

“The Trial” went on to run to acclaim in Paris and Athens, backed in part by IAM. But, Wegman says, the institute has recently been cutting off productions that were planned under Schabowska’s predecessor.

“We’re not the only people this is happening to,” Wegman said. “There was a festival in Lithuania and three months before they were supposed to do a Polish production, Barbara [Schabowska], pulled that contract. No one is speaking out in Poland, because they’re afraid of repercussions.”

Wegman hoped he could move the funds earmarked for “The Trial” over to Skirball’s upcoming Wooster Group production — a company that IAM had sponsored in the past — but was unable to. He believes Schabowska, whose husband is a journalist for a Law and Justice-friendly news outlet, might have lost her job if she backed “The Trial,” a work that is a not-so-veiled commentary on the state of contemporary Poland.

Schabowska wouldn’t be the first Polish cultural director to lose her post under the current government — she wouldn’t even be the first at IAM. Glinski terminated one of her predecessors, Paweł Potoroczyn, in 2016, following his censure for not featuring enough artists “inspired by Christian values,”. A labor court later ruled Potoroczyn’s firing unlawful. Olendzki, his successor, was replaced — somewhat unexpectedly — by Schabowska. While the official reason was simply that his contract wasn’t renewed, Wegman believes that Olendzki was fired for being a more moderate member of the Law and Justice party.

The list of affected cultural figures who have lost their positions under the current regime is extensive, and even includes Morawski, the now ex-artistic director of Teatr Polski whose appointment prompted Lupa to postpone “The Trial.” In many of these cases, refusal to renew a contract is the mechanism by which directors are ousted.

“Everybody has lost here except the Law and Justice party,” Wegman said. “If that happens at this lower cultural level, imagine what’s happening where everybody is making the higher up decisions. At the end of the day, this isn’t the end of the world, but it’s certainly indicative of what’s going on in Poland.”

Wegman says the Skirball Center took a financial hit, having already started the costly visa process for the 46 visiting Polish artists. But that doesn’t mean New York audiences won’t be able to hear the story’s message, one that mirrors the predicament which got the full-scale production scrapped.

“We needed to remain vocal about this,” Wegman said. “We could have just said this was cancelled, but why? Especially because Lupa created this production in response to what’s happening around the world right now. Because ‘The Trial’ — the whole narrative of ‘The Trial’ — responds to a nightmarish situation where no one knows what’s going on, people in charge are telling lies. For that reason I wanted to bring it too, especially as we move into our election cycle.”

On March 8, the Skirball center along with The Public Theater, New York Theatre Workshop, PEN America and CUNY’s Segal Center will present a free marathon reading of the novel. Among the readers will be Salman Rushdie, a member of NYU faculty and a writer who knows a bit about censorship himself. Lupa will hold a panel discussion before the reading.

In a statement, the director didn’t mince words, placing the blame for the cancellation directly on the man in charge of Poland’s cultural institutions.

Nowy Teatre, the company set to perform “The Trial” told The Calvert Times in a statement, “Since Nowy Teatr didn’t take part in any negotiations or correspondence between the Adam Mickiewicz Institute and Skirball concerning a possible grant to support the presentation of The Trial, it is difficult for us to have a clear view of the situation.”

The Kafkaesque story of how Kafka’s “Trial” got cancelled