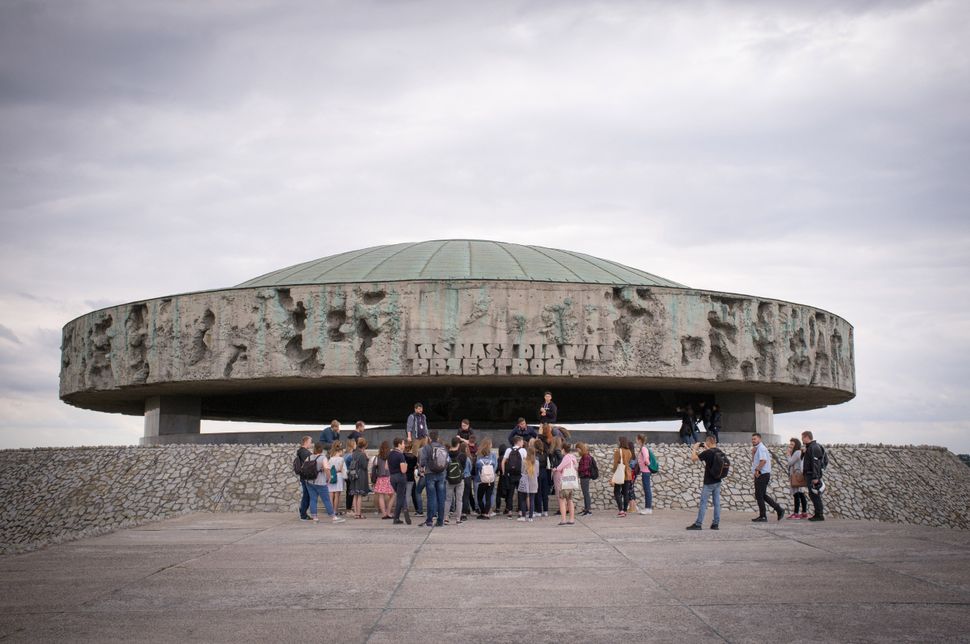 The Monument to Struggle and Martyrdom and the Mausoleum at a former concentration camp in the now State Museum at Majdanek, Lublin, Poland. Image by Getty/Chuck Fishman/Contributor

Continuing a trend, in Poland, of political objections to artwork concerning the country’s role in the Holocaust, a nationalist Polish governor is suing an art curator for defamation.

The work, titled “Judenfrei” — the Nazi term for an area “cleansed” of Jews — commemorates World War II-era pogroms in the city. Nieznalski’s installation took the form of a heap of signs bearing the names of Jewish population centers in Lublin where Nazis conducted mass murders and roundups of Jews in the early 1940s.

Lublin’s governor and an incoming member of Polish parliament, Przemysław Czarnek, ordered the removal of the work on state television, calling it “anti-Polish.” Kitliński refused to budge. Soon after, Czarnek received an honorary medal from Marie Curie-Skłodowska University in Lublin. Kitliński, who teaches at that institution, did not mince words about his feelings on this development.

“The governor of Lublin Region prides himself in offending Ukranians, Muslims, the LGBT community and women, for whom he sees no social role other than the reproduction of children,” Kitliński wrote in an online open letter, according to Art Newspaper.

Czarnek’s defenders responded with outrage; the religious radio station Radio Maryja — an entity that has been condemned by the Anti-Defamation League and the Catholic Church — called Kitliński anti-Polish. And Czarnek himself sued Kitliński for defamation for the online post.

Should Kitliński be found guilty, he may face up to two years in prison for slandering a public official.

Since 2018, when the governing nationalist party in Polish parliament voted to make suggesting Polish complicity in the Holocaust illegal, displays like Nieznalska’s have been controversial. Indeed, associating Poland with any historical acts of anti-Semitism is risky.

Dariusz Stola, the director of Polin, Poland’s Jewish museum, recently ran afoul of the government, first by objecting to the 2017 law about Polish involvement in Nazi crimes, and then for producing an exhibition about the country’s 1968 anti-Semitic purges. (The museum’s stakeholders convened a panel to find a new director and Stola won the votes to resume his duties, but the Polish minister of culture, who needs to formally reinstate him due to the government’s sponsorship of the museum, has yet to reappoint him.)

“In Poland, there has been an official ban on criticizing historical memory for a long time,” Niesznalska wrote to Artnet News in an email. “In this case, of course, it was a denial of the fact that the Poles pogromed the Jewish community during or just after World War II.”

“I’ve been made a scapegoat for all progressive causes that the far-right despise, and feel personally threatened,” Kitliński told Art Newspaper after Czarnek filed suit. “By accusing me they intend to send a signal of intolerance to the population at large.”

But Kitliński has a coalition of fellow art professionals in his corner. An online petition with over 770 signatories, including academics and art world celebrities, appeared online in support Kitliński, echoing his criticisms of Czarnek and calling Czarnek’s honorary medal “a blatant attempt to normalize misogyny, homophobia, xenophobia and racism.”

For his defense in the lawsuit, Kitliński will claim his constitutionally-protected right to free speech.

“This represents an attempt to close down free speech and open discourse on human rights,” he told Art Newspaper.