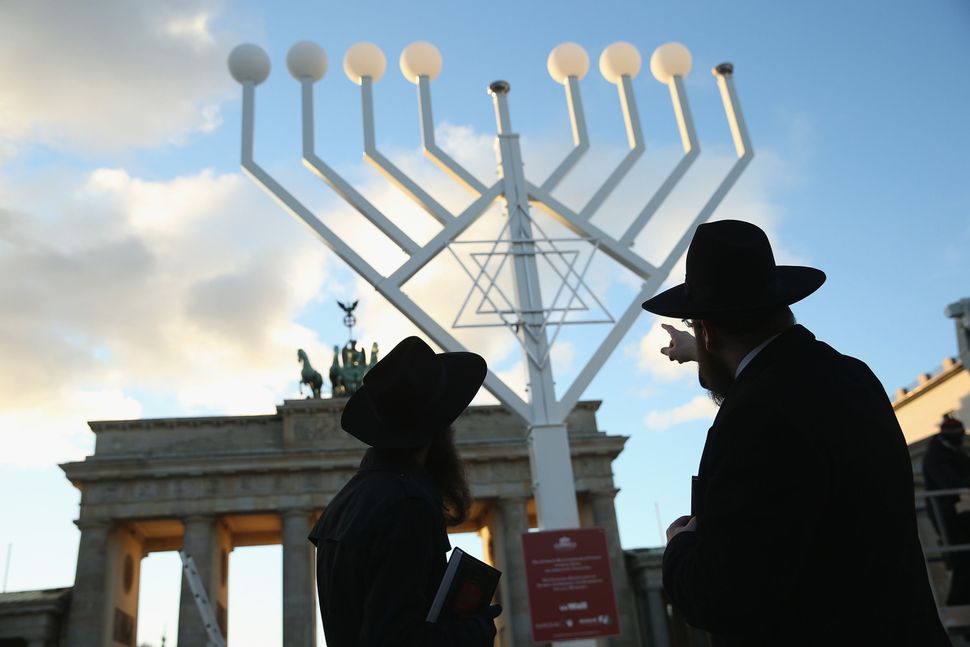 A menorah outside the Brandenburg Gate, Berlin Image by Getty/Sean Gallup/Staff

“German society, we have an increasing anti-Semitism here,” said Andrei Kovacs. “You can feel it as a Jew. I can feel it on my skin.”

But Kovacs, a Romanian immigrant to Germany, has a plan to combat that bigotry: He’s the executive director of a government-backed effort to highlight the deep roots Jews have in Germany through a year-long festival.

The association behind the festival — called 321-2021: 1,700 years of Jewish Life in Germany, or 321 for short — takes its name from the first empirical evidence of Jews living in middle and northern Europe: An edict from 321 C.E. signed by the Holy Roman Emperor Constantine, allowing Jews to hold posts in the empire’s government in Cologne, now the fourth-largest city in Germany. It wasn’t exactly a privilege to serve in these positions — Jews were only allowed to occupy them because of a dearth of nobility willing to serve — but the edict, which is kept in the Vatican, shows that Jews were a significant, civically-involved population in the region from late antiquity.

In April 2018, Jürgen Rüttgers, an ex-minister of North Rhine-Westphalia, and Abraham Lehrer, vice president of the Central Committee of Jews in Germany, founded the 321 association in the Cologne Synagogue with the aim of commemorating the 1,700th anniversary of Jews in the region. Since then, the association’s membership has grown to include the Central Council of Muslims in Germany, Protestant and Catholic leaders and government institutions. Germany’s anti-Semitism commissioner, Felix Klein, formally announced initial plans for the festival on January 21 in Berlin, six days before the 75th anniversary of the liberation of Auschwitz.

The festival, funded by Germany’s Interior Ministry, Cultural Ministry and the states of North Rhine-Westphalia and Cologne, among other partners, was prompted by rising anti-Semitism, lapsing memory of the Holocaust and a desire for today’s German Jews to be seen and heard.

The escalation in contemporary German anti-Semitism most recently made international headlines on Yom Kippur 2019, when a gunman in Halle attacked a synagogue. No congregants were killed, but a pedestrian and a patron at a nearby kebab shop died in the attack. The Halle shooting followed an upswing in reports of anti-Semitic attacks that ultimately led German politicians to suggest religious Jews not wear kippot in public.

The rise of anti-Jewish attacks, Kovacs said, is partly due to a generational shift.

“Young people, they don’t remember the Holocaust anymore,” he said. For those that do, “Jews are basically the history of death.“

At the same time, Kovacs noted, Germany hosts a growing Jewish society, with over 100,000 Jews — many from the former Soviet Union — living in the country. Since 2000, over 50,000 Jews have become German citizens, bringing the country‘s Jewish population into the six figures for the first time since the 1940s.

321 will hold its main state event on February 21, 2021. The event will incorporate art and music ,and may feature German President Frank-Walter Steinmeier, with whom the association is currently in talks.

“We want to do it in a cool way, to talk to young people,” Kovacs said. “One of the bigger projects that we are planning is the worldwide biggest Sukkot party.” The Sukkot party will invite Jews and non-Jews to build their own sukkahs on city streets. The festival will also highlight Germany’s Jewish heritage through live concerts, dancing, the publication of a Jewish food guide and commemorative stamps. The festival’s planners are taking extra care to reach communities with fewer Jews outside major cities like Berlin and Frankfurt. The ultimate aim of the project is to build bridges between Jewish and non-Jewish community members, Kovacs said, as Judaism can be somewhat “mysterious” to many Germans, who may view it as more of a religion than a culture.

Kovacs also hopes to engage young Jews of German ancestry, most of whom now live in other countries like the U.S., U.K. and Israel. “I see a lot of young musicians, young artists that are really asking themselves questions about their German, Austrian heritage,” Kovacs said. “I think that’s a very interesting fact that we should put a spotlight on.”

But while the festival will acknowledge the past, it aims to be relevant to the concerns of today.

“We as Jews, we want to be seen as a living part of the society,” Kovacs said. “We’re not a museum. We’re not dead; we’re alive.”