Cardinal Timothy Dolan, archbishop of New York, observes a shofar that was blown at Auschwitz. Image by Courtesy of the Author

One day after the 75th anniversary of the liberation of Auschwitz, faith leaders from around New York City gathered to view artifacts from the former death camp.

“We are very focused on being part of a broader effort to educate people of all faiths,” said Jack Kliger, the president and CEO of the Museum of Jewish Heritage, which is currently hosting the exhibit “Auschwitz. Not long ago. Not far away.” “Having religious leaders join and come through here — many of them already know the story. What we want is for them to tell their followers to come and understand the story.”

Press were only allowed to follow the group, which included New York Archbishop Cardinal Timothy Dolan, for a brief time at the beginning and end of their tour of the exhibit. 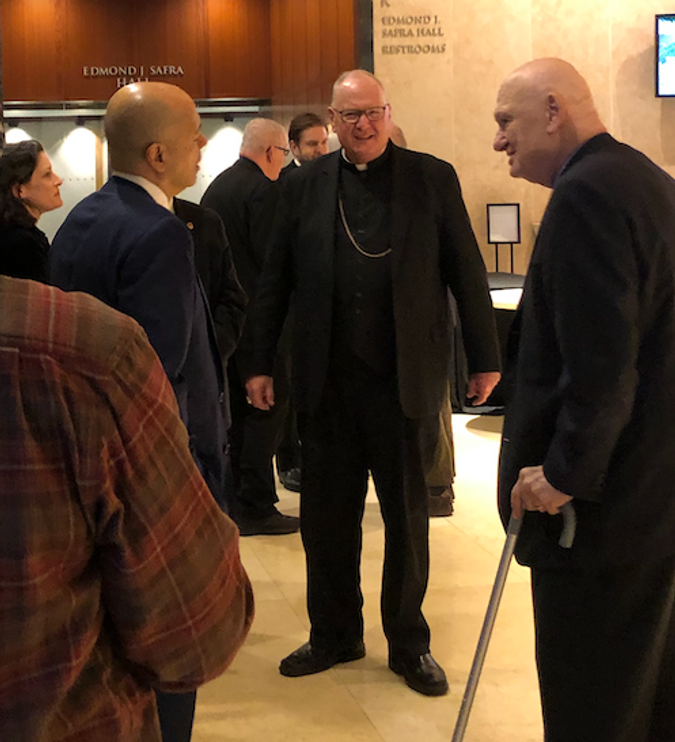 Cardinal Timothy M. Dolan, archbishop of New York, in the lobby of the Museum of Jewish Heritage with its president and CEO, Jack Kliger. Image by Courtesy of the Author

Between the start and end of the tour, Dolan went from ebullient — embracing rabbis and priests in the lobby, greeting reporters by saying “Nice to see you,” and informing a visitor from New Zealand that he loves her country’s lamb chops — to being at a loss for words.

The assembled clergy began their tour by considering the understated initial U.S. response to word of the atrocities committed in the infamous concentration camp.

“Exactly 75 years ago to the day, this is the paper that was produced,” exhibit curator Robert Jan van Pelt said, showing the group a front-page article from The New York Times dated the day after the Soviet Red Army freed Auschwitz’s last prisoner.

“Buried inside an article on the advance of the Red Army is a small paragraph right here that talks about the liberation of the Auschwitz camp,” van Pelt said, pointing to where the article continued on the paper’s third page. “They know that 1.5 million people were murdered here,” he said. “Strangely enough it’s not worth a separate item or even a sub-headline.”

Dolan began the tour with an athletic stride, his hands in his pockets, the chain of the gold cross on his chest glinting on his black waistcoat. He occasionally rocked forward to get a better look: at a wheel shaft from a train car that transported people to Auschwitz, or wall text devoted to the gas chambers. At one point toward the end, when van Pelt referenced Thomas Aquinas, Dolan noted that the day of the tour was that saint’s feast day.

The tour’s final room was devoted to spiritual resistance to the Shoah’s horrors. The gallery contains not just Jewish religious items — a tallit, a prayer book — but Christian ones as well. Cardinal Timothy Dolan, archbishop of New York, observes a shofar that was blown at Auschwitz. Image by Courtesy of the Author

When van Pelt told the story of a shofar in the gallery that was blown at Auschwitz, Dolan’s head reeled back, as if in shock. When van Pelt went on a detour to analyze the Akedah — the biblical incident in which Abraham nearly sacrifices his son Isaac to which the shofar is often linked — Dolan relaxed, nodding along in agreement. But when a trustee played the audio of the shofar, Dolan stood stock still, at one point steadying himself against a display case.

A room full of people of different creeds, colors and ages. Women and men, some in Roman collars,= and some in yarmulkes — nearly all used to sermonizing and homilies — were quiet, letting the plaintive sound of the horn bear its testament: Faith can survive and help us to survive.

With that, the tour ended. While many lingered, Dolan left, alone, for the next room. An intimate gaggle of reporters waited anxiously for him to emerge for a press conference. When he did, his attitude was notably subdued.

“You’re going to find this strange,” he said, “but I don’t want to say anything. I remember Pope Benedict visited Auschwitz. He, at the end —– he had a talk ready —– and he said the only ‘appropriate response to this is silence.’ Silence.”