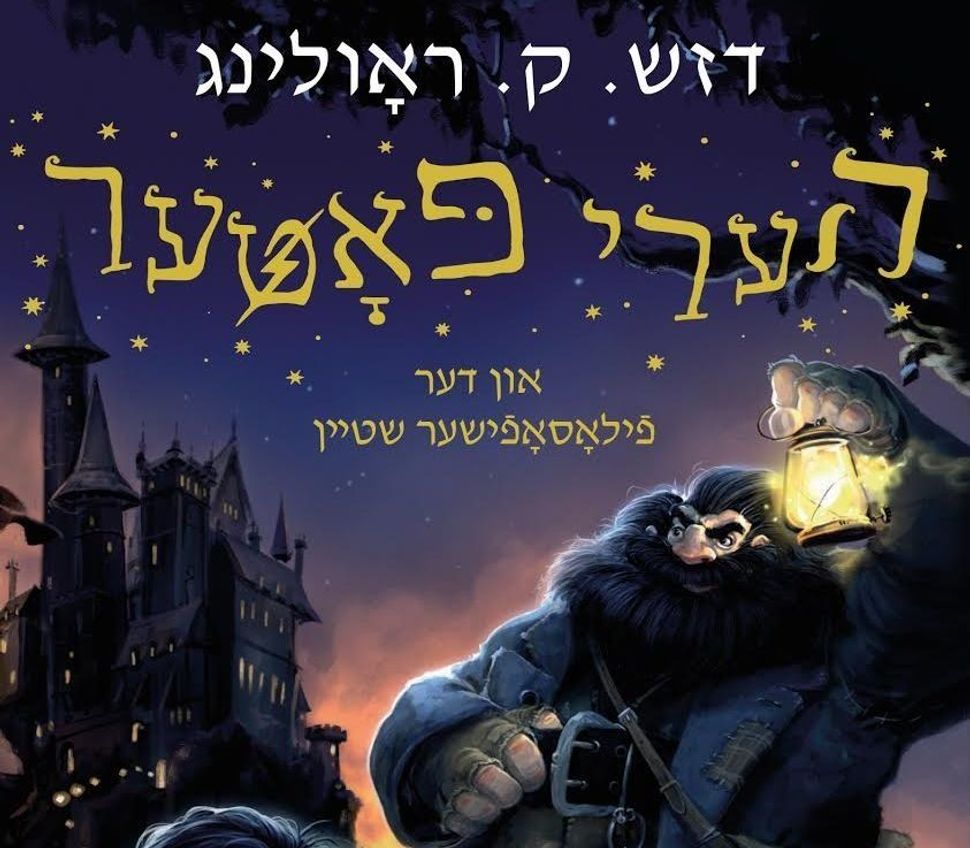 When Arun Viswanath, the Yiddish translator of J. K. Rowling’s worldwide bestseller “Harry Potter and the Sorcerer’s Stone” was 12 years old, he suddenly had a revelation that made him feel dejected. Although he’s a grandson of the venerable Yiddish linguist Mordkhe Schaechter, the son of the Yiddish poet Gitl Schaechter-Viswanath, and spoke the language with his extended family, including a dozen cousins his age, he had opened a Yiddish storybook only to realize that he didn’t recognize many of the words.

“That really frightened me, it depressed me,” Viswanath, known as Arele to his Yiddish-speaking friends, told the Forverts. “Ever since then I’ve felt a lot of pressure to speak Yiddish well. I began reading a lot more Yiddish and making flashcards of words I didn’t know.”

Around the same time, Viswanath, like hundreds of millions of kids around the world, read the first volume of the Harry Potter series. “To tell you the truth, it didn’t really grab my attention. I read it and that was that. I would never have imagined that the book would become a big part of my life.”

Viswanath continued working to improve his knowledge of Yiddish. He read widely in the language, studied the intricacies of different dialects and strove to reduce the influence of English phraseology on his Yiddish. Among his Yiddish-speaking friends and family he gained a reputation as someone to consult whenever they had a question about an obscure Yiddish phrase or needed to translate something into an idiomatic Yiddish. He wanted to help Yiddish speakers improve their knowledge of the language, but he didn’t know where to begin.

In October 2017 his wife, Tali Adler, a “Harry Potter” super fan, suggested that he translate the first book of the series into Yiddish.

“Do you really want to raise Yiddish-speaking kids in a world without Harry Potter in Yiddish?” she asked.

Viswanath liked the idea in principle, but wasn’t sure if he was up to the task. Despite knowing the language better than almost anyone his age — he was 26 at the time — he felt that his abilities were no match for his late grandparents who had been surrounded by native Yiddish speakers in the United States, not to mention his great grandparents in Eastern Europe who spoke it when millions of Jews used the language as their daily vernacular. 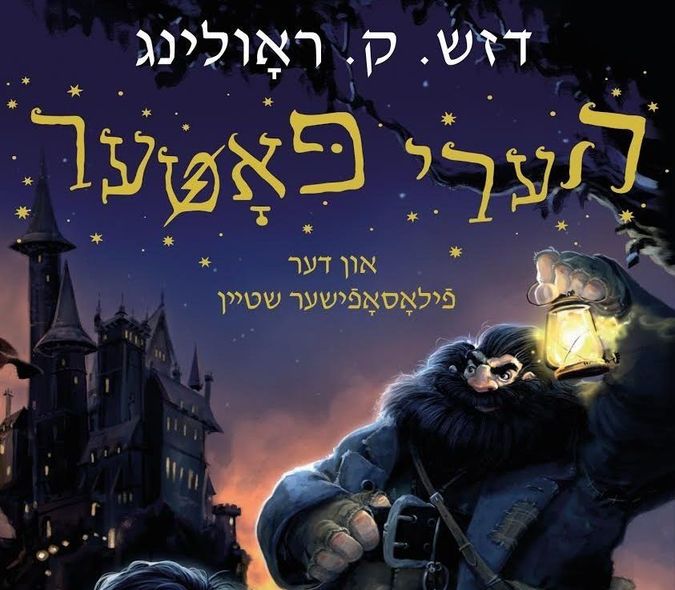 Besides her prodigious skill at creating fantastical worlds and writing plot twists that keep young readers turning the pages, Rowling is also a gifted philologist whose knowledge of Latin, French and Old English adds great depth to her work. The names of many of her characters are crafted in such a way as to evoke in the reader a nearly subconscious understanding of the character’s nature. The same goes for the names of forests, streets and shops as well as the terms for numerous animals, plants and magical objects of Rowling’s invention. To have any hope of competently translating all of this, a translator needs to understand the linguistic elements that Rowling welded together and then find equivalents that create the same effect in the target language.

It’s such a tall order that several articles in academic journals of philology, linguistics and translation studies have explored the different approaches translators have taken in rendering Harry Potter into other languages.

After consulting with several Yiddish experts, Viswanath took on the challenge. He organized an informal advisory committee to consult with on matters of stylistics and translating Rowling’s magical terminology. He also recruited translation editors, chief among them the linguist Yaakov Blum and Viswanath’s mother Gitl Schaechter-Viswanath.

Setting down to work, Viswanath created a glossary of hundreds of specialized terms. He tracked down words and terms associated with magic, British foods, boarding school life (prefect, head boy, etc.) and dozens of rare plants, which most Americans couldn’t identify in English, let alone Yiddish.

“In order to get to the bottom of what Rowling means with a certain term you have to read all seven books,” Viswanath said. “With mythological and magical creatures you have to understand what its most important characteristics are. A kobold — a mythical creature in German and Yiddish folklore – “is not the same as a goblin; and one goblin can be very different from another. Only then can you turn to Yiddish sources and try to find something that matches.”

Several examples shed light on Viswanath’s approach to translation. For the student houses at Hogwarts, Viswanath translated some of their names literally, while others were transliterated. Gryffindor becomes Goldngrif: The “gryff” in the English original refers to the griffin, a mythological creature that is part lion and part eagle, which Viswanath kept in his translation — in Yiddish it means “vulture” rather than griffin — while translating dor, which means “of gold” in French. Similarly he translated the house name Ravenclaw as Robnkrel. While there are several Yiddish words for raven and claw, Robnkrel is the only combination that approximates the sound and rhythm of the original. For Hufflepuff, which has no discernible etymological meaning, he chose to keep the name as is.

Character names presented a similar tension between translating literally and maintaining the sound and rhythm of the original. Viswanath translated the alliterative name Emeric the Evil as Emrikh der Umerlekher (literally: “Emeric the dishonest”) and Elfric the Eager as “Elfrikh der Eyferikher” (Literally: “Elfric the Passionate/Jealous”). 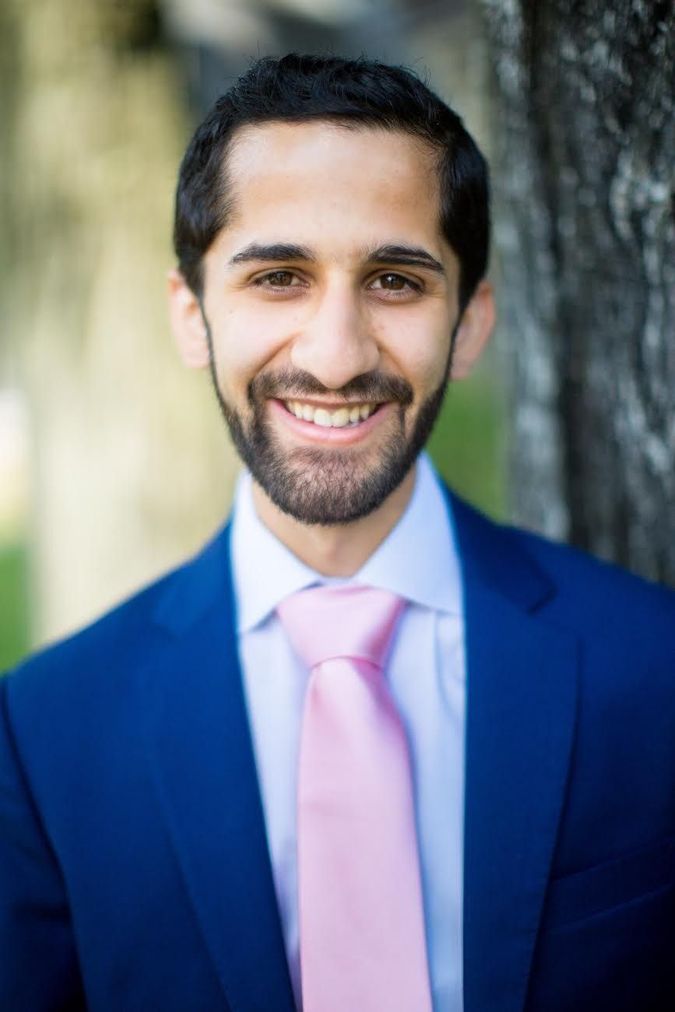 As far as plants, a key aspect of Rowling’s imagined world, Viswanath sought out equivalents for dozens of obscure trees, shrubs, roots and types of moss that are used in magical potions or that appear in the book’s many colorful place names. As millions of children know, Harry Potter lives on Privet Drive. But few readers know that a privet is a type of shrub frequently used in hedges. The Yiddish word for privet is liguster. So in the Yiddish version Harry Potter lives on liguster gas.

Wolf’s bane, a flower that has been used for centuries to create both medicine and poisons, appears frequently in the potions that students at Hogwarts brew. The traditional Yiddish term, velfisher sam — literally “wolf’s poison” — appears in Viswanath’s translation. But Viswanath used a different strategy for rendering devil’s snare, a hallucinogenic plant long associated with witchcraft in Europe and voodoo in Haiti, into Yiddish. Although there is an equivalent Yiddish term for the plant listed in some dictionaries, it’s obscure. So Viswanath chose to literally translate the English name into Yiddish as tayvl-pastke (“devil-trap”) to evoke the same feeling in the reader as the English original.

To find equivalents for magical and mythological creatures Viswanath consulted several Yiddish works on the topic alongside dictionaries and articles in folklore journals. Some mythological creatures, such as karlikn (dwarves), volkelakn (werewolves), vampirn (vampires) and eynherner (unicorns) have exact native equivalents in Yiddish. For those such as trolls, zombies, banshees and ogres, which are the same in most languages, Viswanath opted to transliterate the English words. And he took some mythological creatures from Yiddish folkore, like ghosts and demons, and relocated them in Rowling’s magical England: hag becomes koldunye, which, like its English equivalent, is an old-fashioned term for a witch. Ghoul, a demon from Arabic folklore that feeds on fresh corpses, becomes lantekh, a cross between a goblin and a poltergeist in Yiddish folklore.

Viswanath’s deep knowledge of lexicography and philology comes across in his translations of the fictional coins used in Rowling’s wizarding world. The smallest coin used in the series is called a “knut,” which in Yiddish is rendered as a niksl. Why? Viswanath believes that “knut” is a play on words. If the “k” is silent, it would be pronounced like “not,” which makes sense considering that it is the wizarding equivalent of a penny, and therefore nearly worthless. In medieval Yiddish niks means “not,” and a “niksl,” its diminutive, means roughly a “trifle.” Additionally, assuming the “k” is indeed silent, both words are near homophones with their language’s respective equivalents for “nut” — in Yiddish: nisl — a food long associated with coins of small valuations.

Finding Yiddish equivalents for invented or obscure words was, however, not Viswanath’s hardest task in translating “Harry Potter.” Although he wanted the Yiddish text to read naturally, he had to tread a fine line between using folksy Yiddish terms and overly Judaizing the world of Harry Potter on the other. Unlike some recent translations of American, British and German literature into Yiddish, Viswanath chose not to change any of the Christian elements in the text. Harry Potter and his friends still celebrate Christmas and Easter, and it’s clear from reading the Yiddish text that in the book, both wizards and non-wizards alike aren’t Jewish.

“I wanted to present the text in Yiddish, not change who the characters are,” Viswanath explained.

But how should a British, presumably Christian wizard sound in Yiddish? Because many of Rowling’s characters speak in thick regional English dialects, Viswanath used his knowledge of Yiddish dialects to mimic the variations in speech.

“I tried to transpose the wizarding world onto a map of the Yiddish-speaking world” — pre World War II — “without making the characters Jewish. Filch speaks in a thick Lithuanian Yiddish accent and doesn’t pronounce the ‘sh’ sound, so he says sabes instead of shabes, and Hagrid, who despises him and speaks a very distinct rural English, speaks in a thick, almost exaggerated Polish Yiddish. I thought this was a good approach because it helps show the tension between them. As for Snape and McGonagall, well, they’re Litvaks. They just are.” Like a rabbi, Dumbledore uses many words of Hebrew and Aramaic origin in his speech. “Not because he’s Jewish,” Viswanath added, “but because he’s learned.”

After more than two years of hard work Viswanath hopes that a diverse group of Yiddish readers and language students will enjoy his translation and use it to improve their knowledge of the language. He’s already begun translating the second volume of “Harry Potter”, with the Yiddish title “Heri Poter un di soydes-kamer.”