What to read while socially distancing? Here’s what the Forward staff recommends. 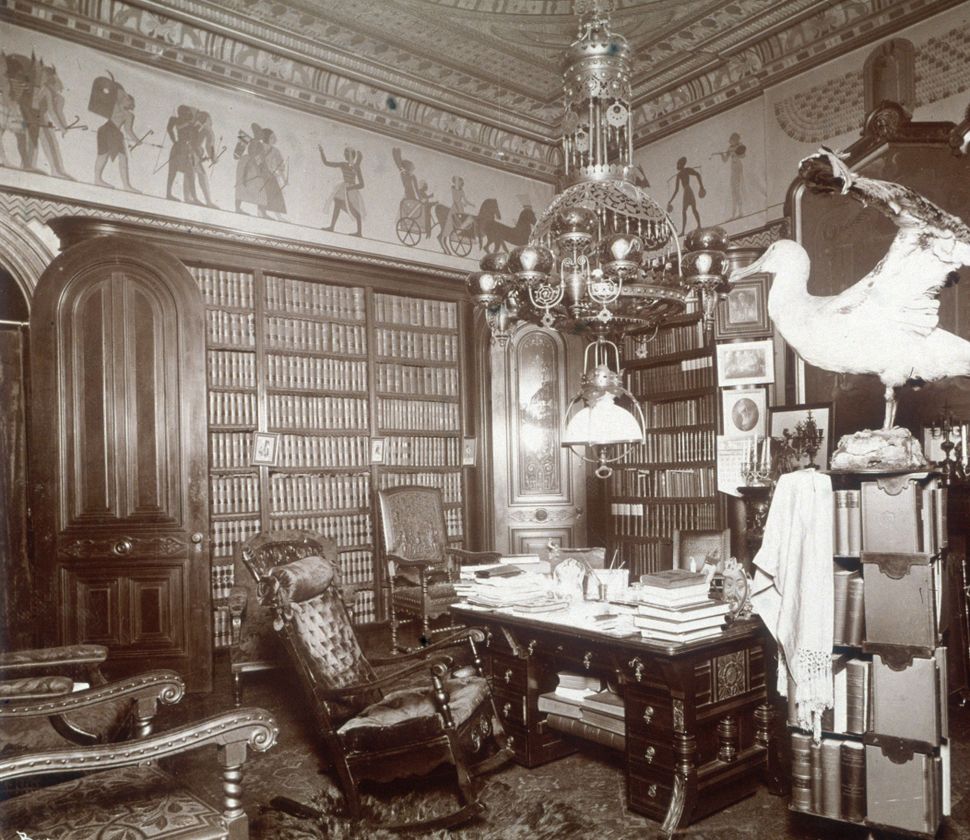 1899: The library at Chauncey M. Depew’s home in New York City. Image by Museum of the City of New York/Byron Collection/Getty Images

As we socially distance to combat the novel coronavirus outbreak, many of us have a bit more time to read these days. But it can be hard to know where to start. The Forward staff has been thinking quite a bit about what constitutes an appropriate syllabus for the age of COVID-19: Here are our suggestions, from much-needed escapism to apocalypse reads and in-the-weeds analysis of our current moment and its pandemic predecessors.

Nonagenarian New York City resident Segal arrived safely in the United Kingdom as part of a kindertransport with several hundred other children, and immediately embarked on a letter writing campaign that saved her parents, who were still in Hitler’s Vienna. Hers is a child survivor’s tale chronicling how her formerly upper-middle-class parents — her father a banker and her mother a highly-educated musician — arrived in the United Kingdom as refugees from an enemy country and accepted work as domestics in the British countryside. Not always permitted to live with them at their jobs, Segal was fostered out and sent to live mostly in other people’s homes. The book is an autobiographical novel, but I’m reading it as a memoir of a refugee childhood sheltering in the place of an anxious freedom from near certain death under Hitler’s reign, as well as a fascinating look into other people’s lives.

I always return to 221B Baker Street’s resident sleuth. I suspect that Doyle — a physician when not writing — mocked up his Holmesian adventures with a kind of medicinal purpose in mind. Something about their rhythms, stuffy dialogue and neat conclusions is always soothing. Sherlock probably couldn’t solve a pandemic of the sort we’re now facing (his brother, career civil servant Mycroft Holmes, might be able to), but he always succeeds in calming me down.

I’m dealing with moments of stress by dipping in and out of a collection of Maurice Sendak’s essays and reviews that I picked up at a used book store over the holidays. Sendak, known for his beloved children’s books, was well aware of how dark the world can be, but also had a remarkable talent for accessing its joy. His writing for adults may not be his most popular work, but right now, it’s helping me learn how to balance realism and hope. Plus, it’s just plain fun to watch his mind at work and play. “Is there a real Mother Goose?” he wonders, entirely seriously, in an essay on that eminently respectable figure. What a wonderful question to ask, even — or especially — now.

This is somewhere between a worst-case scenario and a comfort read, to me. “Station Eleven” does take place in a decimated, post-apocalyptic landscape in the Midwest, but it’s actually about the importance of art, community and humanity — even in the worst of times. The novel follows a troupe of actors and musicians who travel between the small surviving communities performing Shakespeare. In a way, this dystopia is almost utopian. Their commitment to art is inspiring, and it’s a quick read.

I just read Naomi Alderman’s tour de force over Shabbos. It’s like the anti-coronavirus story: a book about female power spreading across the world. It made me livid that I can’t electrocute every man who displeases me.

This book is the perfect combination of totally gripping and deeply moving. It’s a hilarious but also devastating look at North Korea, a romance that’s threaded with a brilliant meditation on freedom.

Elizabeth Strout is, I believe, the most undersung writer working today. Reading Strout is like doing one of those workouts where you realize you had muscles you didn’t know about because they hurt, but for corners of your heart. It was hard to pick just one Strout book, but this is a good one to start with.

It’s a bildungsroman about a freshman at Harvard written in the style of classic Russian literature. It’s endlessly frustrating, relatable and beautiful. It’s been a month since I’ve read it, and I still want to go to Harvard — nevermind that the campus is closed — and study linguistics. I’m not sure if it’s a passing phase because the book had that much impact or if it made me realize something about myself. Either way — read this book!

The scale and impact of the novel coronavirus has been frequently compared to the 1918 Spanish Flu epidemic. Spinney’s book explores how that flu spread and, compellingly, how citizens from every strata of society, on all continents but Antarctica, responded. Russian Jews gathered in graveyards to hold weddings to ward off the virus; sitting U.S. president Woodrow Wilson was infected but made no public statements about the pandemic; countries closed their borders and blamed other nations for the flu’s forward motion on their home fronts. Spinney argues that this period of panic and mass death shaped the 20th century’s geopolitics, informing breakthroughs in science and art and changing the way we think of containment and global response.

The titular risk of Lewis’ slim and very readable book is the brain drain from government bureaucracies that has intensified under President Trump. Case in point: Many of us have read about how the Trump administration closed its pandemic office in 2018, leaving the federal government without a central staff of experts prepared to coordinate a response to the situation we’re in right now. Lewis takes the reader deep into the line items of the federal budget to show us how important bureaucrats are to a functioning society, let alone a society under imminent threat from a deadly virus. The book will educate and infuriate you, and maybe even make you want to go to work in Washington.

For a worst-case scenario

This cinder block of a book, inspired by a terrible Blue Oyster Cult song, imagines the accidental release of a viral agent of death and the subsequent dissolution of American society. The survivors of the military-made superflu flock respectively to a supercentenarian matron and an evil supernatural dictator and ready themselves to face off in the titular “stand,” in which nuclear disaster is a possibility. So, the good news is that we’re not there yet. In its direness, King’s ever-spooky prose just might make you feel better about the current state of things.

This slim novel was critically acclaimed upon its release; little did we know how relevant it would be so shortly after its debut. “Severance” features a young woman, Candace Chen, following her escape from a post-apocalyptic New York after a strange contagion has decimated the U.S. Ma takes a dry, sharp tone as she juxtaposes late-stage capitalism and office bureaucracy with the breakdown of society, deftly weaving scenes from Candace’s former life into the narrative of her life on the road. And it’s not all apocalypse! Ma’s wry observations are just as on-the-nose when talking about the life of an immigrant — or even that of a publicist.

What to read while socially distancing? Here’s what the Forward staff recommends.