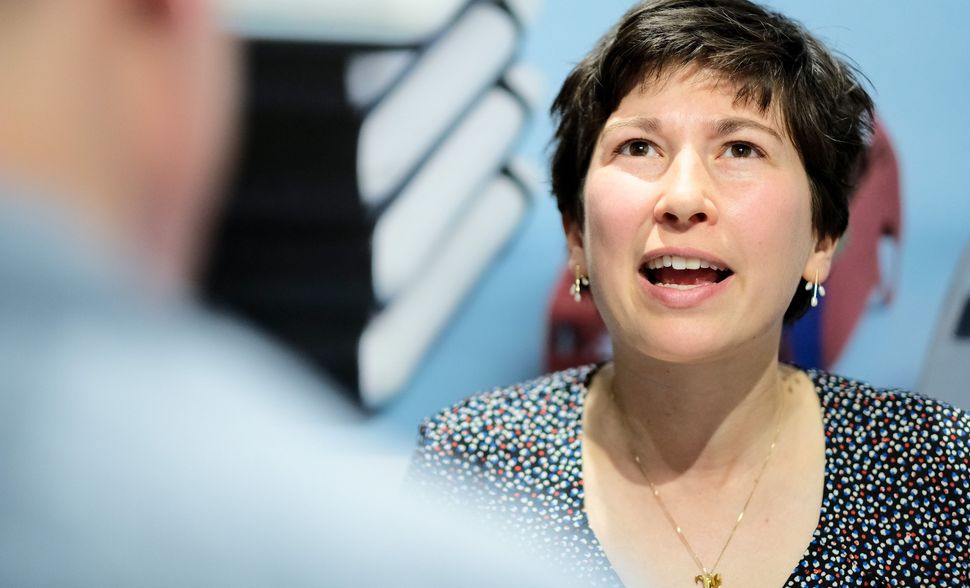 Cartoonist Liana Finck is a prolific author, contributor to the Forward and The New Yorker and, now, a collaborator with two of the most famous musical artists on the planet.

Late last night, in the Bob Dylan surprise content hour, Justin Bieber and Ariana Grande dropped their latest single, “Stuck With U,” a duet that speaks — mostly indirectly — to the coronavirus pandemic that has left many couples and families socially-distancing together at home. The track’s cover art is a drawing by Finck, showing a two figures holding hands in the corner of a gable-roofed house, and its music video features text modeled after her handwriting.

I reached out to Finck, a longtime fixture of these pages, to chat about this new development, her work habits in the pandemic and her plans for a new, graphic novel take on the Torah’s first book. The following conversation has been edited for length and clarity.

PJ Grisar: You do so much but this seems like something slightly new for you. Have you ever done art for music?

Liana Finck: I actually did one thing right before. By coincidence this one person who never published music before, even though she was a seasoned musician, asked me to help her make a music video. Her name’s Christina Skramstad’s and her band’s called “City Dress.” I did the drawings for her music video. I love her song, so that might have been the first thing I did. That was a couple weeks before this.

How did this end up happening — are Ariana Grande and Justin Bieber fans of yours?

Ariana is, Bieber is not, as far as I know.

Did she arrange for this to happen?

Yes. She DMed me.

Yeah. I know! It’s like an internet connected feeling of dreamlike-ness where worlds collapse and people you know in your imagination suddenly write to you. She knew me from Instagram, she’s been following me for two years and I’m a fan of hers as well. She’s reposted me before, so it wasn’t the first point of contact. But, I guess it’s connected to being an anxious person who’s been in a crisis, I’m not easily surprised by surprising things so it’s just like “Oh, ok.” I was smiling very hard.

What was your process like designing it? Did they send you the track first?

They didn’t send me the track. [Grande] sent me a description of it and said it’s about being in quarantine with the person you love and even though it’s annoying realizing it’s actually pretty great. And, she didn’t tell me at first that it was a collaboration with Justin Bieber. I came up with a bunch of ideas and I sent them very fast, which is usually my good and bad habit. Some were kind of rough, but luckily she liked one. She reached out a week and a half before she told people to wait for [the track], maybe even less. It was very fast.

The text in the video looks like yours too — is it?

Yes. I wrote out the alphabet. I think they made a font.

This is of course a very socially-distancing-aware project. How are you holding up? How has it affected your process?

I imagine a lot of your process is solitary.

I’m terrified of being alone in real life. I’m like a loner who overdosed on loneliness as a kid. A lot of the topics in my work are about how stressful it is to be social, but that comes from me pushing myself really hard to be around people all the time and to be doing a lot of things. And I found that I really like not doing things. It doesn’t make me feel as horribly lonely as I feared.

What else are you working on?

I’m working on an adaptation of the book of, I guess I’ll called it Bereshit for this venue, as opposed to Genesis with a female God in comics form. It’s due soon, but it’s been very soothing and sweet to work on.

It’s cool that this song’s also for charity.

It is! Part of why I like the video so much is it feels so homemade and you see the real thing. A lot of what I don’t like about huge budget pop culture stuff is you can’t see the real people behind it in a way. I think that’s probably why they used my very grody art for this as opposed to something very high budget.

I wouldn’t call it grody! I do agree that their aesthetic is typically different. How have your friends and family been reacting to it?

I’m learning a lot about friends and family by who’s noticing this. I’m getting a lot of emails from people like my parents’ friends with younger kids and my friends who are cool. Now I know which one of my friends are cool.

Do you usually listen to music when you work?

No. I don’t know why and I feel really bad about it. I listen to music when I’m driving — which is never now — and even when I went to college in the city I started listening only to poetry on tape. I don’t know, I listen when I’m feeling sad and it always saves me. But it feels like letting someone else into my head too much. But I do listen to podcasts all the time — I find them a lot easier to tune out. But I like musicals a lot. When I do listen to music it’s often musicals, folk music. I like a lot of different things, usually with words, I think.

I really like her music. I still don’t think I understand how many people are obsessed with her, but I think she’s a great artist and I’ve always thought she was a really good person – ‘cause she is.