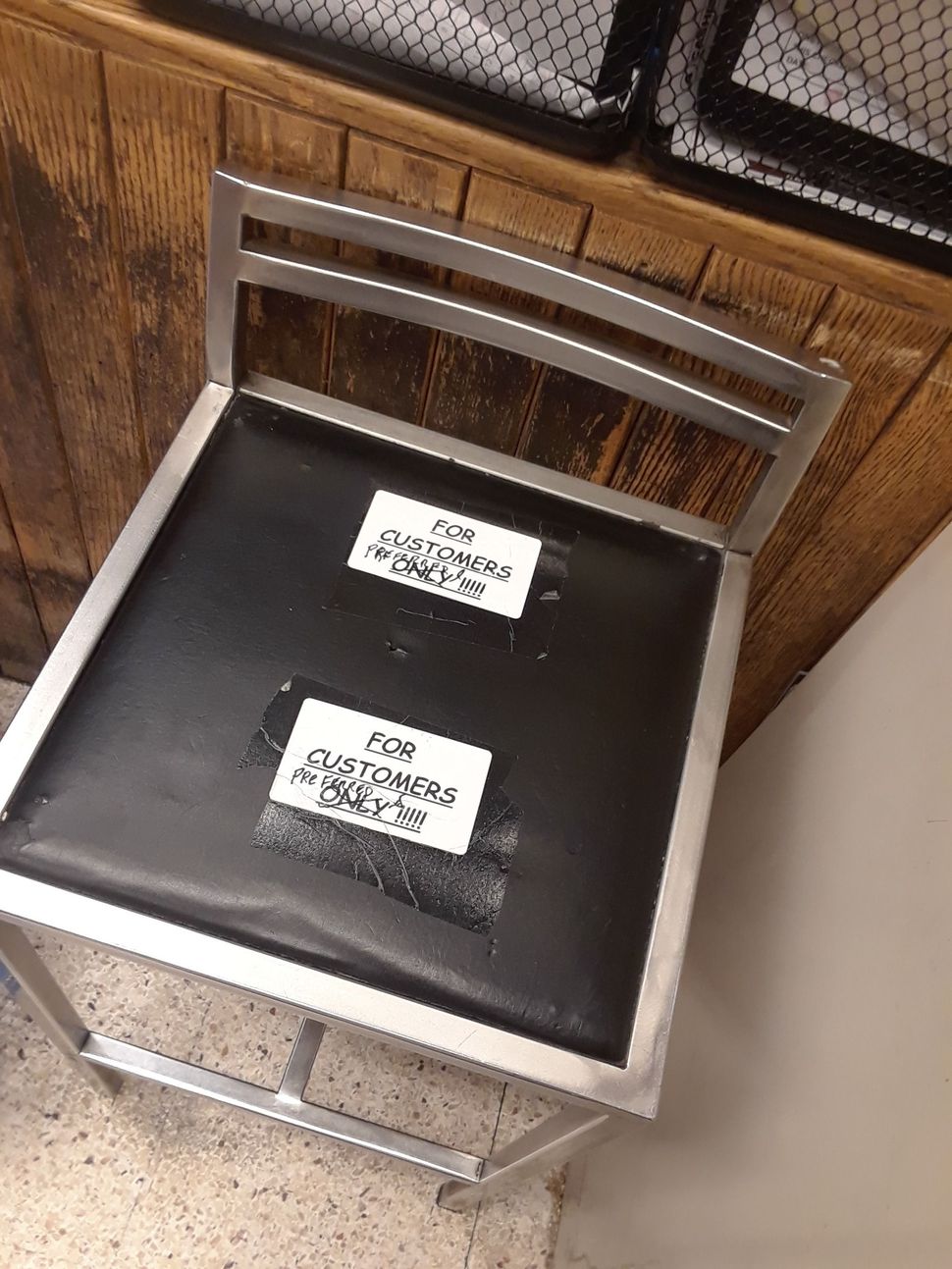 The Infamous Chair: At Zabar’s, this chair is for customers only. But exceptions can be made. Image by Len Berk

It’s located just behind the manager’s desk in between the two time clocks that are used for signing in and out at break time, lunchtime and arrival or departure time. Customers use it when they discuss problems, order merchandise and inquire as to the location of various store items. Without question it’s in a very busy area in the store.

Taped to the seat of the chair is a sign that says” FOR CUSTOMERS ONLY.” Nevertheless, the managers sometimes allow you to place items on it; a vendor’s delivery, an order awaiting pick up. On occasion, you can spot an employee leaning on or sitting on the chair.

You may wonder why I am telling you all this. Rightly so. Allow me to explain. 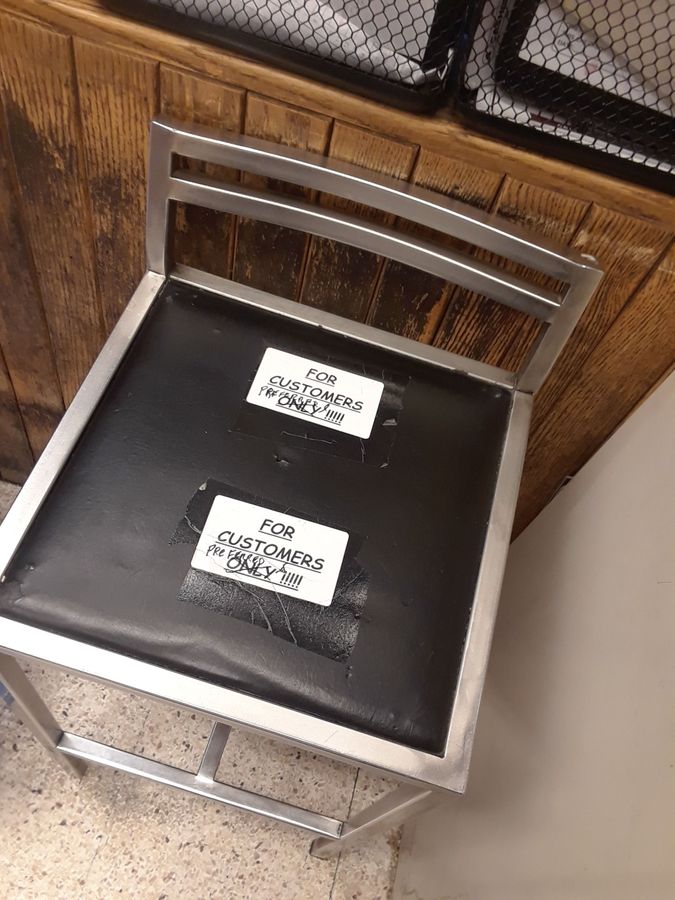 The Infamous Chair: At Zabar’s, this chair is for customers only. But exceptions can be made. Image by Len Berk

Sometimes after I’ve been standing behind the counter, doing my job; trimming the salmon side, slicing smoked salmon (very thin), chopping off the heads of whitefish, filleting the fish, making Nova sandwiches and many other tasks, the manager tells me that it’s time for one of my two daily ten-minute breaks. During these breaks, you can do almost anything you like as long as you do not break any store rules.

On one of these breaks, my feet were aching, so I needed to sit down.

True, I could have gone to the break room, which is also the lunchroom; it’s located in the basement. For me, however, this is not a good solution since getting there requires descending a narrow staircase of about 20 steps, which takes me about three minutes. The return trip takes another three minutes, which leaves only about four minutes of resting time. Instead, I opted to sit for ten minutes on “the chair.”

Saul Zabar, the boss, gave me a look.

“Didn’t you see the sign on the chair — FOR CUSTOMERS ONLY?” he said.

He is older than I am, and I thought that his feet must hurt sometimes too. Still, I made as if to jump up.

Relieved, I reversed my jump and rested on the chair once again.

Rested? Well, there are things you should know about the chair. I think it’s fair to say that it was not made to provide a very comfortable sitting place. The seat is hard and small; maybe 13 by 13 inches. and there are actually two signs on it, both of which say “FOR CUSTOMERS ONLY.” Two signs and they both say the same thing. Sounds pretty serious. The signs sit on about 2/3 of the seat area and are covered with see-through tape. The back, with its empty frame and straight-edged corners, provides little to lean against. Either the legs are of different lengths or the floor beneath the chair is uneven; if you breathe too hard, the chair will wobble. Even so, the chair provides the best solution for sitting when my feet hurt.

The following week, when I once again sat on the chair during my break, guess who appeared? Right, the boss. I immediately started to exit the chair and he said:

What a relief. He must have known I needed a place to rest during my break. Of course he did since we are almost the same age.

I thought I had it all figured out — chair-wise, that is — until a week later. This time, he admonished me again: “The chair is for customers, Len!”

”But Saul’ I said, “You said it was ok for me to sit in the chair. You gave me permission.”

He looked at me. I looked at him. We were both silent.

I got off the chair and walked away.

So, I ask you, what should I have done next week, chair-wise, that is?

A week had passed since I finished writing about the chair.

I carried a copy of my essay in my side pocket. Would I give it to my boss to read? I wasn’t sure.

I was taking care of fish business when he appeared. I asked how he was feeling.

His face and voice were neutral.

I asked him if his sense of humor was in good shape.

He said he thought so.

I reached into my pocket and pulled out the two folded 8 1/2 by 11 inch sheets and gave them to him.

“Oh, you wrote something” he said, “I love your stuff.”

He leaned against the refrigerator and started to read. Minutes passed. He read with a stern expression, then suddenly looked up at me.

“I think we should remove one of the sighs,” he said.

I was speechless, but it didn’t matter because he disappeared as abruptly as he had appeared.

An hour later, he came back.

“I think the sign should say, ‘CUSTOMERS PREFERRED,’” he said.

He stood there a few moments, then abruptly walked away.

An hour later, I passed the chair and noticed the sign had been corrected.

Another week passed and I was back at my station behind the fish counter. My ten-minute break was announced and I opted to sit in the chair.

“Will anything happen today?” I asked myself. “I’ll sit and see.”

Directly adjacent to the chair, there’s a series of shelves where the boss sometimes puts his packages or other items. As I was sitting on the chair, the boss approached the shelves to get some stuff from them. It was too late for me to get up from the seat, which would have been a good thing to do, but the way we were positioned made it impossible to do.

He reached up, and suddenly, I felt an object crash against the side of my head.

I had no idea what had hit the side of my head but it was a solid object and it hurt; suddenly, a second blow to my cranium with substantial force. Whatever hit me was hard, very hard and I screamed out in pain again. One blow on top of the other. It all happened so fast. I sat there not knowing what had hit me twice.

“You know that really hurt,” I told him.

“I didn’t really mean to hit you so hard but that’s the exchange,” he said. “If you sit there, then I can hit you”

I went back to work behind the counter. Did he mean that If I sat on the chair he had the right to hit me? No, it must have been an accident, but what could have caused the blows? Was it the walkie-talkie that he carried on the side of his pants? It had to be accidental. I knew he would never have intentionally hit me.

I guess what he meant was that if I sat on the chair, and got hit inadvertently, that was ok; that was the fair exchange.

So now, upon reviewing the events, I must decide my relationship with the chair. At no time was permission to sit revoked. So the question at hand seems to be, do I accept his terms? Do I withdraw in ignominious retreat? Or do I sit tall in the chair when I feel the need?

What should I do?

Len Berk, the Forward’s lox columnist, worked behind the counter at Zabar’s for 26 years.