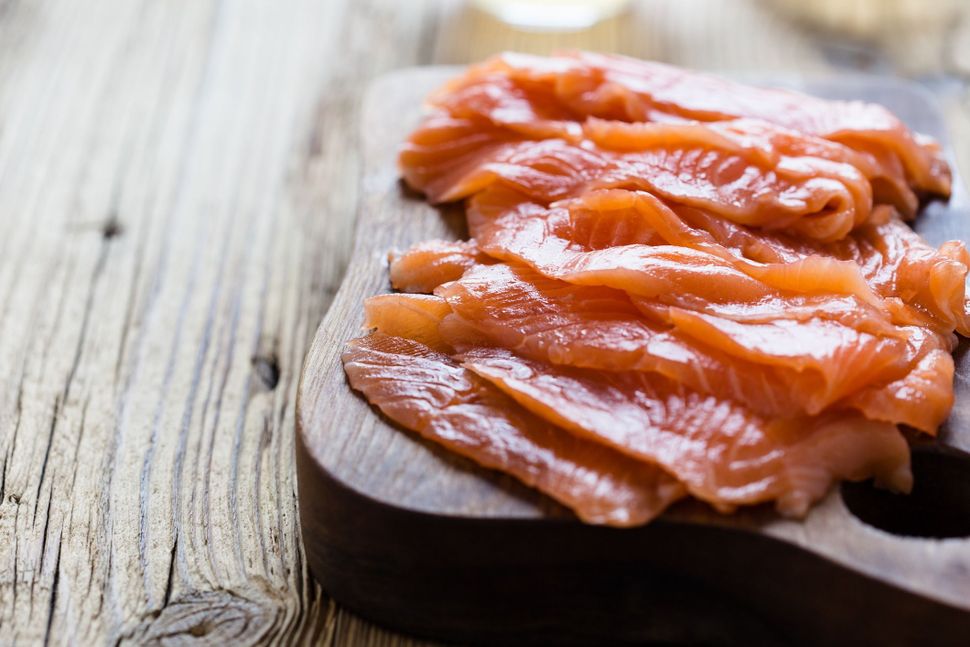 Zabar’s is a slice of life. People scurry from room to room, section to section, walking, looking, seeing, listening, deciding, talking, thinking, tasting. Big people, little people, fat, skinny, tall, short, young and old. They’re all here. I’m watching them. Some of them are watching me. There are as many stories here as there are faces. Here is just one of them:

He stands there in the distance, his black suit and black hat prominent amid the scantily-clothed summertime women who are in the store shopping and escaping the intense heat outside. He stands there, quietly, starring at me, waiting for me to notice him.

I didn’t know he was there until I heard it: “HUH” — the short, baritone second long bellow which always announces his presence. Then, a second “HUH” louder than the first. I look up. He walks toward the counter. He smiles. He is ready.

It never varies — the same repartee almost every Friday. It’s like a one-act play, two characters engaging in fish talk over an appetizing counter.

He starts. “I’m already waiting for you an hour; show me,” he says loudly.

Customers turn and look at him. I reach into the showcase and pick out a belly piece of baked salmon.

I remove the baked salmon from its cryovac wrapping and hold it over the top of the counter so he can get a good look. I hold it quite close to him because, at 105 years of age, his eyes are not what they used to be; nor is anything else, for that matter. I think actually seeing the salmon in all its unadorned glory is wishful thinking on his part but we go through the motions anyway.

Was he really 105 years old? At one of his first visits, when he announced his age, I was skeptical.

“Are you really?” I asked. “Let’s see your driver’s license”

“I don’t have a driver’s license,” he said. “I stopped driving when I reached 99. Now I have a chauffeur. He takes me everywhere — to work, to restaurants, anywhere I want to go. Look outside. You can see him in the car waiting for me.”

It was true. He did have a chauffeur. I wondered what type of restaurants a 105-year-old frequented, so I asked him.

He told me that he went to only the best restaurants in New York. He had many favorite spots; French, Italian, Chinese, Greek. He was a gourmet. So was I. Over the years, we had many conversations about food. He said that he would like to take me to his favorite steakhouse. I accepted and that was the start of something wonderful. For years, we went to restaurants that he loved and that I loved. He was always known, and referred to respectfully as Mr. Rosenberg. He never let me pay.

“Put the knife down” he says, meaning that I should place the blade of the knife on that part of the salmon where I intend to cut it so that he can see the size of the slice. Now, I know the size he wants but I put the knife on the salmon at a place that, if cut there, will provide a slice much larger than I know he wants. That way he can say, “less, less.”

I slide the knife until I reach a point where the slice will be about one-inch wide. “Less, less,” he says.

I keep moving the knife until I arrive at the point where the slice will be about a half-inch wide.

Why didn’t I start the whole transaction with the half-inch slice since I already knew how much he wanted? Well, that’s the way we play the game.

“Four slices like that, “he says, “That’s enough for breakfast”

“How about some gravlax today?” I ask. (He buys gravlax every time he comes in.)

“Yes “he says. “Do you know how much I pay for ‘Graved-lox’ at Petrossian?” He accentuates the word “Graved-lox” to make sure I know he is familiar with the history of the product, that ages ago it was cured while being buried in the earth. “$76 a pound,” he says.

“So why do you buy it there?” I ask. “Ours is better and costs half the price.”

“Don’t worry Mr. Rosenberg; I’m going to cut it so thin that it will have only one side.”

His face is expressionless. Where is he, I wonder? I pack it all up and give it to him. “See you next week,” I say. He looks at me, says, “I hope so” and disappears into the crowd, perhaps into another world.

I learned a lot about Mr. Rosenberg over the many hours we spent dining together.

He came to this country from Europe in 1950 when he was 50 with his wife and baby in search of the American dream. He started at the bottom, working as a clerk in a delicatessen. One of his regular customers owned a zipper factory. The owner knew that Sol was a hard worker and offered him a job selling zippers on the side for a commission so he could earn extra money to support his family. He was so good at selling zippers that he gave up his deli job to sell zippers full time. He made contacts in the industry and by the end of his first year in America, opened his own small shop in lower Manhattan, making and assembling zippers. By early 1960 he had a booming business that employed over 100 people. He became known in the trade as “The Zipper King.” The business continued to grow through the end of the decade, and he was optimistic that the 70’s would bring greater growth.

Unfortunately, the 70’s brought cheap imported products to the U.S. By the middle of the decade he was forced to downsize and found himself getting deeper and deeper in debt until he was forced to close the business.

In 1990, at age 90 he started up a new zipper business, with only one or two employees, buying and selling to customers both new and old from his little loft space in New York’s garment district. He was still working every day as he approached his 108th birthday in March of 2008, when, on Valentine’s Day he died.

On the Friday, after his passing, someone showed up at Zabar’s, asked for me and told me Sol had passed away and that I was on the list of people to be personally informed of his death.

I miss him, especially when I go to one of the restaurants he liked.

Len Berk is the Forward’s lox columnist. He worked for 26 years behind the lox counter at Zabar’s.