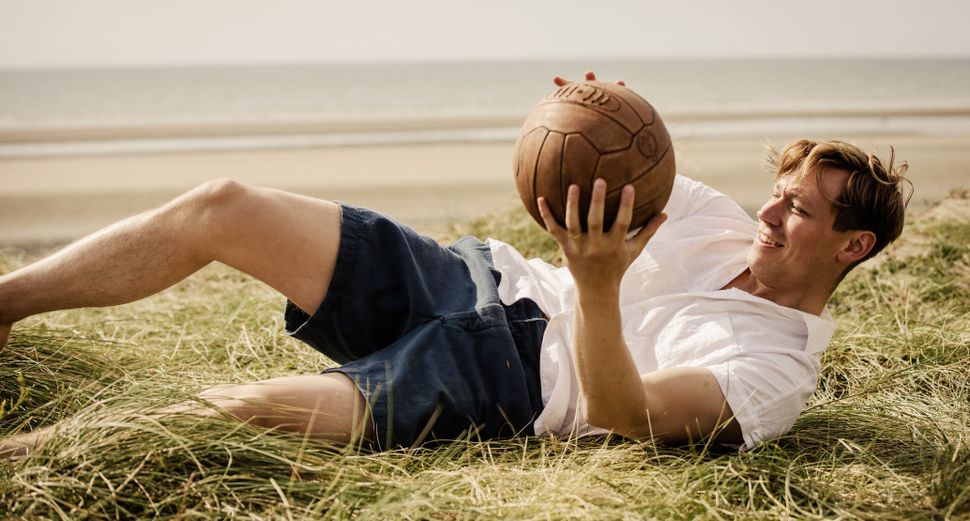 It seems almost inconceivable that there was a time when we could love our enemies and they would love us back. Marcus Rosenmüller’s “The Keeper” — part of this week’s Meyerson JCC Film Center offerings, with a screening and conversation the afternoon of August 11 — is a historical film that engages the possibility that there was such a moment. Even more unlikely: It occurred at the intersection of Nazism and soccer, via a post-War English football team now known best for riding high on oil money.

Perhaps, then, we can learn from how that rapprochement was achieved as the last millennium muddled to a close. Maybe times were simpler when the Abu Dhabi royal family’s focus was on oil and oases, and when the English Premier League was of only parochial British concern. But if we could connect across differences in a time when swastikas were symbols of genocide, not casual rebellion, perhaps we can do it again, now.

“The Keeper” is a romantic adaptation of a real life soccer story about the German goalkeeper Bert “Traut the Kraut” Trautmann, played by David Kross. Famous for playing in a cup final with a broken neck, the legendary goalkeeper overcame the fact that he was a captured Nazi prisoner of war to win an Englishwoman’s love, the 1956 FA Cup for Manchester City and, most difficult of all, the hearts of post-War British soccer fans.

The feat was all the more astonishing given Trautmann’s actual wartime actions. As the movie notes, he volunteered for the German army, joining the Luftwaffe, where he became a paratrooper and won an Iron Cross. And before that, according to “Trautmann’s Journey” by BBC journalist Catrine Clay, the young Bernhard Trautmann — he adopted “Bert” in the U.K. — volunteered for the Hitler Youth; he embraced its ideology and, as a brutal, blond-haired, blue-eyed athlete felt entirely at home in a racist “might makes right” atmosphere.

As her title suggests, Clay’s book traces the goalkeeper’s development from bigoted Hitlerite to a man of peace. He began his adult life as a German ethno-nationalist fighting the Allies and ended it with both the Order of the British Empire and the Order of Merit of the Federal Republic of Germany. Walking proof that the pre-frontal cortex isn’t finished until well into the 20s, Trautmann went from killing his perceived enemies and even beating weak Italian “allies” for fun and cigarettes, to someone who said his heart beat for both England and Germany.

“The Keeper” includes flashbacks to Trautmann’s wartime experiences, but traces his life as he begins his significant “journey” from capture to fame. Unlike the 2011 made-for-tv documentary “The Bert Trautmann Story” — which traces the full story of the only man to win an Iron Cross, an OBE and the English Footballer of the Year award — this 2019 SocuDrama, appearing in America for the first time, plays loosely with the historical record. But it saves all the crucial points of Trautmann’s biography to illustrate the general need for fairness and forgiveness.

It’s impossible to identify the crucial turning point of Trautmann’s life. Was it the moment when, after a series of unlikely escapes from French, Russian and American troops, he was finally captured by a British soldier? Was it at the prisoner-of-war camp near Wigan in Lancashire, when he was forced by the views of his fellow prisoners and captors, and the loss of the war, to reconsider his earlier actions and beliefs? Or was it the moment when he started playing as goalkeeper in soccer games at the camp and realised that he was quite good?

In “The Bert Trautmann Story,” Trautmann says that his “education began in the U.K. [because of] the way I was treated: fairness, kindness: tolerant.” No matter which telling of the story, the most significant act of fairness to Trautmann in the U.K. was, ironically, from a German: Rabbi Alexander Altmann. Indeed, all of the later bridge-building would have almost certainly been impossible without the bona fides granted to Trautmann by Altmann.

Manchester City supporters in general hated the idea of their team fielding an enemy. One wrote to the Manchester Evening News “We read with disgust that City may sign on a German footballer… City must be mad.” In that same edition, a “Jewish City Supporter” of 45 years who “served in the First World War, and was in the Civil Defence in the Second World War” spoke for thousands of Jewish fans when he wrote that “The Germans killed six million of my brothers and sisters… and if they sign this German goalkeeper I will organise a boycott.”

There was a real chance that the life Trautmann ended up building in English football would never have happened if Altmann, a German whose parents were killed in the Holocaust, had not vouched for him. Eventually a Brandeis professor in Jewish philosophy for nearly 20 years, Altmann served as a communal rabbi in Manchester from 1938 to 1959. What Altmann knew and how he decided to intervene are lost to history.

Tens of thousands of people marched in mass demonstrations outside the Manchester City stadium; threatening letters were written to the “Nazi;” both Manchester and opposition crowds chanted against him. Into the 1949 fracas, Altmann wrote:

“Each member of the Jewish community is entitled to his own opinion, but… Despite the terrible cruelties we suffered at the hands of the Germans, we should not try to punish an individual German who is unconnected with these crimes of hatred. If this footballer is a decent fellow, I would say there is no harm in it. Each must be judged on its merits.”

An alternative film, more Bergmanian than this one, might spend intense hours solely on the brooding of the rabbi and his thought process. Rosenmüller spends very little screen time on the rabbi’s thoughts, but enthusiastically agrees that his intercession was a pivotal moment in the story.

In an email to the Forward he wrote that “The letter of Rabbi Alexander Altmann is at the heart of my film.”

“Rabbi Altmann has a role model function: He judges people not according to their nationality but judges them according [to] their individual actions,” he added.

This British-German co-production embodies the same twin loyalties as Trautmann himself. Importantly, for a film that understands its role as helping bridge cultures, it’s not only the German who sees the errors of his ways. Harry Melling (most famous for playing Dudley Dursley in the “Harry Potter” films) plays the composite character of a traumatised and cruel English officer whose own sins are cathartically revisited. Overall, “The Keeper” is an example of how a light romantic film played on a backdrop of unspeakable horror can remain surprisingly satisfying.

Trautmann’s story of 545 appearances and 15 years of top flight soccer has faded in Britain and was never particularly well-known in Germany. That was part of the appeal of the story to Rosenmüller – to bring the lessons to a new generation and, effectively, a whole new country.

Trautmann’s story, he said, gave him an opportunity to trade in big themes: “In forgiveness, reconciliation, cowardice and courage, individual responsibility.”

“Once again the populists are celebrating their revival all over the world, also in Germany,” he wrote. “This is a good story about a brainwashed man who had the chance to realise that he was on the wrong path and changed his attitude and his life.”

The Marlene Meyerson JCC Manhattan Film Department is making the film available to rent at home from August 7-14 and hosting a Zoom Q&A with the filmmakers on Tuesday, August 11.