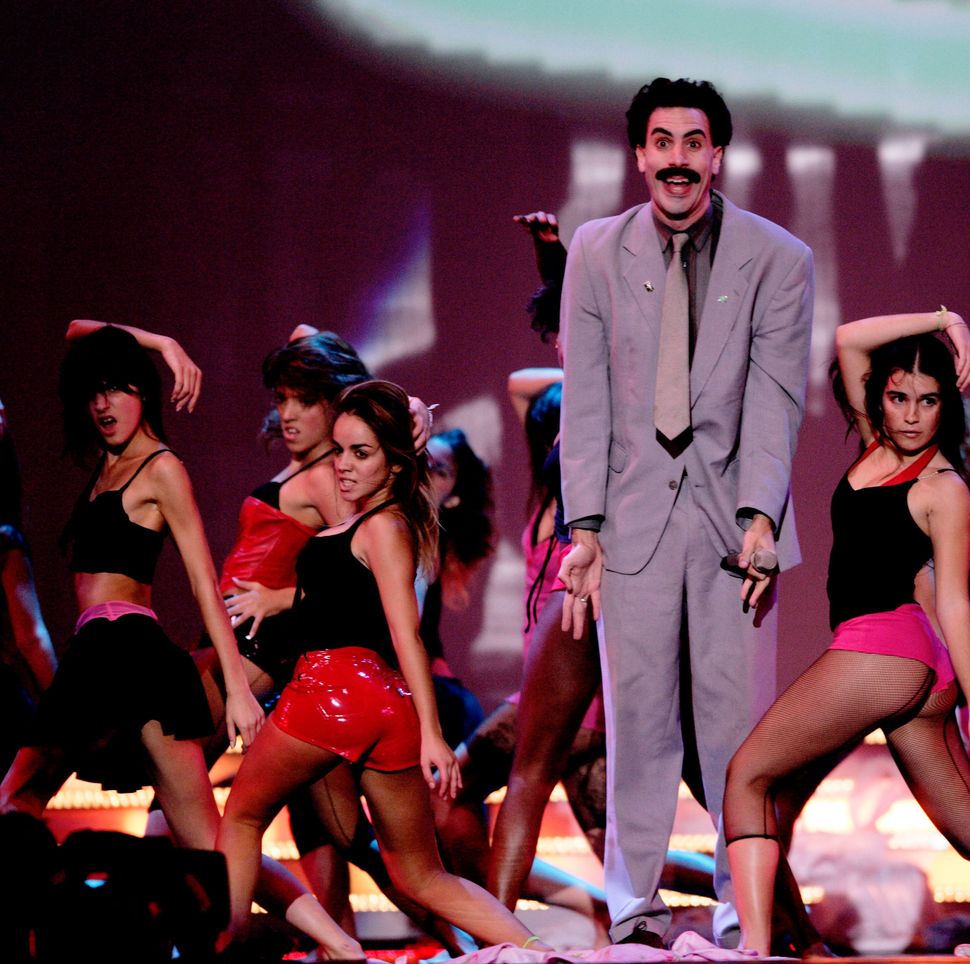 If you read that in the voice of the fictional Kazakh journalist Borat Sagdiyev, British comedian Sacha Baron Cohen’s most celebrated creation, you’re not alone.

While we last saw Borat nearly 15 years ago, his elongated reference to his spouse has clung to our brain’s language centers with the tenacity of Gorilla Glue. And just as there is no greater tonic for overcoming an earworm than listening to the song that’s plaguing you, the only hope of killing this joke may be a return of Borat with a new obnoxious catchphrase.

Luckily, we appear to be getting just that.

As Collider reported on September 8, “Borat 2,” a followup to “Borat: Cultural Learnings of America for Make Benefit Glorious Nation of Kazakhstan” (2006) has wrapped filming and has even been screened for a handful of folks in the film industry.

According to IndieWire, the film finds Borat convinced he is a movie star after the success of his big screen debut. Because of his new visibility, he has taken to assuming disguises as he meets and interviews subjects.

This meta turn might mean that Baron Cohen’s stunts this summer — the bikini-clad encounter with Rudy Giuliani, the song about infecting the Clintons with the “Wuhan Flu” — might not have been a part of his Showtime series “Who Is America?” but rather part of a new “Borat” adventure.

In retrospect, it’s clear that Baron Cohen’s gray-suited provocateur served as a canary in the coal mine when he pulled stunts like singing the fake Kazakh folk ballad “Throw the Jew Down the Well” in an Arizona dive bar. Through his journey into the heartland, he let us know about the strain of American culture that would not just excuse but endorse Donald Trump’s intolerance. Today, Borat’s blithe antisemitism and knack for exposing everyday people’s willingness to accept bigotry risks feeling overplayed. We’re already too familiar with the xenophobia he’s trying to expose, and as it’s sidestepped its way into government policy, it’s stopped being funny. Baron Cohen’s de Tocqueville-like critique of America is one whose insights, no longer shocking and revelatory, have become par for the late night circuit.

Still, Baron Cohen may surprise us by inventively diagnosing a threat to America that’s yet to fully metastasize. Given the comic’s strident warnings about hate speech on social media, we might expect that concern to permeate the new film. Perhaps Borat visits a Russian troll farm, or meets with a Twitter moderator to see just how much vetting surrounds a typical Trump tweet.

Whatever the outcome, we hope at the very least that Borat gives us a suitable replacement for “My wiiiife.”

Updated, September 29: We now know that the film’s full title, according to Collider, appears to be “Borat: Gift of Pornographic Monkey to Vice Premiere Mikhael Pence to Make Benefit Recently Diminished Nation of Kazakhstan.”

This information makes it even harder to predict what the film will be about, though we can glean that Kazakhstan is going through a rough patch and that Mike Pence is somehow at the center of Borat’s journey. Perhaps Borat is seeking Pence out, in much the same way he searched for Pamela Anderson in the original. As to what that pornographic monkey is, we can only say that it doesn’t sound like the sort of gift the vice president would care for.

We won’t need to wait too long for some clarity, as Deadline reports that the film is scheduled to debut on Amazon Prime sometime in late October, just before the November election. As the man himself would say, “very nice.”