Do the ‘Proud Boys’ know their anthem was written by a gay Jew? 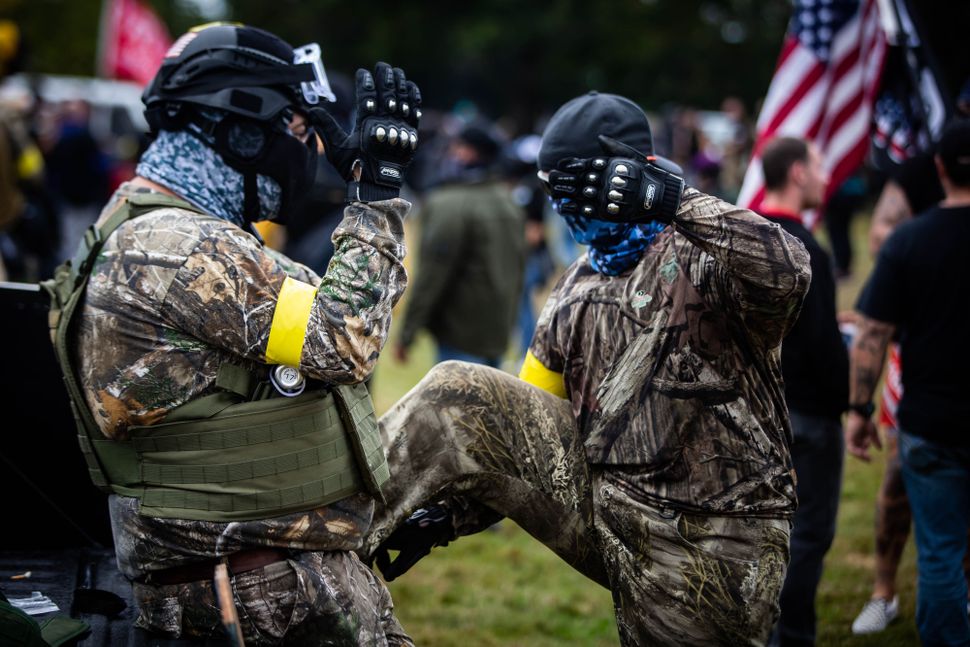 Perhaps the most curious fact about the Proud Boys, the violent far-right group President Trump appeared to call up to the reserves in the first 2020 presidential debate, is how they got their name.

The name can be read as an unapologetic affirmation of the things they stand for — which, according to the Southern Poverty Law Center, include so-called “western chauvinism” married to an anti-PC crusade mottled with anti-Muslim and baldly misogynistic rhetoric all dressed in Fred Perry polos. But “Proud Boys” is in fact an irreverent reference to a song that was cut from the 1992 Disney film “Aladdin.”

It all began in 2015 when the group’s founder, Gavin McInnes, heard the song, “Proud of Your Boy,” at his daughter’s school music recital (you can see him explaining this here, mocking the child singer based on his perceived lack of masculinity and for being raised by a single mom).

McInnes hated the treacly tune, placed back in the “Aladdin” songbook by the 2014 Broadway musical. In the song, the street rat promises his mother he’ll reform his bad behavior, which includes, but is not limited to, stealing and cavorting with a monkey in a fez. It’s a bad song, in my opinion, but McInnes referenced it regularly on his podcast as a token of a certain kind of feminized masculinity he sees being advanced by “PC culture.” McInnes said the showtune was all about Aladdin “apologizing for being a boy, when actually we should let boys be boys.”

For the Proud Boys, being a boy means an initiation that involves getting pummeled while saying the names of breakfast cereals, a Kelloggian avoidance of masturbation and a commitment to not apologizing for how white men behave. In its choice of name the group, which claims to not be racist or espouse white supremacy — while at the same time boasting an impressive number of white supremacist links and openly advocating for the safeguarding of white masculinity — is invoking a song written by the Jewish composer-lyricist team of Alan Menken and Howard Ashman, the latter of whom was gay. In fact, it’s their cheeky anthem. The irony is the point.

While it at first seems baffling that a group whose members spew homophobic slurs during attempted assaults and whose founder made a video called “10 Things I Hate About Jews” (before changing the title and claiming he is not antisemitic) would have the song as their namesake, it actually fits their whole hateful gimmick.

The Proud Boys represent an extreme version of trolling, and by using this song as their standard, they’re laughing at its sincerity. Apologists for toxic masculinity, they are co-opting something pure to fit a twisted world view where white men are beyond reproach and caring for other people’s feelings is an oppressive expectation.

Look, it’s not a good song, but it didn’t deserve this.

Do the ‘Proud Boys’ know their anthem was written by a gay Jew?