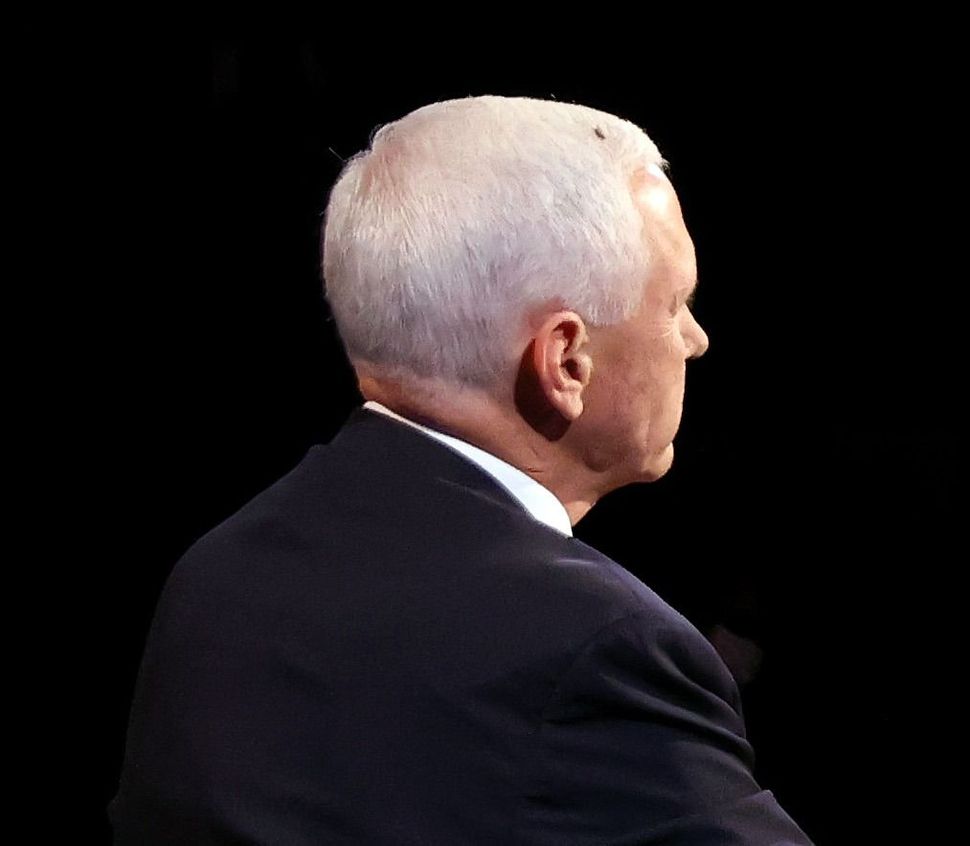 A fly that landed on Mike Pence’s head during the 2020 Vice Presidential Debate. Image by Getty/Justin Sullivan/Staff

Yesterday during the 2020 Vice Presidential Debate, a fly breached a plexiglass barrier amid a miasma of droplets and planted itself firmly on Vice President Mike Pence’s head for two full minutes as he nattered on about law enforcement. Surely you noticed, have seen the memes, the analysis and the instant Twitter account — but did you relate it to an instance in the Talmud?

While Pence trumpeted the president’s relocation of the U.S. Embassy to Jerusalem and tried to score points by mentioning Trump’s Jewish relatives, we couldn’t help but think of another second-in-command who suffered his own infamous brush with a winged insect.

The Talmud relates that the general Titus, the Emperor Vespasian’s heir, had less respect for Jerusalem than Pence does. He did some stuff there that would make the VP’s head explode.

After conquering the city, “the wicked Titus, who insulted and blasphemed God on High,” took a prostitute into the Temple, entered the Holy of Holies with her and used a Torah scroll for their duvet. The general also caused some property damage, rending the curtain partition between the Sanctuary and Holy of Holies with his sword, causing blood to spew forth from it. God made that bloodbath happen to wig our guy out. Instead, Titus thought he killed God and told everyone about it.

Anyway, on to the insect: Titus was on a boat one day when a wave “rose up against him and threatened to drown him.”

“It seems to me that their God, the God of Israel, has power only in water,” Titus said. “Pharaoh rose against them and He drowned him in water… Here too, He has risen up against me to drown me in water. If He is really mighty, let Him go up on dry land and there wage war against me.”

A Divine Voice responded by saying, essentially, “Okay, man. Ever heard of a gnat? Go on dry land and take that thing on if you think you’re so tough.”

Titus did. When he was there on terra firma, a gnat appeared and flew up his nostril and picked at his brain for seven years.

Pence, a committed Evangelical Christian would never knowingly blaspheme God — I mean, he’s been less than respectful to Jews in the past, like when he invited a Messianic Rabbi to pray for victims of the deadliest antisemitic act in American history — but he is, above anything, a man of faith.

But sometimes God uses his smallest creatures to send a message. He did it with locusts and, some say, He pulled a similar gnat-brain trick on Nimrod after he tried to build a tower tall enough to reach heaven. What might Hashem have against Pence? Well, perhaps he resents Pence for using his faith to excuse the Trump administration’s policy of separating children from their parents, for its exacerbation of a pandemic and for Pence’s own championing of conversion therapy.

And we should note, compared to Titus and Nimrod, this fly-on-the-hair thing is kids’ stuff — more of a warning than a punishment. When Titus finally died, they pried open his head and found the gnat was the size of a sparrow or a pigeon and had a copper mouth and iron claws. We think Pence can deal with a little bug (though that inflamed eye was more concerning.)

But back to the story: Titus was walking by a blacksmith’s shop one day when the sound of the hammering caused the gnat to stop buzzing and chewing. Titus told his people to recruit a blacksmith to hammer near him every day.

“He would give four dinars as payment to a gentile blacksmith,” the Talmud reports, “and to a Jew he would simply say: ‘It is enough for you that you see your enemy in so much pain.’”