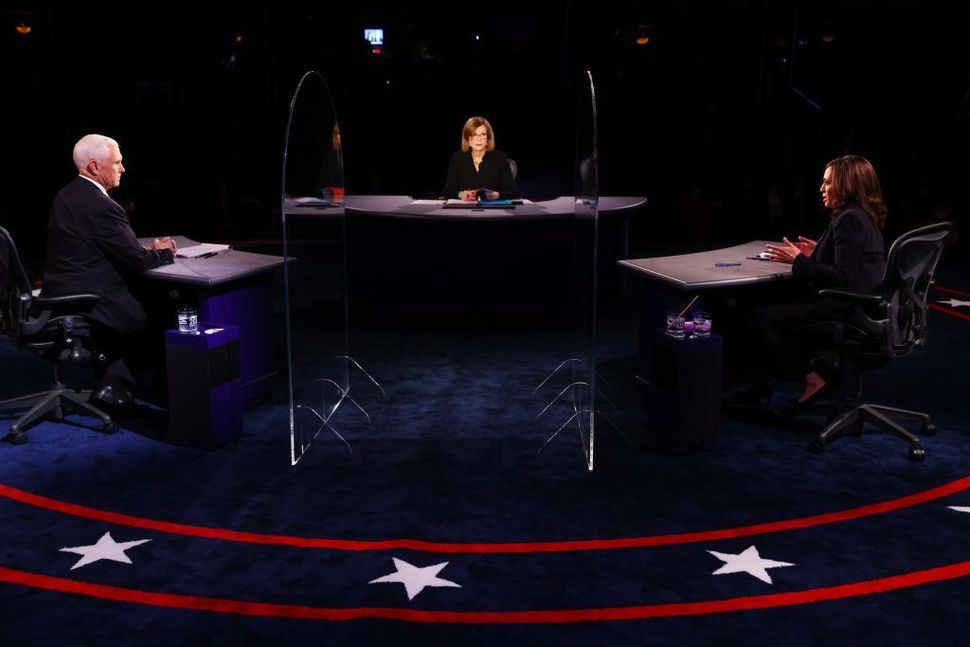 Asked about President Trump’s history of obfuscation when asked to decry white nationalists and white supremacists, Pence invoked the president’s Jewish grandchildren in his defense.

“Your concern that he doesn’t condemn neo-Nazis — President Trump has Jewish grandchildren,” Pence said. “His daughter and son-in-law are Jewish. This is a president who respects and cherishes all the American people.”

It was the most significant invocation of the Jewish political bloc in a debate that largely shied away from issues seen as specific to Jewish voters, including Israel. And while some saw the statement as a strong defense of Trump as accepting of diversity, for many, it struck a more jarring chord.

“Hi hello,” wrote journalist Laura Adkins. “Jewish grandchildren are not a shield to wield on whim against accusations of anti-Semitism.”

not everyone realizes this but if you have Jewish grandchildren you’re still allowed to denounce Nazis https://t.co/O0VSYbye5H

“He has Jewish grandchildren” is like “I have a black son” or “My wife is Asian.” It doesn’t prevent racism.

In 2017, after an assembly of white nationalists in Charlottesville chanted “Jews will not replace us,” Trump notoriously said he believed there were good people “on both sides.” Joe Biden has cited that rally, during which the protester Heather Heyer was killed by a self-avowed white supremacist, as one of his motivations to run for president. And during the first presidential debate on September 28, moderator Chris Wallace asked President Trump point-blank to condemn white supremacists. In response, Trump told the Proud Boys, a racist and antisemitic white supremacist group, to “stand back and stand by.” Members of the Proud Boys interpreted the comment as a tacit endorsement of the group; two days after the debate, after initially telling journalists he didn’t know who the Proud Boys were, Trump told Fox’s Sean Hannity that he condemned “all white supremacists.”

Harris cited President Trump’s refusal to condemn white supremacists at the first presidential debate and said the remarks were “part of a pattern” that included referring to Mexican immigrants as “rapists and criminals,” instituting a Muslim travel ban and insisting after the Charlottesville rally that there were “very fine people on both sides.”

Pence countered by accusing Harris of “selectively” editing Trump’s comments and arguing that the President has condemned white supremacists “repeatedly.”

Subjects covered at the debate included the ongoing COVID-19 pandemic, the future of the economy, the country’s tenuous relationship with China and the forthcoming confirmation hearings for Supreme Court nominee Amy Coney Barrett, whom Trump nominated to the court following the death of Ruth Bader Ginsburg. In a discussion of foreign policy, Pence cited Trump’s decision to relocate the U.S. embassy in Israel to Jerusalem as one of his notable successes.

On Iran, Harris said that Trump “pulled us out of the Iran nuclear deal and made us less safe.” Pence accused the “Obama-Biden administration” of sending billions of dollars to Iran — a claim rated false by independent fact checkers. When Pence repeatedly praised Trump with making the decision to assassinate Qasem Soleimani, an Iranian major general in the Islamic Revolutionary Guard Corps, Harris countered by asking Pence why Trump refused to confront Russian President Vladimir Putin on reports of Russian-funded bounties to the Taliban on U.S. soldiers.

The spectre of the pandemic loomed over the debate after Trump tested positive for COVID-19 and was hospitalized following his debate last week with Democratic presidential candidate Joe Biden. While neither Pence nor Harris wore masks, they were seated further apart than Trump and Biden had been, and plexiglass barriers were erected between them — although health experts decried the measure as inadequate.

Notably, the only person to appear on stage with a mask was Harris’ husband Doug Emhoff.