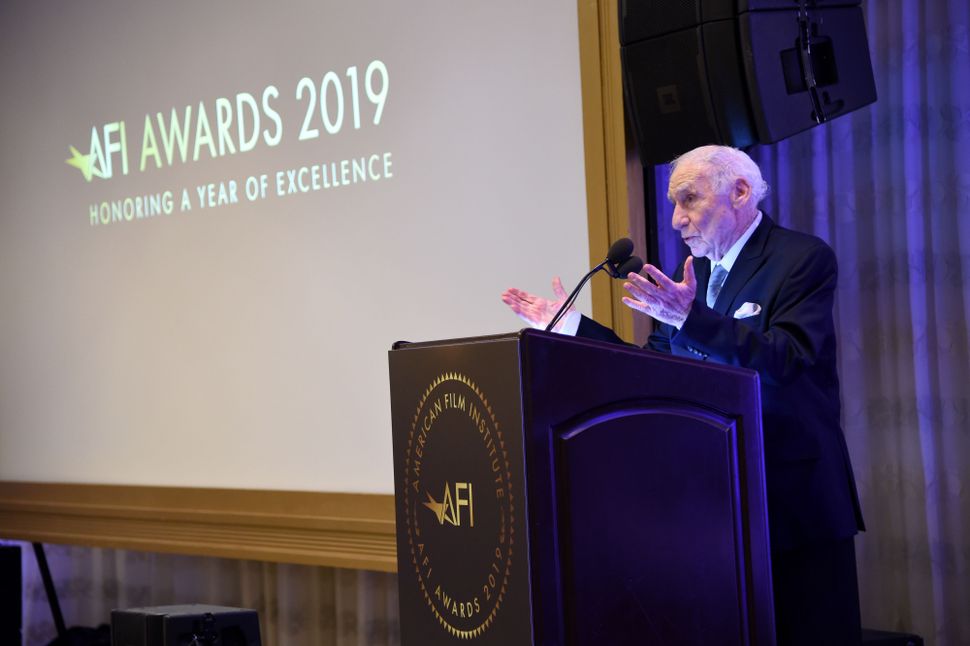 While Mel Brooks has dabbled in the local politics of a frontier town, enjoined theatergoers to join a Nazi kickline and famously proclaimed “It’s good to be king,” he’s never made a video endorsing a political candidate. Even at 94, there’s a first time for everything.

On October 21, Brooks’ son Max posted his father’s first ever political ad to Twitter. As in previous PSAs, Max is safely socially distant, separated from his father by a wall of glass where he and his son, Henry, are sporting matching, COVID-chic navy fabric masks.

My father, @MelBrooks, is 94. He has never made a political video. Until now. #MelBrooks4JoeBiden#BidenHarris#GrassrootsDemHQ pic.twitter.com/yQZhopSbNV

“Behind me you see my son and my grandson and they can’t be with me,” Brooks says in the 53- second clip. “Why? Because of this coronavirus. And Donald Trump’s not doing a damn thing about it.”

At this point, you can guess who Brooks is endorsing, even if you didn’t spot his “Cup of Joe” mug.

“So many people have died,” Brooks says, striking a rare sober chord, “And when you’re dead, you can’t do much! So I’m voting for Joe Biden. I like Joe because Joe likes facts, because Joe likes science. Joe will keep us going.”

Given the politically strident messages of Brooks’ late, great, friend Carl Reiner, it’s hardly a surprise that he supports Trump’s Democratic challenger. Knowing that Brooks’ contemporaries are reliable voters — and ones who tend to skew more conservative — this may be a successful appeal for team Biden aimed at those who, like Brooks, miss seeing their kids and grandkids up close. (Not for nothing, Florida Jewish voters are now favoring the former vice president.)

But we do take issue with Max Brooks’ claim that his father had “never made a political video.” He’s never made an endorsement video. You can’t watch “Blazing Saddles,” “The Producers” or “History of the World, Part I,” all of which were available on videocassette, and tell me they’re not astute political satire — if satire with a bunch of sex and fart jokes.

But we also shouldn’t overlook Brooks’ claim that Joe “will keep us going” in a time of pandemic. After all, the 2,000 Year Old man survived every plague known to medical science.