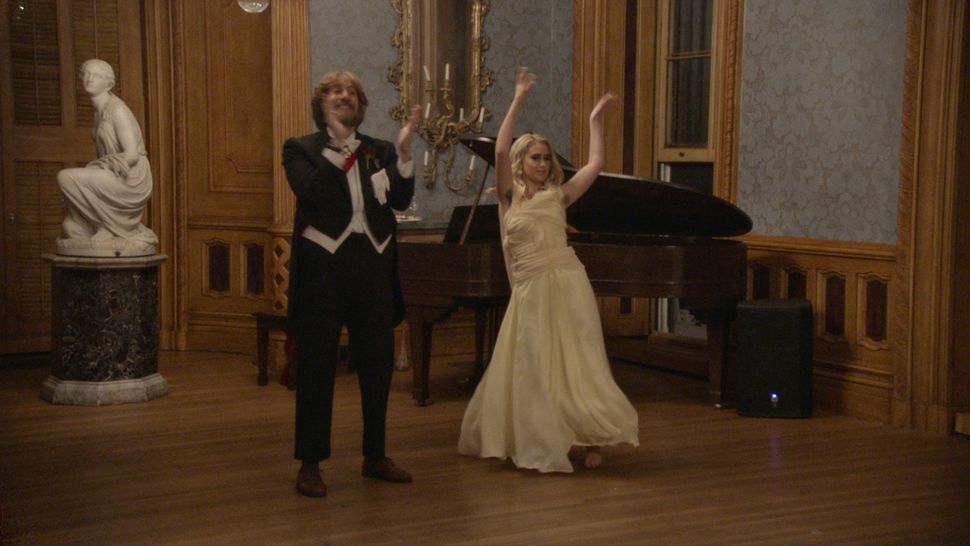 Sacha Baron Cohen as Borat and Maria Bakalova as Tutar in “Borat Subsequent Moviefilm.” Image by Courtesy of Amazon Studios

Growing up, Erran Baron Cohen and his younger brother, Sacha, would entertain their parents’ guests during Shabbos at their home in London.

“Me and Sacha were often quite bored actually,” Baron Cohen said. “We used to make up funny songs on the piano for our own amusement. One was called ‘Schvitzin”, which was about Jews wearing all their Hasidic clothes and sweating and eventually taking the clothes off and converting to Christianity.”

Soon the brothers were performing the tune in London clubs. They each got an early start in performing and, as adults, they still collaborate. Erran is a founding member, composer and trumpeter for the world music group Zohar and has written music for the Barcelona football club. Sacha became known as a comedian provocateur, the creator of “Da Ali G Show,” which introduced the world to a fish-out-of water journalist from Kazakhstan, Borat Sagdiyev. When that character made his film debut in 2006, Erran composed the music. 14 years later, both have returned to the character for “Borat Subsequent Moviefilm,” a sequel that was even more of a challenge than its daring predecessor.

“This movie was like the impossible movie to make, the sequel to ‘Borat,’” said Erran Baron Cohen, who also scored his brother’s films “The Dictator” and “The Brothers Grimsby” and his Showtime show “Who Is America.” “Would it even work? We didn’t know if he could get away with it and secondly there’s the pandemic and everything got shut down and then we all had to work remotely.”

Nevertheless, the film was completed; Erran Baron Cohen even traveled to Vienna to record with an authentic “Gypsy” band, while Borat was quizzing a farm equipment store employee about how many propane canisters it takes to effectively gas a vanful of Romani people.

The elder Baron Cohen’s task, in the face of this absurdity, is to play it straight, scoring a scene where Borat thinks he’ll be devoured by Jews at a synagogue like a horror film and framing the love story between Borat and his daughter in a touching orchestral mode. With many playing the new soundtrack on repeat, we could call it, after the fashion of Borat, a “great success.”

I reached out to Baron Cohen, who spoke to me from his home in London, about his interest in world music, working with his brother and how he ended up composing music for an orchestra in Kazakhstan. The following conversation has been edited for length and clarity.

PJ Grisar: You and your brother are both musicians — was it a musical family? 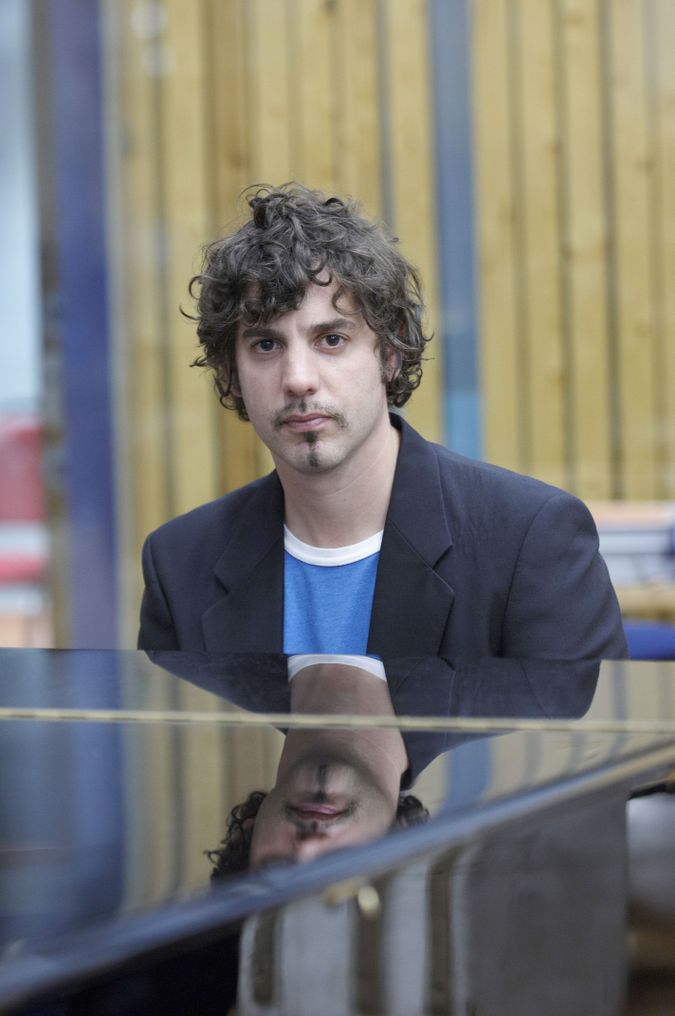 Erran Baron Cohen: We all grew up playing instruments. Sacha plays cello. I play trumpet and piano and have an older brother who played clarinet. I’m the only one who carried on, really.

Over the summer we saw one musical performance from your brother. It was interesting seeing that and wondering what he was up to and how it would all come together.

That’s how I feel as well.

Does he keep you in the dark about a lot of what he’s doing?

The process evolves as it goes. Under lockdown it was changing, which it always does. It’s a constantly changing film, almost, so it makes it hard to know what you’re doing sometimes. There’s a feeling of uneasiness, I would say, and you hope that it works out in the end — which I think it did.

How did you develop a sound for “Borat” – did you do a lot of studying up on the region’s music?

The sound is actually Eastern European — Gypsy stuff, rather than Kazakhstani stuff. There’s nothing Kazakhstani in this film at all. The first movie was more violin — we had cymbals and accordion. We had quite a small main band, but for this one we actually had two Gypsy bands for the orchestral score. One was this big brass band with three trumpets and two tubas and euphoniums and trumpets. We also had more emotional Gypsy stuff, which was clarinet, accordion, double bass and acoustic guitar, which is playing a lot of the main father-daughter theme. The music really tries to amplify that arc of the story where he finds his daughter and ends up falling in love with her — as a father.

The irony — Borat hates “Gypsies” and this music is Gypsy music.

Yeah, and he hates Jews and he speaks Hebrew.

You are also a member of Zohar, which blends Arabic, electronic and cantorial music. Has world music always been what you’ve been drawn to?

Living in London there was such a cultural mix, and we had great radio shows. There was this great show with a DJ called Charlie Gillet, he was quite a legend, and he did this world music stuff. That opened my eyes to the whole ethnic thing, and I always loved trying to combine these two things together to make them different but try to keep the essence. For me, the soul music which you hear in Aretha Franklin and the great soul singers, you hear that in the great world singers. I was always interested in that and Zohar took that idea with Jewish, Arabic, Middle Eastern music, which is my heritage. I went to Israel and heard that music with an electronic sound, which was interesting, because I loved Kraftwerk.

Why did you go more the Eastern European route with “Borat?” Why not do Kazakh music?

It’s not filmed in Kazakhstan, it’s filmed in Eastern Europe, so that’s where we took the music from. It fitted the picture. I actually worked with the Kazakhstani Philharmonic Orchestra afterwards, so then I had to immerse myself in Kazakhstani music — it doesn’t sound at all like this stuff.

How did you end up with the Philharmonic? I know that not all Kazakhs are not all pleased with the film, so that surprised me. I’m not sure why your brother picked that country, actually.

No one had ever really heard of Kazakhstan. It was kind of random. The film’s not about Kazakhstan; it’s about America, it’s about prejudice, and politics, particularly, in this one. After the first “Borat” this guy Marat Bisengaliev, a Russian-trained violin virtuoso who runs this orchestra Turan Alem, approached me and I wasn’t sure if it was a joke in the beginning, but he met with me and said “I’d love to work with you.” I jumped at the chance — being able to write for a symphony orchestra is something you don’t get asked to do often.

Who were the performers on the score? There’s a female vocalist who’s quite impressive.

Diyana Vasileva, Diyana the Mountain Girl, who’s actually from Bulgaria. I also worked with Aleksey Igudesman, who’s an amazing violin player. I’d done a “Borat Suite” for him, which he’d played. He was playing violin and then we had a bunch of great musicians that were part of the Gypsy band from Vienna. In Vienna we got the whole Gypsy element. We try to keep things very authentic. There was a nice sachertorte also, which is a cake you could eat occasionally. That was a bonus.

No. Actually it’s interesting. There’s a very dark history obviously. It was an amazing Jewish cultural community that then actually got wiped out. I went to Leopoldstadt one evening, which was the Jewish area. A lot of students live there but also a lot of Hasidic guys walking around. It’s a growing Jewish community. It was just before Yom Kippur this year that I was recording out there and my rabbi from London called. Because we were under lockdown and not going to synagogue he was ringing everybody personally. I picked it up and told him I was in Leopoldstadt. He had lots of conflicting feelings.

You’ve done most of your brother’s comedies and also some thrillers and dramas and even a documentary on the Arab-Israeli conflict. Is comedy a kind of return to your comfort zone — given you and your brothers’ early days writing goof songs?

From a musical standpoint, the music always has to sound straight and authentic, as if what was happening to him was real. Musically you’re writing as if you’re writing a sort of serious piece. Any jokey bits would probably be wrong and ruin the whole thing. Doing comedy you have to actually tread carefully. If you set in too long or too short it can affect the joke. You have that with horror music as well with the whole buildup. You have to be quite eclectic because each scene is a different story.