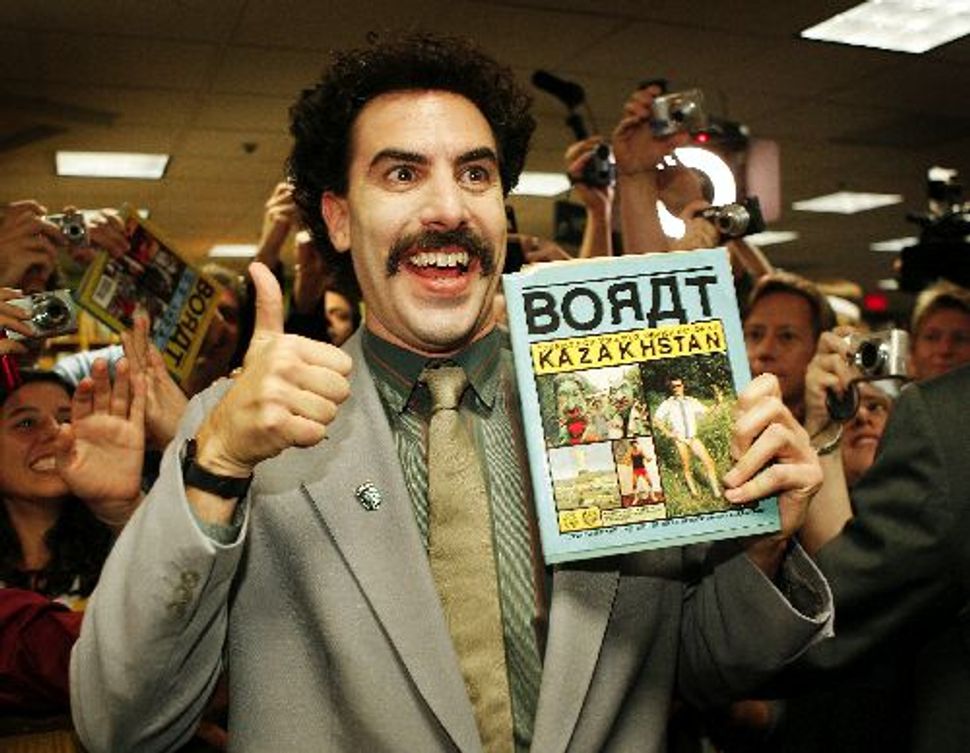 But four years after the massively successful release of Sacha Baron Cohen’s offbeat comedy, a Kazakhstani filmmaker wants to set the record straight. The French news agency Agence France-Presse reported August 7 that Kazakh director Erkin Rakishev will soon start shooting “My Brother, Borat,” an unauthorized sequel to Baron Cohen’s mockumentary. Rakishev, according to AFP, told the Kazakh tabloid Kazakhstanskaya Pravda that “we want to ride on the wave of success of ‘Borat,’ to take advantage of this popular image in the West to show people the real Kazakhstan, not Baron Cohen’s Kazakhstan.”

And while officials in Kazakhstan remained mum about Rakishev’s project, it’s hard to imagine that they’re not cheering him on in private. “The Government of Kazakhstan did not officially rebut any part of the ‘Borat’ movie, as it is a clear work of fiction that has no relation to the real Kazakhstan and was not even filmed there,” Zhanbolat Ussenov, press secretary of the Embassy of the Republic of Kazakhstan, in Washington, told the Forward. “As for Mr. Rakishev’s reported plans to make ‘My Brother, Borat,’ to my knowledge it is a fully private project, not supported by the government.”

Kazakhstan, in fact, has been working to promote itself as an “ethnically diverse republic” with a dynamic market economy, according to the embassy’s website. And Baron Cohen’s acerbic enactments of comically corrosive anti-Semitism are, Ussenov insisted, also fictitious. “The Jewish population of Kazakhstan is indeed quite vibrant,” he wrote in an e-mail to the Forward. “Our country has been leading by example in fighting anti-Semitism, as well as ethnic and religious intolerance of any kind.”

Baron Cohen, meanwhile, is laughing all the way to the bank, as they say. The London tabloid Mail on Sunday reported on July 31 that he and his wife, actress Isla Fisher, just closed on a “palatial” $18 million Hollywood home.