On Joe Biden’s 78th birthday, what his favorite film says about his views on antisemitism, Torah and more 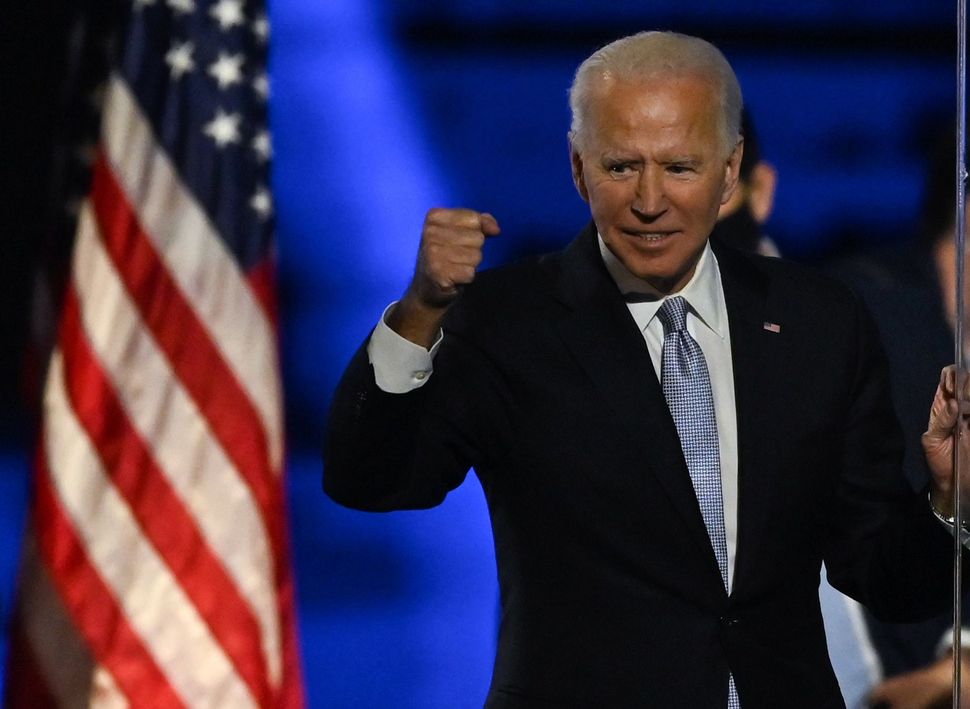 Joe Biden on November 7, 2020, the day he was projected as president-elect Image by Getty/JIM WATSON/Contributor

After all, he’s having to put in extra hustle as his reality-blind predecessor tries his damnedest to block his transition. There are national security briefings to wrangle from a closed-off outgoing staff. There are pandemic preparations to make while Trump plans in-person White House events as schools and museums shutter and the COVID death toll climbs past a quarter of a million. With all this tumult, we hope that Biden will still take some time on this special day to unwind with his podded-up extended family by enjoying some ice cream and — maybe — taking in his favorite film, “Chariots of Fire.”

Way back in 2008, when he was Barack Obama’s running mate, Biden told Katie Couric that the 1982 Best Picture winner about Olympic runners, fervent faith and religious discrimination has a special place in his heart.

“The truth of the matter is the thing about it, there is a place where someone put personal fame and glory behind principles,” Biden said, explaining his love of the perfectly passable sports movie. “That to me, is the mark of real heroism, when someone would do that.”

A person’s favorite film can tell you a lot about them (case in point, Trump purportedly favors “Citizen Kane” and thought its title character should “get a different woman”). Here’s what Biden’s taste in cinema says about him.

1. He cares about antisemitism on college campuses

One of the film’s protagonists, Harold Abrahams (Ben Cross), encounters religious bigotry as a student at Cambridge, both from students and faculty. Facing this intolerance, he describes running as “a weapon… against being Jewish.”

Interestingly, Abrahams avoids a typical Jewish sportsman’s stigma, competing on Shabbat where his devout Evangelical foil, Eric Liddell (Ian Charleson) refuses to run on Sundays. Citing his own need to run, Liddell says, in terms I will never forget as long as I live, “When I run, I feel His pleasure.”

Biden ran as an everyman. Try as the Trump campaign might to paint him as an elitist, it just doesn’t wash. It makes total sense that Biden as a man of faith would have an affinity for this movie. But, beyond that, it really just goes to show that Biden likes standard, meat and potatoes-type stuff with some depth, but not a whole lot that challenges you. We’re lucky no one asked him this question this recent cycle — the answer might well have been “Green Book.”

3. He’s a fan of synthesizers

Even if you’ve never seen “Chariots of Fire,” you almost definitely know its endlessly parodied main theme by Vangelis. Listen to this and imagine Joe in a Wilmington cineplex in 1981. You can hear him turn to Jill and say, “Whoa, that’s really powerful stuff — I really mean it!”

Beyond the performances, the Oscar-winning screenplay, by Colin Welland, and the message of sticking to your convictions — or finding personal salvation in sport — Biden probably really dug the scenes of the men running on the beach at a slow tempo. At that time, it was something of a novelty, and it’s not hard to imagine that it totally flipped our guy’s lid the same way bullet time would about 19 years later in “The Matrix.”

5. He may have watched it before he declared victory

When Biden, after a long slog toward a projected win, appeared onstage in Wilmington on Nov. 7, he ended his speech by paraphrasing some verse, saying ,“Now, together — on eagle’s wings — we embark on the work that God and history have called upon us to do.” That’s adapted from Isaiah. The “eagle’s wings” thing is big, and even gave its title to one of those Moses bildungsromans that were big in the mid-20th century.

Re-watching “Chariots,” the phrase rings a bell for a different reason. In a sermon at a Scottish church in Paris, Liddell concludes by quoting that same verse, intercut with scenes of Abrahams losing a race before his big comeback: “But they that wait upon the Lord shall renew their strength; they shall mount up with wings as eagles; they shall run, and not be weary; and they shall walk, and not faint.”

Either Biden really likes this bit of Scripture, or he was taking some inspiration from his favorite movie in the moment before its overdue, climactic victory. Maybe this was what Trump meant when he accused him of plagiarism. But then, maybe the dude who says “Two Corinthians” shouldn’t cast the first stone.

Correction November 20,2020, 8:45 AM: An earlier version of this article incorrectly stated that Eric Liddell was Catholic. He was in fact an Evangelical Protestant. We regret the error.

On Joe Biden’s 78th birthday, what his favorite film says about his views on antisemitism, Torah and more