‘Pieces of a Woman’ sorts through remnants of a Holocaust legacy 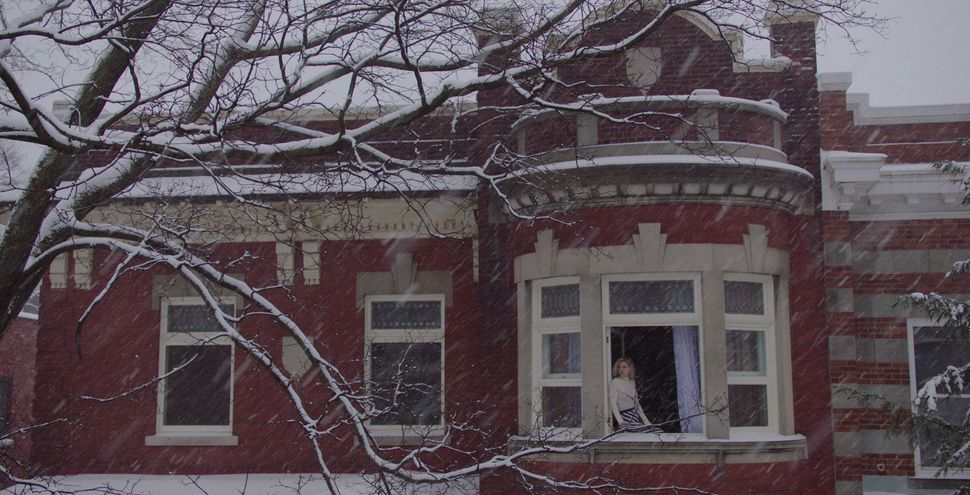 Vanessa Kirby in “Pieces of a Woman.” Courtesy of Getty/Benjamin Loeb/Netflix

“Pieces of a Woman” is a ghost story.

Following an agonizing birth scene, where the baby doesn’t make it, remnants of the child’s life — or reminders of her absence — survive. The mother, Martha, wears postpartum diapers to the office and cools her sore breasts at home with frozen peas. Framed sonograms hang on the wall of a would-be nursery. A new minivan ferries her and her partner, Sean, around bitter winter Boston. As the couple grow to resent each other’s expressions of grief, Martha’s mother, Elizabeth, launches a legal crusade against the delivering midwife for damages. Enter another ghost from another tragedy.

The film, which debuts on Netflix Jan. 7, is informed by screenwriter Kata Wéber and director Kornél Mundruczó’s own loss of a child and based on a play they debuted in Warsaw. For Wéber, who’s married to Mundruczó and whose mother survived the Holocaust, loss is a family legacy.

The miracle of the film is that in so many subtle touches, it levels a survivor mentality that prizes overcoming and historical reckoning above a healthy engagement with trauma. “Pieces of a Woman” doesn’t forsake memory, but questions its proper place in the lives of the second generation.

Before Martha, played by Vanessa Kirby with a veneer of eerie calm, coolly donates the baby’s body to science, her mother confronts her.

“Do you really want to put your baby’s body in a mass grave like an animal?”

The line, delivered by Ellen Burstyn as the domineering and elitist Elizabeth, means more later.

In a pivotal scene, Elizabeth presses Martha to appear at the trial of her midwife, to confront the loss, “speak her truth” and secure what she sees as justice. To drive the point home and ratchet up her guilt, she takes a dig at Martha’s choice to have a home birth. She then plays a trump card, describing how after her own father went to the ghetto, her mother birthed her alone in a shack, hid her under floorboards as an infant and fed her just enough milk to stay alive — but not enough to cry and be discovered. A doctor who examined her later was ready to give up on saving her, but for the objections of Martha’s grandmother.

“When she absolutely insisted he picked me up by my feet and held me up like a chicken and said, ‘If she tries to lift her head, then there’s hope,’” Elizabeth tells Martha, “I lifted my head. That’s what I’m asking you to do now.”

Arriving well into the second act, the monologue is as close to an exposition dump as the spartan script comes. It’s artfully overwrought and vague on details. It also breaks the story open, revealing the stifling expectations and intergenerational trauma that animates Martha’s detached form of coping. Coming from a background of defiant survival, Martha has no other model for mourning or motherhood, only stories like this.

While Martha has likely heard her mother’s story in the past, before Elizabeth presents it we mostly learn the family is Jewish through visual clues — Hebrew on a gravestone; a mezuzah or menorah in the distance. Rarely does a film with such heavy subject matter have so light a touch, a feat all the more remarkable given that it is Wéber and Mundruczó’s first English language film.

In the end, on her own terms, Martha proves herself as Elizabeth’s child. She lifts her head in an affirmation of family strength and a rejection of what haunts it. She survives her own tragedy and the ones she inherited. What happens next is transcendent.

After two hours of suffocating close angles and 360-degree tracking shots, the camera finds distance. Branches of an apple tree obstruct our view of Martha beginning a new chapter. We can only catch glimpses of what her life becomes.

Having achieved a measure of peace, she took her future for herself. The past has no right to it.

‘Pieces of a Woman’ sorts through remnants of a Holocaust legacy