Did antisemitism forge the bagel we know and love? 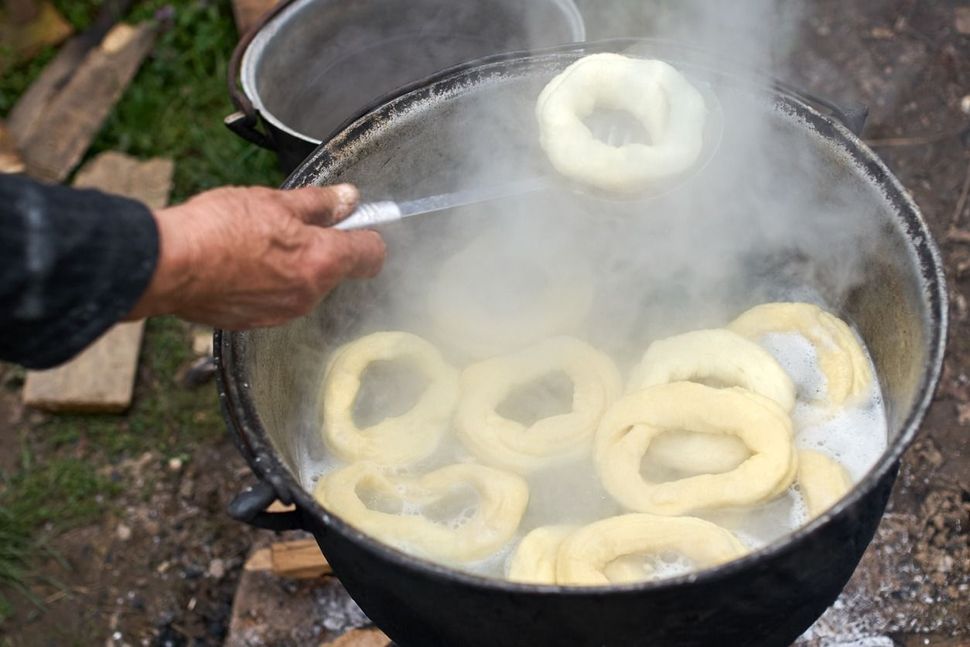 Bagels being boiled By iStock

For a humble circle of bread, the bagel is divisive. Even that statement would probably set someone off on a rant (bagels are not just circular bread!). People could go to war over whether gimmicky styles like chocolate chip or rainbow bagels are delicious or disgraceful. But everyone agrees that boiling the bagel, which creates the distinctive crust, is the defining trait, what makes a bagel a bagel.

Recipes will often explain that boiling makes the glutens create a crust. But apparently, the boiling technique may actually have its origins in an antisemitic law that forbade Jews from baking.

In Maria Balinska’s 2009 book, “The Bagel: the Surprising History of a Modest Bread,” she speculates that the boiled, New York-style bagel arose In Poland. There, Jews were banned from baking bread.

The rationale for the ban is hazy, but may have been to prevent Jews from tainting the holy sacrament of communion, which, just to be safe, prevented Jews from buying, selling and touching bread. This persisted until 1264, when the Polish Prince Boleslaw the Pious said that, “Jews may freely buy and sell and touch bread like Christians.” Very generous, Prince Boleslaw.

This governmental ban, however, was replaced by a religious one just a few years later, in 1267, when a group of Polish bishops decreed that Christians shouldn’t be allowed to buy bread from Jews. Their reasoning may have come from the general hatred and suspicion of Jews that dominated Europe for, well, most of history, which, Balinska hypothesizes, caused them to believe Jews had likely poisoned bread sold to Christians. Or perhaps it was even connected to the blood libel conspiracy that Jews took Christian blood for unleavened bread on Passover. (This latter is my own theory, but it seems logical that suspicion of unleavened bread would translate to a similar suspicion of leavened bread.)

Somewhere during these bans, the theory goes, Polish Jews took up boiling their bread either to assure Christians that any poison would have been washed off or neutralized, or to cook them when they weren’t allowed to have access to ovens.

Without boiling, the bagels would have been nothing special, similar to another circular bread traditional in Poland, the obwarzanek. But the boiling innovation, necessary to circumvent Polish antisemitism, created something so delicious that it would catapult poor Jewish immigrants in America to, if not riches, at least a comfortable middle class existence of houses on Long Island and nice cars.

When bagels came to New York, making them was arduous and awful; they were kneaded by hand and baked in enormous ovens during the wee hours. But the workers organized and developed a powerful bagel union, the Beigel Workers Local 338, which picketed often and fought for good wages.

Bagels became so popular that people were willing to do anything for them, and so the union got its way. The union members “were all Jewish men who went from being working class, not having any money, in terrible conditions, to, through the power of their union, being middle class,” said Jacob Remes, a professor of history at the Gallatin School at NYU. The union workers, an exclusively Jewish bunch, guarded their knowledge carefully; even the mob bowed to their power.

Eventually, a bagel-making machine was invented by Daniel Thompson (you’ve seen his bagged bagels in grocery stores today), and the power of the bagel union, and of bagels themselves faded. The machine-made bagels were frozen and distributed widely, corrupting the very name of the bagel with their soft crust and mushy insides; a critic quoted in Balinska’s bagel history complained of “a public too lazy to chew.”

Remes opines that we have lost the bagel in modern times, and no one has had a true New York bagel since 1967. “What made a New York bagel was that it was made by hand by these old Jewish men who had passed their traditions down from father to son.” With the lore now lost, today’s bagels can never achieve the same power as the union bagels.

But the legacy of the bagel as a symbol of Jewish innovation has endured.

Mira Fox is a fellow at the Forward. You can contact her at [email protected] or find her on Twitter @miraefox.

Did antisemitism forge the bagel we know and love?