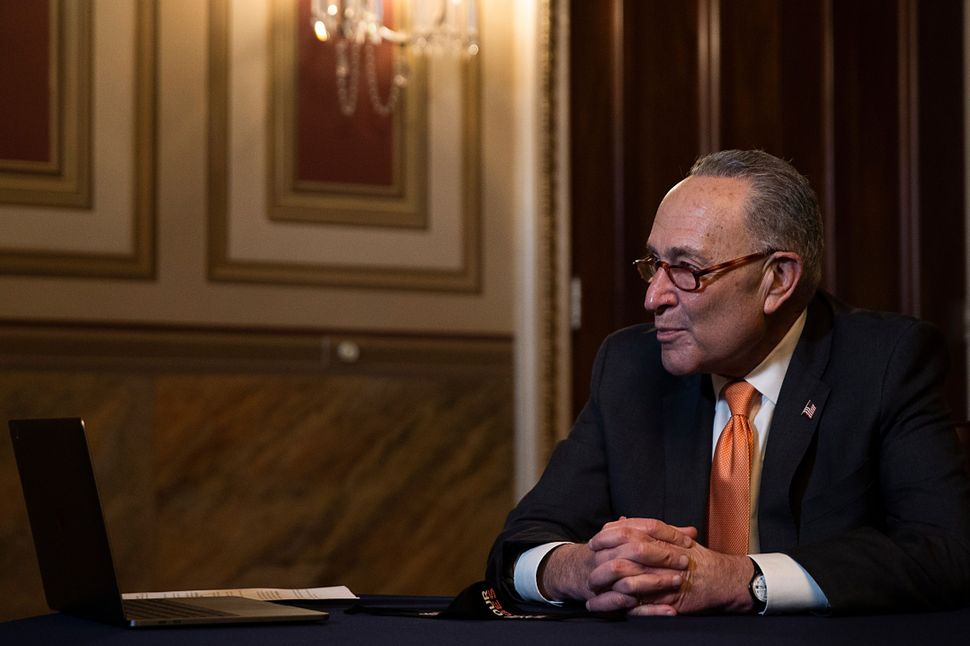 Chuck Schumer has been the Senate majority leader for less than a week and already his oratory has risen to our attention.

Taking to the Senate floor on Jan. 22, Schumer pushed for the prosecution of ex-President Trump, saying “There will be a trial, and when the trial ends, Senators will have to decide if they believe Donald John Trump incited the erection.”

Realizing his boner immediately, Schumer took care to correct himself. He meant “insurrection.”

I regret to inform you that Chuck Schumer just said ‘erection’ instead of ‘insurrection’ on the Senate floor pic.twitter.com/U5xRRnkaQg

It was a hard start to his tenure as the country’s top Jewish politician, but then Schumer has never been known for his flawless speechifying.

This reporter has seen him recount his boring breakup story at numerous commencements ceremonies for New York schools — followed, of course, by a less than rousing recitation of Rudyard Kipling’s “If.”

Part of Schumer’s charm, surely, is that he is given to gaffes and unpolished presentation — if a bit more put together than Bernie Sanders in his Burlington mittens.

Our editor-in-chief once saw him at a high holidays service in Park Slope with his kippah inside out (it was a nylon number of the kind you take at the bin on your way in). He has cultivated something of a reputation as a lovable shlub, proudly living in sub-dormitory-level housing on the Hill with other senior lawmakers.

Schumer’s latest flub feels of a piece with his Senate origin story. In his first run in 1998, his Republican opponent called him a “putzhead.” Why he didn’t go with the obvious Yiddish anatomical rhyme for Chuck beats me, but Schumer rode that controversial moniker to victory.

With the “erection” slip, the tradition of below-the-belt misfires continues. We’re sure his cousin Amy — the mind behind comedy like this — is kvelling.