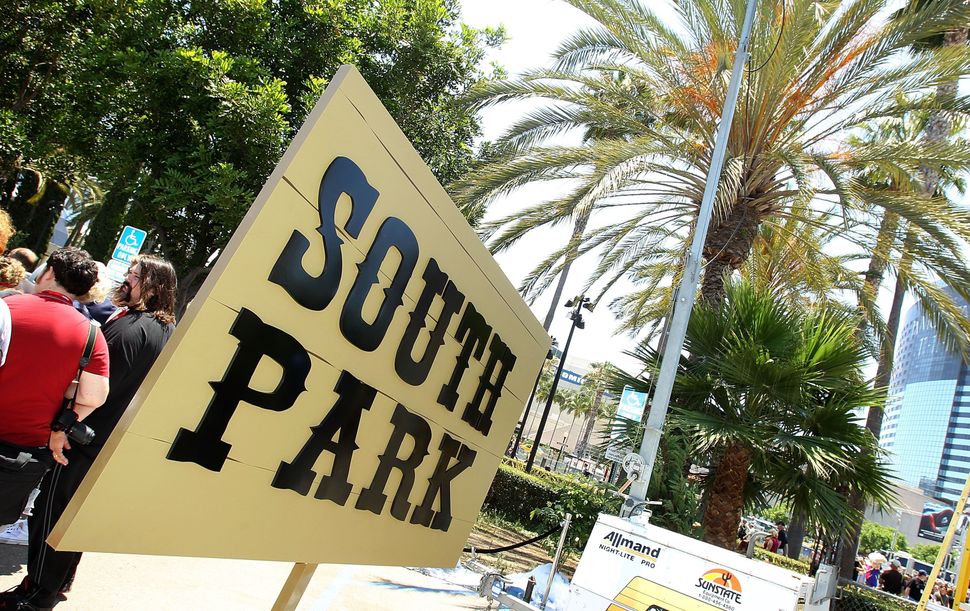 There’s a lot going on in the new “South Park” special, but only a few seconds that seem to matter to Benjamin Netanyahu.

On Thursday, the prime minister tweeted a clip from the episode that showed a passenger plane decked out with Magen Davids appearing in a burst of spangly sky diamonds.

“It’s Air Israel with enough vaccines for every adult in town!” cries Mr. Garrison, the longtime teacher who, for the past few seasons, has served as the show’s surrogate for President Trump. Underscored by vaguely Middle Eastern music, an Israeli man hucks boxes of the vaccine from the cabin door, providing the town with ample doses. A true Deus Ex Maccabee (sorry).

“Even in South Park they already know – in Israel they are coming back to life,” Netanyahu tweeted approvingly.

Yet his clip is edited to drop a few frames of Garrison standing near a QAnon supporter named Mr. White, who was transformed into a giant penis. It also cut out Garrison’s preface to the plane’s miraculous arrival: “I’ve worked out a deal with some pretty powerful people.”

Warning: We’re about to get into spoiler territory.

Primarily, this “powerful people” remark is a sardonic wink to the status of “South Park” creators Trey Parker and Matt Stone. The pair identify as members of the “Hollywood elite” that QAnon supporters are railing against throughout the episode — that group’s theology, which includes Jeffrey Epstein, is explained in a graphic sequence akin to the Scientology and Book of Mormon explainers the series is famous for.

In a meta turn, Parker and Stone reveal themselves as part of this cabal by manipulating Mr. White’s animation when he threatens to expose them, hence his penile appearance later. They’re not exactly subtle elsewhere, pinning an image of themselves to a bulletin board of other power players in the QAnon meeting place. At the end of the episode, Garrison, having managed the vaccine delivery with an unseen force controlling events, says “Nice doing business you, you little child-murdering pedophiles,” right before we cut to the start of the credits, naming Parker and Stone as executive producers and, presumably, the pedophiles to whom he is referring.

The suggestion is that the Hollywood elite pedophiles (who themselves are a revamped version of Jews in blood libel myths) have special ties to Israel.

It’s clearly satire. Stone and Parker, while allowing some sympathy for QAnon believers, obviously don’t think much of their beliefs (and for what it’s worth, Stone’s Jewish). But Israeli politicians’ reaction to this riff on their vaccine success, and their response to another recent one, says a lot about what they’re willing to find offensive.

On Twitter, Israel’s ambassador to the U.S., Gilad Erdan, also shared a scene from the special. In it, a crowd of people are lined up outside a Walgreens, which has been reimagined as an exclusive club for the elderly, complete with house music and a bouncer. One man waiting to get in pesters the guy at the gate, saying “You know, in Israel they vaccinate everybody. Israel’s way cooler than this lame place.” (He later says he tried to get into Israel but couldn’t. Travel restrictions, surely, but for whom?)

Erdan tagged NBC in his tweet, saying “this is how you do pandemic humor when it comes to Israel.”

Hey @nbcsnl: this is how you do pandemic humor when it comes to Israel. Watch and learn from @SouthPark pic.twitter.com/miMAS0dwry

He was clearly referencing a Weekend Update joke on “SNL” which drew the ire of Jewish groups for implying that Israel wasn’t vaccinating non-Jews. “South Park” is famous for responding quickly to headlines, as shown in the documentary “6 Days to Air.” It’s been well over six days since the Michael Che debacle, so creators Matt Stone and Trey Parker likely took that joke’s poor reception into account.

But how exactly is Che’s misfired punchline — that many received as a poorly executed but valid critique of Israel’s controversial, if complicated, approach to vaccine distribution in the occupied West Bank and Gaza Strip — worse than implying that Israel is a stakeholder in Epstein’s child trafficking and the Adrenochrome aftermarket?

Many argued that Che’s joke spread a lie about the availability of the vaccine to Israeli citizens (it did). Others said it was inseparable from ancient canards surrounding Jews being clannish and spreading disease. That’s doing a bit of close reading, I think. Meanwhile, Parker and Stone, while implicating themselves, are making an explicit link between Israel, a surplus of vaccines supposedly available to a well-connected in-group and outrageous conspiracies about child murder.

It’s in jest, but then Che’s joke was not necessarily meant to be taken literally. It’s debatable whether Che’s was true in spirit; “South Park”’s conceit is certainly not, but it could be taken that way. So, where’s the outrage? Why does Netanyahu tweet one and call the other antisemitic on “Fox and Friends?”

In the end, it’s all about optics, not antisemitism. Edit around this QAnon subplot and we have what looks to be good news for Israel, touting their vaccine success. Che’s joke insinuates that that success was in many ways a failure tied to a much larger systemic problem.

It’s quite something that we can assume satire for one premise and impute the worst intentions for the other. I guess it’s perfectly fine to jokingly peddle myths of Israeli control — so long as you make Israel look good in the process.