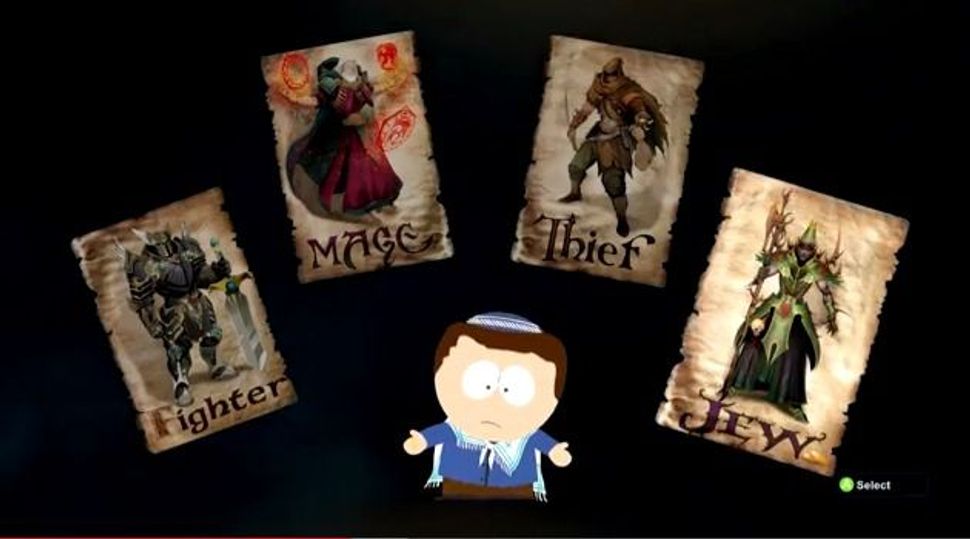 The long-awaited “South Park” game has a little surprise for members of the tribe: you can play one.

A video preview of the game’s opening sequence, released on Friday, outlines the basic storyline. You, the player, are a new kid in the quiet little mountain town of South Park, Colorado. Your first quest? Make friends. To do that, you need to join the local kids in a Live Role Playing Game (LARP) (As Times of Israel points out, LARPing basically means engaging in a village-wide game of Renaissance Fair, costumes, characters and all.)

Once your first friend leads you (the player) to the main game headquarters, you are greeted by Cartman the Wizard — really just Cartman in a turquoise Dumbledore hat — who acts as a guide and explains the rules.

The mission is to find and control the mythical “Stick of Truth.” Each player must choose a character class to belong to: mage, fighter, thief or… Jew.

In the promotional video, the player chooses “Jew”. His costume? A tallit and yarmulke. His fearsome weapon? A shepherd’s crook and the “Sling of David,” which causes enemies to bleed Stars of David when struck (really it’s just an old sock).

“So, I guess we’ll never really be friends,” Cartman, also the show’s token anti-Semite (for satirical reasons, obviously), greets the new character. “Welcome to the KKK, Douchebag the Jew, who can probably also handle our finances.”

The game will be released for Xbox 360 and Play Station 3 on March 4 in the U.S., and is rated for mature audiences only. But really, when has that ever stopped anyone? Get ready for some major LARPing, in a city near you.