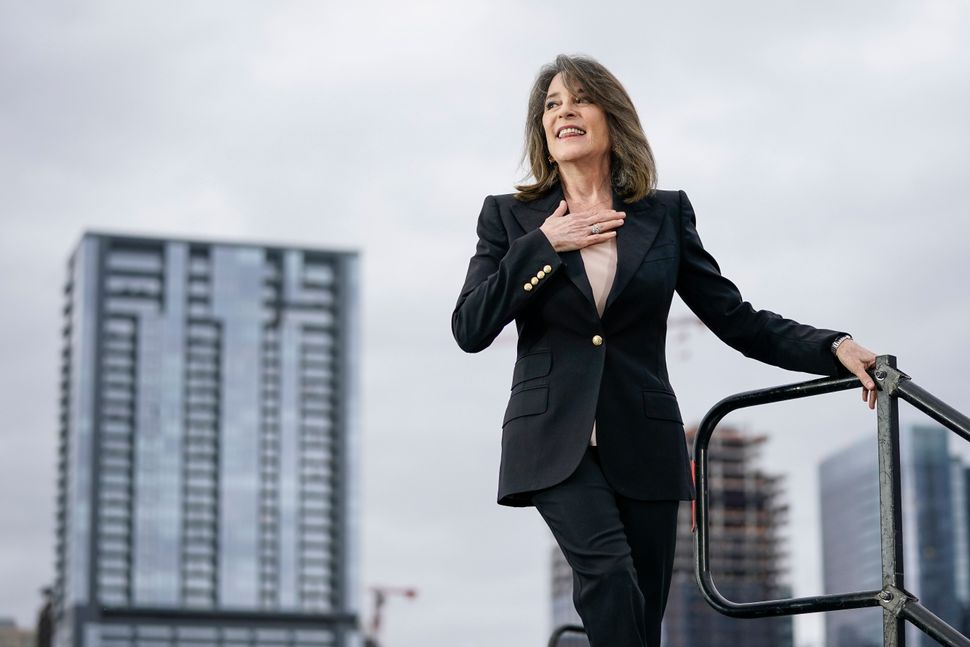 Israelis and Palestinians have this much in common: Both seem to smile and nod when Marianne Williamson’s on her nonsense.

On Tuesday the self-help author, one-time presidential candidate and “Avatar” superfan was trending on Twitter for her recent podcast interview with director James Cameron, where she revealed that she had quoted his giant blue cat movie to activists in Israel. (Her second weirdest cat-themed interview moment.)

“I was talking to some Israeli and Palestinian peacemakers,” Williamson told Cameron. “I said, ‘Well, you know, the Great Mother doesn’t choose sides.’”

Cameron nodded politely, as one does, and said, “Yes.”

According to Williamson, the Palestinians and Israelis in the room responded by nodding, their hands on their chins, seeming to consider this pronouncement in silence. (Quite possibly stunned silence.)

“I think it was because some of them had seen ‘Avatar,’” Williamson, who previously said that Cameron deserves a Nobel Peace Prize for the film, concluded.

For those who don’t remember this tidbit from a film that came out almost 12 years ago, the Great Mother is the deity of the Na’vi people of the moon Pandora. At one point in the film, the female lead, Neytiri, said the line to her lover — a wounded space soldier in an artificial Na’vi body — when he suggests fighting for the planet against rapacious capitalists hoping to extract the moon’s stores of a mineral called “unobtanium.”

What any of this has to do with the realities of life on the ground in Israel-Palestine is beyond me, but Williamson clapped back on the bird app saying that her offering of a sci-fi platitude did in fact go over well with those working hard for peace.

2/ I told Jim it was a very powerful moment & people in the room were nodding their heads. I told him that some of them told me they had seen Avatar. So the pseudo-intellectuals are having a hoot about that tonight, that I’m so naïve see, so ridiculous, so wacky & unsophisticated

“The pseudo-intellectuals are having a hoot about that tonight,” Williamson said. “That I’m so naive see [sic], so ridiculous, so wacky & unsophisticated.”

Williamson seemed to imply that much of the laughter at her expense — including earlier criticisms from that time she called the PM of New Zealand “girlfriend” in a presidential debate — is rooted in sexism. I can’t say for sure some of it isn’t, but I’m pretty confident that anyone invoking the movie “Avatar” in a discussion on peace in the Middle East would raise eyebrows. But then, Williamson advocated for an unconventional approach.

Maybe she’s right, we should try it her way. When “Avatar 2” finally comes out let’s invite a delegation of Israeli and Palestinian leaders to a screening and see if it moves the needle. Maybe Cameron will get that Nobel after all.