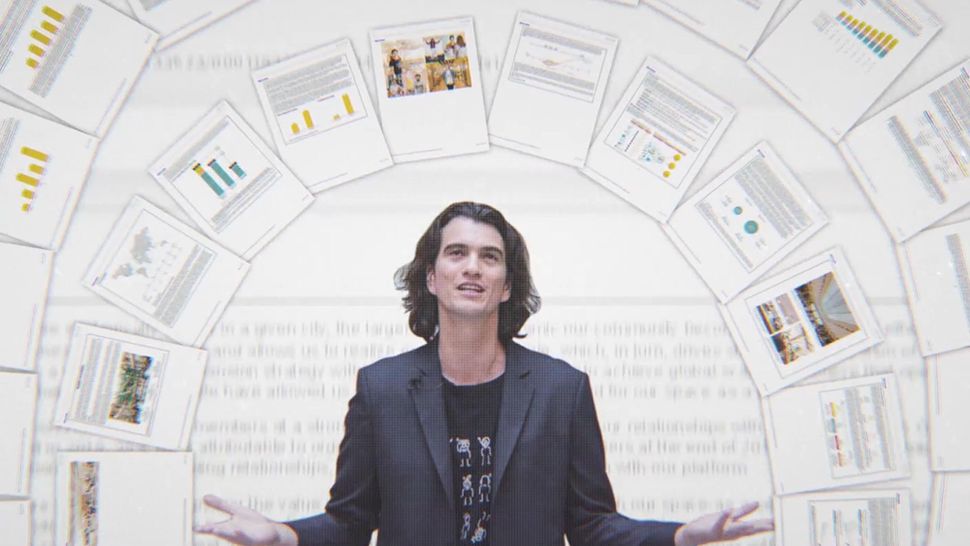 Adam Neumann in a still from “WeWork: Or the Making and Breaking of a $47 Billion Unicorn.” Courtesy of Hulu

In the opening moments of “WeWork: Or the Making and Breaking of a $47 Billion Unicorn,” we see the coworking visionary struggling through buzzwords and business speak. He rocks on his feet and paces as he reads from a prompter. It’s hard to see how anyone might have valued this guy’s business at $1 billion, much less $47.

We come to learn that we’re entering at the end. What we’re seeing is outtakes from a last ditch roadshow video preceding a public offering that will never happen. In the documentary, arriving on Hulu April 2, Neumann is not always this ill at ease. With a messianic mane and a penchant for throwing his arms out crosswise, the Israeli-born entrepreneur, towering at 6’5” had good reason to believe his own hype when he began the business in 2010 on the cusp of 30. As one critic, business professor Scott Galloway, puts it “If you tell a 30-something male that he’s Jesus Christ, he’s inclined to believe you.”

Despite a wealth of archival footage of Neumann and his Goop-adjacent wife, Rebekah — both declined to participate in the film — we’re likewise left taking people’s word on Neumann’s charm and skill as a salesman. Instead, we see ample evidence of his flaws, his limited business experience (his previous company, “Krawlers,” made clothing padded at the knee for infants) and the obfuscation the market only caught wind of three years ago when he tried to go public after operating for years in the red.

“WeWork,” which tracks the company’s unprecedented rise and dizzying plummet, belongs to a now well-established genre of Millennial Implosion stories. But its story is unlike the cluelessly vapid misfire of the Fyre Festival or the mesmeric tactics of Elizabeth Holmes’ Theranos imbroglio while sharing aspects of both. Neumann’s notion of a capitalist kibbutz had no shortage of bacchanalian trappings, from beer on tap in his buildings to retreats upstate — “Fyre Festival done right,” as one talking head puts it. Like Holmes, whose eccentric presentations promised lofty, paradigm-shifting tech, Neumann spoke of changing the world while offering nothing truly proprietary or groundbreaking. He was the brand and his acolytes trusted his vision to “elevate the world’s consciousness,” apparently by cramming diffuse businesses together in floundering real estate.

The company’s Enron-like collapse has been covered in books and at least two podcasts — if you’ve listened to either, you may be hearing a lot of the same sound bites — but director Jed Rothstein offers something new: a visual. We see Neumann walking through his many WeWork buildings, schmoozing with power players and holding forth in the culty environs of the company’s upstate campsite. Even with these glimpses at his magnetism, we’re at a loss to see why his snake oil sold.

Former allies and jaded business reporters testify to Neumann’s interpersonal gifts and knack for manipulation; still, it took a surprisingly long time for many of his more seasoned boosters to scrutinize his business model despite early signs of problems courtesy of an internal leak. Galloway, a committed skeptic from the beginning, found that the company valued WeWork floors at a higher price point than the buildings they existed in. While many raised their eyebrows at the We Company’s expansion into childcare (WeGrow — Rebekah’s baby) and co-living ventures (WeLive), Neumann’s primary business of renting desk space — with a dubious communal philosophy — drew investors. Japanese tech billionaire Masayoshi Son even granted him $4 billion and encouraged him to go “crazy” with it despite the company having little to do with his usual interests.

Neumann’s success embodies failing upward and winning unwarranted second, third and fifteenth chances, all while he overpromised and underdelivered to his employees both in salary and stock options. Of course, it all came crashing down after a 2019 financial disclosure document revealed beyond a doubt that the company was consistently running at a deficit and Neumann implemented such dubious business practices as buying buildings and asking his own company lease from him and trademarking the word “We.” How he got away with it for nearly a decade remains a mystery chalked up to a charisma that doesn’t come through.

Perhaps Rothstein’s decision to start his film with Neumann at his lowest point poisons the well for any positive reception to the disgraced CEO’s grand designs. That and the flood of media criticism — and scandalous details, including his choice to leave pot behind on a transcontinental flight to Israel — heaped on after his 2019 ouster make it tough to go in fresh.

In bookending the film with the flatulent, nervous roadshow footage, we’re meant to see that Neumann’s true talents were spontaneous and best deployed off script — away from such pesky considerations as overhead and profit. But the true depth of his savviness hasn’t been caught on camera. We take for granted that Neuman is, as Rebekah said on their first date, and he repeated often to audiences, “full of shit.” (An epilogue tells us that Neumann received a nearly $2 billion parachute from WeWork, that the company’s new CEO hopes to go public this year and that Neumann and Rebekah’s newest venture is called SOLFL (Students of Life for Life) a “platform that provides a hyper-localized, personalized, conscious education to fluidly nourish the mind, body and soul of all learners,” whatever that means.)

Failing to fully present Neumann’s allure, the film makes a last minute pivot to something more nebulous behind his concept — the COVID-era appeal of sharing space with others. Subjects don their masks for the camera as Neumann’s former assistant waxes poetic about people needing people. It’s a hackneyed dismount, but more persuasive than anything Neumann promised.