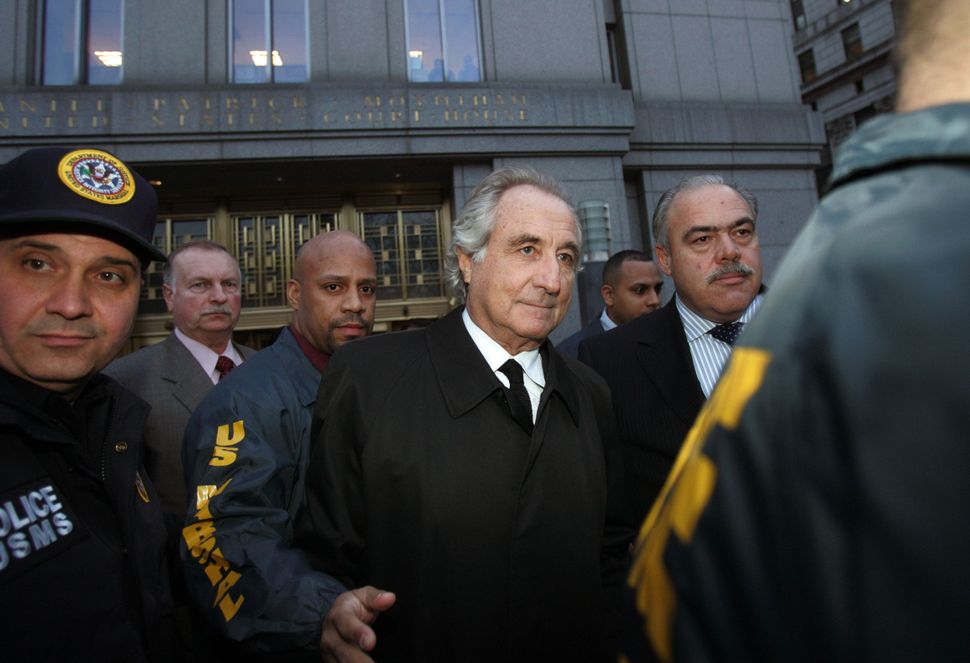 Bernie Madoff after a 2009 bail hearing. Photo by Getty/Hiroko Masuike/Stringer

Bernie Madoff is survived by his wife, Ruth — and the thousands of people whose lives he upended.

The effect of the disgraced financier’s machinations rippled. Jewish non-profits reeled when the Ponzi scheme came tumbling down. Fortunes and more modest savings were lost, and so were the jobs of many who worked for Jewish institutions.

Victims waited years to recoup their losses. Many who were elderly died waiting. Some who lived still are. How do those affected feel now that Madoff is gone?

The victims were just so devastated. To be in the last years of your life, to have it turned upside down, is a horrific experience. I saw people go into a deep depression; I saw people close down and live the rest of their days in great despair. I think the real tragedy, as we’re contemplating this date, is: Are we in a different place now? Is there a positive benefit from all this? I would say the jury is very much out.

My biggest sadness is because so many thousands of people were devastated by this and I’m largely unconvinced there’s been any effort whatsoever to modify the investor protection apparatus. So if this kind of fraud happens again — and it will, there will be innocent victims — we’ve done nothing to improve the protections for everyday investors.

Kent saw her parents lose the bulk of their retirement funds to Madoff’s fraud, and later founded the Madoff Survivors Group.

I don’t dance on people’s graves, but I’m not losing a wink of sleep over it. The man destroyed so many lives and legacies. It’s unfathomable to think he wanted a compassionate release from jail.

What upsets me most is that he took away the joy from my parents’ final years. My father, who built a medical practice from nothing, had this wonderful life: He had a wife, four kids, two grandkids, and five great grandkids. They all had relationships with my parents. But something just went out of my father when this happened. He considered himself a failure.

He was a victim of a crime, and I wrote it in his eulogy: “Daddy, you were a victim of a crime and it robbed you of your happiness.” None of that mattered to us four kids. We didn’t care that he lost money, we’re just glad that we had him as long as we did.

It’s intangible, the effect that this man had on so many lives. And to read that he considered his victims “suckers,” just irritates the heck out of me.

After moving from New York to Philadelphia for a job at a Jewish non-profit, King was let go when donors lost money to Madoff.

I’m not mad now in the universal scheme of things, because it got me to city I love, but it was awful uprooting my whole life and then having the rug immediately pulled out from under me. I’m not sure how many people they ended up having to lay off.

I think the Jewish communal landscape forgets that a lot of Jews live paycheck-to-paycheck. I sometimes wonder what happened to people who were planning a wedding or bar mitzvah…. I ended up leaving [the job] off my resume because people just didn’t understand how I lost a job in 12 weeks. It was better to pretend I had a resume gap than to explain that Bernie Madoff stole my job.

I’m glad that at least Madoff went to prison. Too many rich dudes cheat and swindle in ways that cost people jobs, and never get punished. He really struck a huge blow and did lasting damage to his own community.

Frucht’s parents lost their life savings to Madoff. When she heard the news of his death she was on the road, driving to visit her granddaughter for the first time since the pandemic.

I was so distracted by what was more important to me — driving to see my little baby — that I barely thought about it. I was listening to radio the whole time I was driving, and it was not mentioned whatsoever. I was happy about that. Let him be a cipher, let him fade into the woodwork and not be celebrated or noted any more than he already has been.

My main feelings about Madoff centered on my dad: His trust for Madoff, and the breaching of that trust. My dad’s long gone, so my focus is on what’s here to be celebrated and enjoyed in life. My sisters and I have been very fortunate in our lives, and Madoff didn’t take that away from us. I wish everyone could be as fortunate as we were.