With Madoff gone, have Jewish nonprofits learned lessons from the past? 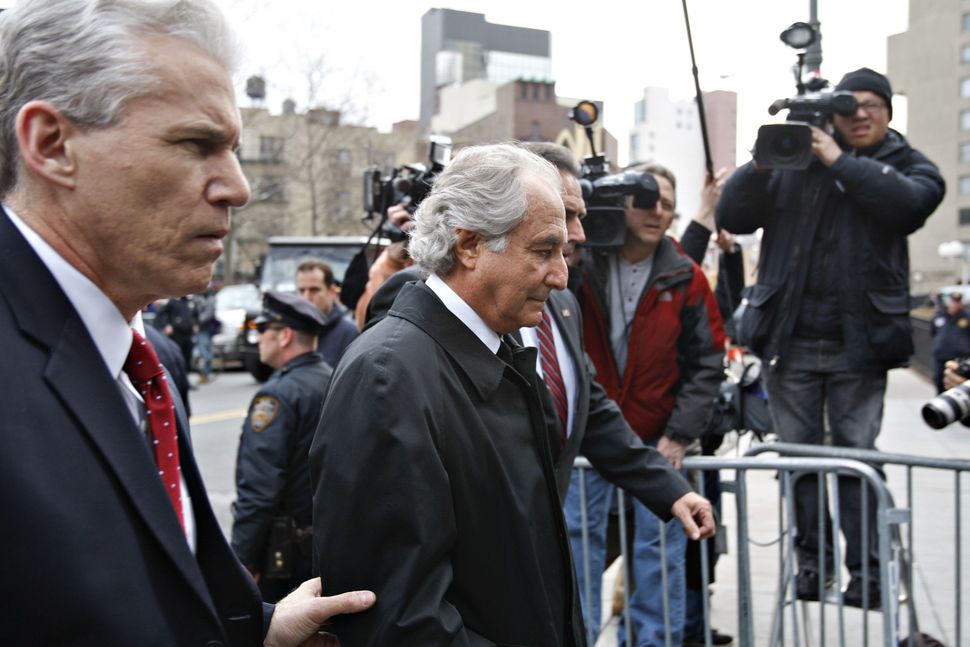 When Bernie Madoff was arrested in December of 2008, the panic in the Jewish philanthropic world was palpable.

“We are shocked at this revelation,” Yeshiva University said at the time to the Jewish Telegraph Agency. It had lost $100 million.

“This one just leaves me breathless,” Mort Zuckerman told NPR. He lost $30 million.

“I remember it as being a time of enormous uncertainty,” said Andres Spokoiny, now head of the Jewish Funders Network, which raised money for some of the affected charities.

“The underlying emotion was uncertainty and fragility,” added Spokoiny, who was working for American Joint Distribution Committee, a Jewish relief agency, at the time. “There was a fear of the domino effect that, fortunately, didn’t happen to the extent that we feared it. But it was a big shock.”

Long before Madoff died on Wednesday, in prison at age 82, many Jewish nonprofits recouped their losses from his crimes after federal marshals sold Madoff’s real estate, investments and assets like art and boats, and after investors who profited unknowingly off the scheme had to return the money. And people who work in the Jewish philanthropic world say that as the financial sting has faded, a lot of bad habits have outlived Madoff and the devastation he caused.

Some parts of the Jewish nonprofit sector are now awash in more skeptical donors and investment committees to steer financial decisions. But recent crises have cast into doubt whether the industry is ready to avoid its next scam, or whether bad actors continue to slip undetected into boardrooms, as Madoff did so many times before his downfall, based on word of mouth in an Old Jewish Boys’ Club.

Experts on the Jewish financial world said that Madoff, who was convicted of securities fraud and 10 other felonies, and who was serving a 150-year prison sentence in North Carolina when he died, relied on an expectation that he, as a fellow Jew, would never betray a Jewish group or individual that invested with him. He projected an image of being trustworthy, they said, in part because he had his own charitable foundation that was generous to causes related to lymphoma and bone marrow registries.

(The Forward Association, this publication’s governing board, invested $355,000 in a fund that itself invested in one of the funds that a client entrusted to Madoff.)

They described a culture in Jewish philanthropy that frowned upon — and sometimes continues to frown upon — questioning investment professionals or others offering services or money like Madoff, lest organizations appear ungrateful or untrusting.

Since Madoff’s scheme came to light in 2008, Spokoiny said, most Jewish nonprofits have adopted a philosophy that bans investing in funds without knowing underlying assets. He also said a lot of organizations have prioritized “cognitive diversity” on investment committees to prevent the kind of blind loyalty that was handed to Madoff.

“It was like the unfortunate crash of an airplane that helps the plane manufacturers design safer airplanes for everybody,” he said.

But while more skepticism and a more professionalized relationship to investing might have trickled into the Jewish nonprofit sector as a result of Madoff’s Ponzi scheme, Lila Corwin Berman, an historian at Temple University and the author of The American Jewish Philanthropic Complex: The History of a Multibillion-Dollar Institution, said that the post-Madoff world doesn’t look all that different.

Jewish organizations, like the charitable sector generally, are increasingly reliant on big money donors. There still isn’t full transparency, as donors can give through donor-advised funds and with anonymous gifts. Some charities continue to prioritize — and expect — rapid growth of their endowments in ways that could make them vulnerable to fraud.

“There certainly continues to remain the belief that there should be a way for whatever money that is involved to continue to grow and for that money to represent security,” Corwin Berman said. “When that becomes such a focus of how a community thinks about its vitality and measures its vitality, then I think fraud is always possible.”

And reliance on financial forces like Madoff is still widespread.

The interconnectedness of the mega-donor Les Wexner and Jeffrey Epstein, the disgraced financier and convicted child rapist, illustrated that untangling the web of nonprofits and gifts is still a challenge that can make all parties vulnerable to public-relations and financial minefields.

In 2019, several women accused the philanthropist Michael Steinhardt of sexual misconduct, leaving the Hillel at the University of Pennsylvania scrambling to decide if the institution needed to rename its building, dubbed Steinhardt Hall. A similar situation bubbled up in 2019 after the Sackler Family settled a lawsuit with the state of Oklahoma for misleading doctors and the public about the addictive nature of OxyContin.

Those types of discoveries can also generate a wariness about putting the financial pillars of dependent Jewish charities at risk.

“Are there areas where there’s a reticence to look under the hood? Yes, especially if it’s a lot of money which is of course where most damage could occur,” said Lisa Greer, a philanthropist and the author of Philanthropy Revolution: How to Inspire Donors, Build Relationships and Make a Difference.

Despite the stickiness of bad habits, it appears that what the Jewish philanthropic world itself most wants is to move on.

A host of former Madoff investors contacted on Wednesday after his death — Gift of Life Marrow Registry, Yeshiva University, the Ramaz School, the Maimonides School, the Elie Wiesel Foundation for Humanity, the Carl and Ruth Shapiro Family Foundation, the Mortimer B. Zuckerman Foundation, Technion Israel Institute of Technology, the Jewish Community Foundation of Los Angeles, the Jewish Federation of Greater Washington and the American Jewish Congress — all either declined to comment or did not respond to inquiries.

Hadassah, the pro-Israel women’s group, one of the Jewish organizations that had to give back money procured unknowingly through the scheme, also did not want to revisit that era.

“What happened as a result of Bernie Madoff’s actions took place a long time ago,” Alix Friedman, a spokesperson, said in an email. “We have moved forward.”

With Madoff gone, have Jewish nonprofits learned lessons from the past?