Labzik comes home to Berl’s family in the Bronx. Courtesy of Jake Krakovsky

Comrade Labzik is incredibly expressive. He barks, wags his tail and runs through the halls of a public school with leaflets calling for a student strike. He is made entirely out of paper and, at his smallest, is half the size of a Scotch tape dispenser. He’s a puppy puppet — many puppets, really, all of which know different tricks but are ideologically consistent.

“I call him leftist Lassie,” said Miriam Udel, associate professor of Yiddish language, literature and culture at Emory University, whose theater is producing a filmed puppet show of “Labzik: Tales of a Clever Pup,” available to stream May 24.

The show is based on a collection of Yiddish children’s stories by communist writer Chaver Paver (ne Gershon Einbinder), who published them in 1935 for use in secular Yiddish afterschool programs. The stories follow the titular pup, left on a Bronx subway platform by a Brownsville woman down on her luck during the Depression. Labzik is eventually taken in by the family of Berl, a sewing machine operator whose children are involved in a communist youth organization. It’s not long before Labzik is attending protests at City Hall, unmasking corruption and rallying for workers’ rights. 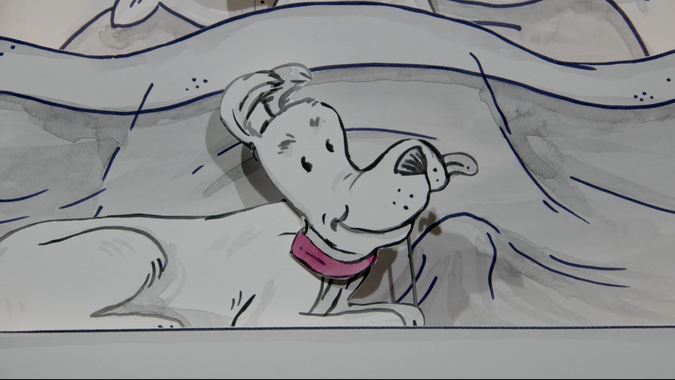 Labzik sits by the bed, having brought a doctor to his sick owner’s bedside Courtesy of Jake Krakovsky

“It would not be wrong to call these stories didactic,” said Jake Krakovsky, the director and adapter of the Labzik stories, who developed the show with Udel’s translation. “But all of his themes, all of the questions and problems that he’s trying to explain to his young readers — and offer them possibilities for how they might take action in relation to those issues — are immediately relevant to us.”

Those issues include a crooked mayor who sits down to ice cream while his constituents picket outside, school lunch programs for children with unemployed parents and even an airborne pandemic. (Other storylines for Labzik, including his getting into trouble for singing “The Internationale” and an incident involving a portrait of Lenin, aren’t being adapted, for obvious reasons.)

The notion of making the Labzik stories into a puppet show was Udel’s; she met Krakovsky when he was an undergrad at Emory and admired his puppeteering skills. Both agreed it was a good idea — if a bit complicated. But when the pandemic hit and Theater Emory was scrambling to put together a remote season, a virtual puppet production seemed a lot more feasible. Beyond that, filming the show allowed for much of the dialogue to remain in the original Yiddish with the addition of subtitles. Protesters at City Hall from the Labzik episode “Labzik and the Mayor.” Courtesy of Jake Krakovsky

Yiddishists and actors Shane Baker, Asya Vaisman Schulman and Mikhl Yashinsky are lending their vocal talents to the cast, while Emory students will take turns narrating in English. Many of the students, who are part of a course Udel led and Krakovsky assistant taught, are theater majors. Perhaps surprisingly given the subject matter, quite a few are business students too.

While Krakovsky led lectures on the Modicut school of Yiddish puppetry for the class, he is the only man behind the puppets, working the rods and strings from above and below on a 3-foot by 2-foot stage. There are around 100 paper puppets of various sizes fabricated by designer Ryan Bradburn and modelled off the original Labzik drawings by Lou Bunin. Filming the show, in “toy theater” style, has its advantages.

“Being able to see the mechanisms, to see the tiny little wire that makes his head move up and down as he barks, it’s really lovely and intimate,” said Krakovsky. 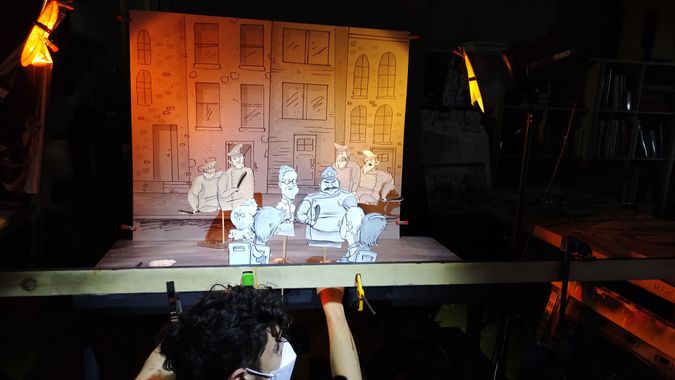 Krakovsky maneuvers puppets for a street scene in “Labzik: Tales of a Clever Pup.” Photo by Jake Krakovsky

Backing up the puppets — and the paper backdrops — is a fully-produced radio play by sound designer Melanie Chen Cole, complete with a jazz-inflected score, two-man klezmer band and even an ode to Labzik — a parody of the Yiddish standard “Rozinkes mit Mandlen” — performed during the entracte.

With the short film wrapping up production, Udel and Krakovsky are now facing a question of the proper audience. Chaver Paver’s intended one — Yiddish-fluent communist kids — is not as readily available as it once was.

“It can be a complicated sell to approach a day school and say, ‘Hey, we have this great puppet show about communism,’” said Udel, who sees the project going to Jewish film festivals before they approach institutions, which are, largely by their nature, cautious when it comes to their programming.

But while Chaver Paver’s politics — and that of his beloved canine creation — were radical, most of their messages weren’t.

“The stories we’ve chosen, they all fall in line with what we would consider broad progressive ideals today,” said Krakovsky. “We are still living in the post-World War II idiom where anything associated with communism is a one-to-one ratio with the greatest crimes of Stalin. That wasn’t true for these people at the time and it’s not true now, and in fact, there’s still so much that we can learn from these folks and from the writing and from the art that they made.” 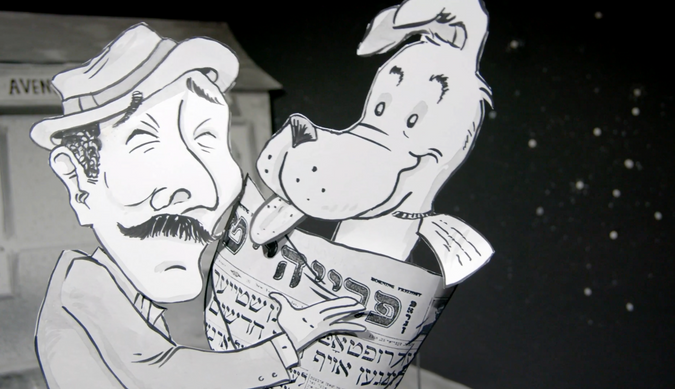 Berl wraps Labzik up in the Morgen Freiheit, a Yiddish paper initially affiliated with the U.S. Communist Party. Courtesy of Jake Krakovsky