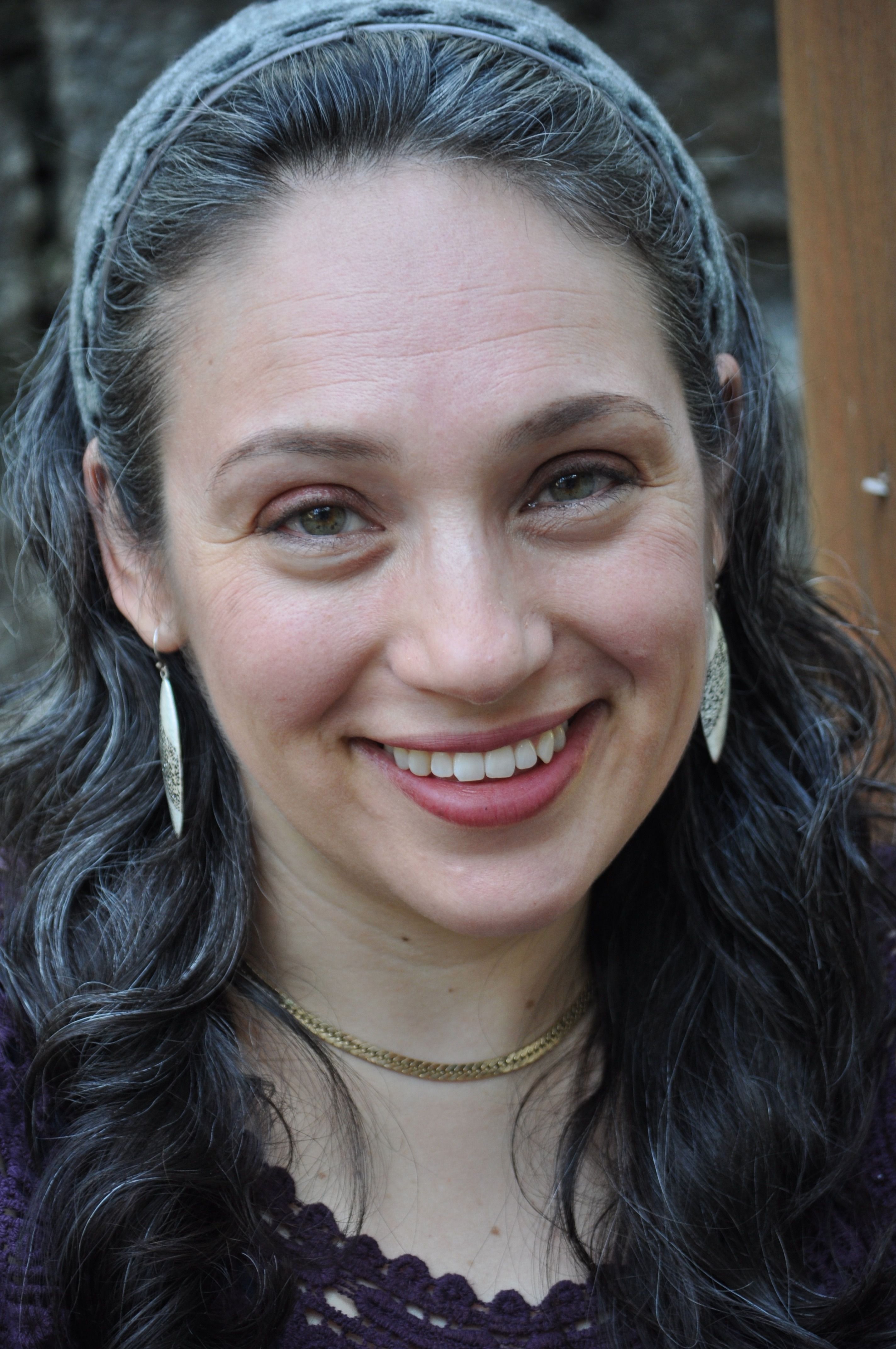 “Labzik: Tales of a Clever Pup” by Chaver Paver, the pen name of Gershon Einbinder, features a proletarian mutt who usually brims with compassion for the underdog — but even a good dog can have a bad day. Published in 1935 by the communist-aligned International Workers Union (IWO) for use in its network of Yiddish afternoon schools, the collection of twelve stories includes one episode in which Labzik needs to learn to resist his own basest reflexes and reject racism.

Labzik is adopted by a working-class, Bronx-dwelling Jewish family that confronted the Great Depression with resolve, unity and good humor. He helps his humans — Papa Berl, a sewing machine operator, Mama Molly, brave brother Mulik and tender sister Rifkele — stand up to injustice, and generally makes himself useful, and even heroic. He serves as a living alarm clock, bites an abusive policeman, fetches the doctor when Rifkele is ill, fends off a bourgeois Boy Scout, adduces wordless proof of a politician’s lying and rescues Berl from union-busting goons. He single-handedly (okay, quadruple-pawedly) saves the 1932 Hunger March on Washington, although no dogs are noted as actors in the event in the historical record.

Labzik is clever, and though he is constrained by the demands of reality (and literary realism) to running, jumping, licking, biting, raising his ear and wagging his tail, he nevertheless manages to be, well, a real mensch.

But even the cleverest and most clear-eyed among us harbor unexamined biases in need of dismantling: “A dog, after all, is a dog,” as the narrator avers. In one singular episode, Labzik is the anti-hero who must learn to do better. He bites Noah, the block’s only Black child, just because of his dark skin, an act born of stark prejudice. Labzik’s family and friends are aghast. Ever ready to mimic adult methods like striking, sit-ins and pamphleteering, the children convene a tribunal that sentences the social animal to the harshest punishment possible: a week of ostracism.

By the end of his sentence, Labzik has learned his lesson, and by the end of the story, Chaver Paver has reinforced the antiracist message that was central to the communist movement’s platform. The 1936 manual for the Communist-linked IWO noted that among “the artificial barriers which today serve to separate the workers,” the worst was “white chauvinism (the theory of white supremacy).”

85 years on, the phrase “white chauvinism” rings slightly quaint. But identifying the root of many of America’s ills in the “theory of white supremacy” sounds downright contemporary. And, in fact, attention to this country’s race problem was among the issues that led to eventual schism between communists and Bundists. The IWO’s newspapers, summer camps and network of Yiddish-speaking after-schools furnished the bulk of Chaver Paver’s readership — and reinforced the values he sought to convey.

Chaver Paver wanted to be honest with his youthful readers about the world as it was, while motivating them to improve it. The very next chapter after that in which Labzik must confront his racism is the book’s longest: in “Labzik and the Pioneers,” Noah, Mulik and their friend Hymie lead their public school in a peaceful strike agitating for subsidized lunches for their hungry classmates. The villainous principal arrays every source of institutional power available to him against the movement’s leaders, calling in the police, the dog catcher, the fire department and the school board. A venomous police captain assails Noah as a “Black Bolshevik” and raises his club, ready to strike the brave boy. But Noah’s community of allies rally to keep him from harm, and Labzik, having truly learned his lesson, is among them.

Labzik and the Black Boy

And what might it be that he didn’t understand? A boy had come over to the house, a friend of Mulik’s. That’s good, right? But no: for Labzik it wasn’t good because the boy’s face was different from those of all the other boys on Jackson Avenue.

When the boy with the different face came in, Labzik hadn’t noticed because he was off outside barking at the cat next door. Once he was all good and barked out, he went inside, took a look, and didn’t like what he saw.

The boy had curly hair. That was fine. Many boys have curly hair. His nose was short and turned up. That didn’t bother him. He, Labzik, wasn’t picky when it came to noses. The boy had little ears. That didn’t matter. But what did matter to Labzik was that the boy’s face was dark. He had never seen anything like it, and it upset him a great deal. Why should it have upset him so much, we don’t know. But a dog, after all, is a dog. 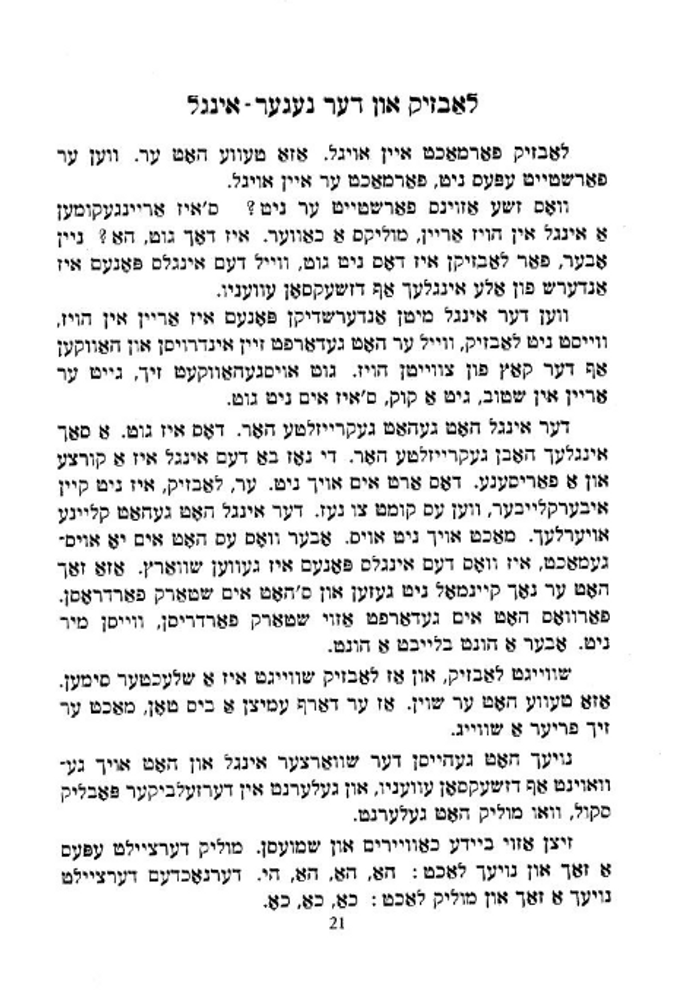 The beginning of the chapter in the original Yiddish. Image by Yiddish Book Center

The Black boy was called Noah, and he lived on Jackson Avenue too and attended the same public school as Mulik.

The two friends were sitting together, talking. Mulik was telling a story, and Noah was laughing, “Ha, ha, ha, hee.” After that, Noah told a story and Mulik laughed, “ha, ha, ho.”

Noah let out a scream of pain. Mulik, startled, called out, “Mama, Mama!”

Mama Molly ran in and quickly sized up what had happened. Not one to get flustered, she immediately took a clean towel, ran water over it, and used it to bandage Noah’s leg.

Labzik realized right away that he had caused a real problem, so he crawled under the bed and hid.

Noah was hurt, and he cried a little. Mulik went and got a stick, dragged Labzik out from under the bed and gave him ten lashes. Labzik understood that he had it coming, so he kept quiet and took the beating.

Noah went home, and the matter might have been forgotten had Blond Hymie not run into Noah and found out about the whole thing. So he came running over to Mulik’s and shook his fist:

“Mulik, your Labzik is a white chauvinist, a racist.”

“A white what?” Mulik wondered, not understanding the word at all.

“What does that mean?” asked Mulik, a bit deflated that he didn’t understand the word.

“A chauvinist,” Blond Hymie started to explain, “is somebody who thinks that he’s a hotshot and everyone else is worthless. And a white chauvinist, or racist, thinks that only whites are the best people and Blacks are worthless.”

“Really?” Mulik was getting mad. “Hey, you Labzik, you disgusting white chauvinist, I’m gonna show you!”

Soon Berl the Operator’s house was full — with Leybl, Willie, Ronnie, Davey, Noah, Pearl, Merle and even more kids from Jackson Avenue. There were just three chairs, so everyone else had to sit on the floor. Once all the kids were seated, Labzik remained under the bed. He was so scared that his ears were trembling.

They dragged him out and ordered him to stand in the middle of the apartment, facing Noah with his bandaged leg. Labzik looked at Noah and blinked his little eyes. Hymie told the children what had happened. They were furious. Hymie asked what should happen to Labzik for doing such a thing. They talked and talked until they decided… well, Labzik didn’t know what they had decided. But all the children suddenly went away and it was so quiet inside.

Labzik stood there, not knowing what to do. He saw Mulik sit down and start to read a book. Labzik wanted to make up with him, so he ran right over to him and tried to give him a lick; Mulik turned his head away. So Labzik trotted over to Mama Molly to give her a lick, but she turned her head away from him too.

Then he scampered over to Rifkele, and she turned away from him too. Finally, he went up to Papa Berl, but he too turned aside.

Labzik was getting terribly scared, so he ran outside to the street. He saw Ronnie playing with Sylvie, but they also turned their heads away from the doggie, that white chauvinist. He tried running up to Benny and Davey, but they too turned away.

So this was his punishment! The children had determined that for one whole week, nobody was allowed to speak a single word to Labzik. What Labzik felt throughout that week is indescribable. It was so hard and bitter for him that he was just about ready to throw himself into the river. But how great was his joy when the week of punishment was over!

Never again would he go around biting Black boys who’d done nothing at all to him. Oh no, not even if you gave him an entire house full of lambchops would he ever do that again.

Miriam Udel is associate professor of Yiddish language, literature and culture at Emory University and editor and translator of Honey on the Page: A Treasury of Yiddish Children’s Literature (NYU Press, 2020).