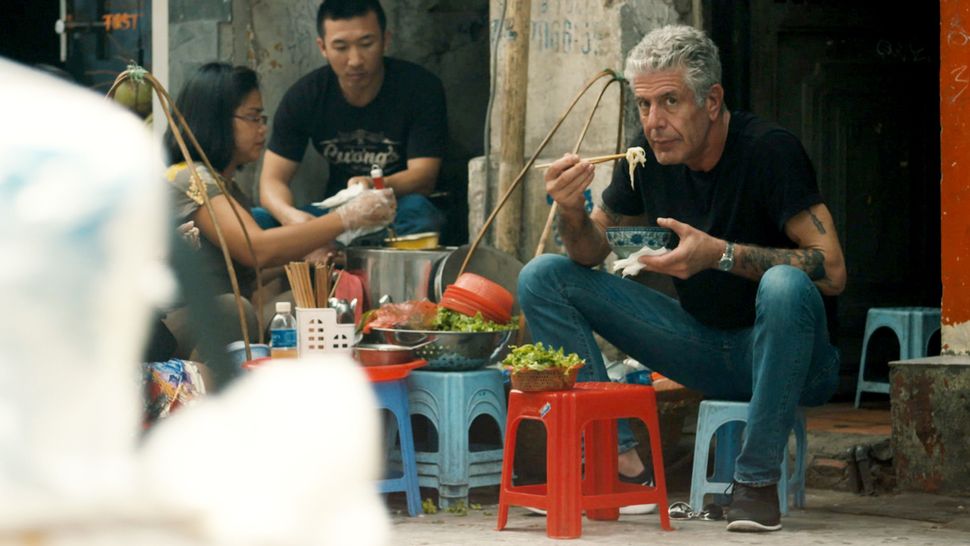 The best episode of Anthony Bourdain’s food and travel show “No Reservations” is probably “Beirut.”

Bourdain and his crew were in Lebanon in 2006. They filmed two scenes and then the second Israel-Lebanon war started. Bourdain’s local fixers knew what was coming and the host had to reckon with what he was doing — the entire project of the show’s food tourism, beamed to an audience of cable subscribers. Lounging by a hotel pool as helicopters flew overhead and children told him that their houses had been leveled, he finished the episode with an iconic soundbite, different from any he’d recorded before.

“In the few years since I’ve started to travel this world, I’d found myself changing,” Bourdain concluded. “The cramped cynical worldview of a man who’d only seen life through the narrow prism of the restaurant kitchen had altered.”

One could see the change happening, if not in real time, something close to it. The edgy chef-turned-bestselling author was losing his jade. Travel had begun to convince him that “the human animal was perhaps a better and nicer species than I’d once thought.” He started to believe that “the dinner table was the great leveler, where people from opposite sides of the world could always sit down and talk and eat and drink, and if not solve all the world’s problems, at least find, for a time, common ground.”

Beirut changed the formula again. “Maybe in the real world, one without cameras and happy food and travel shows, everybody, the good and the bad together, are all crushed under the same terrible wheel,” Bourdain said. “I hope — I really hope — I’m wrong about that.”

In Morgan Neville’s “Roadrunner: A Film About Anthony Bourdain,” we of course see footage of the Beirut episode. We learn that Bourdain, who wrote his own voiceover for the show, was resistant to the typical “sum up” conclusion. In fact, he didn’t even want the episode to air, wary of “exploiting the experience.” For better or worse, though, the episode’s philosophical musing — steeped in humanity and doubt — helped shape his legacy.

Neville’s film is intended as a corrective, determined not to dwell on the dour or make a film about Bourdain’s 2018 suicide, but to underscore his personality. Subjects ranging from fellow chefs, the producers of his travel shows and his second wife attest to Bourdain’s nature as a romantic, if one haunted by the world’s — and his own — failure to live up to his ideals. Piecing together Bourdain’s life through a wealth of archival footage and outtakes, the film falls short as a biography.

The problem is that Bourdain was his own best chronicler. Not even a talent like Neville, whose last feature-length profile, on Mr. Rogers, courted universal acclaim, can equal his gift for presenting his unvarnished, deeply empathic, sublimely flawed self.

Perhaps the best episode of one of Bourdain’s other shows “Parts Unknown” was “Massachusetts,” specifically Provincetown, where Neville’s film begins and where, Bourdain noted, the pilgrims first landed and he did too. It was there he started washing dishes and was introduced to the heroin he became addicted to — and he devotes much of the episode to the opioid crisis plaguing America.

Neville doesn’t dwell long on the origin story, though, opting to start at Bourdain’s career proper. We meet Tony Bourdain when he is the rebel chef at Les Halles, writing in his off time and encountering a spate of unanticipated publicity.

The era of his struggle with addiction, the rock bottom that ended up fueling his rise, doesn’t receive much notice and yet feels essential to understanding him. We do get glimpses of something new from the film: a home life with a wife and child that he would end up leaving. The camera pans over packed suitcases. We revisit episodes of his shows that fulfilled a dream (“Apocalypse Now” and “Heart of Darkness” led him to a Congo riverboat) or where his involvement in local life caused a problem.

His travels provide an apt metaphor — and probably a title — for someone running away from himself.

The root of this issue is only ever adequately broached by Bourdain, who reduces his substance use disorder to a form of revenge on “parents who committed the unpardonable sin of loving me.”

One needs to do some work connecting the dots from his happy upbringing and his perceived failure at being a father, even if we have a literal scene of him on the psychoanalyst’s couch. As for his addiction, his friend, artist David Choe says his “addiction jumped” in his last act as he became obsessed not with a drug or experience, but a person.

Bourdain’s love affair with actor Asia Argento is, despite one careful caveat from a director on “Parts Unknown,” presented as his downfall, an uncomfortable cherchez la femme rationale. Bourdain becomes monomaniacal about his love for Argento, letting her direct a disastrous episode of his show and transforming into what industry friends viewed as a particularly unsparing avenger on behalf of the #MeToo movement, of which Argento became a figurehead as a survivor of Harvey Weinstein. (Interestingly, references to denied allegations of Argento’s own sexual assault of a 17-year-old, who she said Bourdain paid off, are not mentioned, nor is Argento interviewed.)

Neville’s edict, “to make a film about why he was who he was,” not why he killed himself, loses steam in its long lead up to the tragic end. At the last minute, the director pivots to celebrating Bourdain’s life, but it feels unearned. Perhaps this is signaling how Bourdain’s own choice of ending — hanging himself after seeing tabloid photos of Argento with another man — was tragically kneejerk, especially for a man so masterful at crafting a narrative.

But Neville’s way of wrapping up the story, while messy, is still too neat, too self-aware, not allowing for the ambiguity that Bourdain so often brought to bear in his best episodes.

Watching the ending, I was reminded of what Bourdain said in an outtakes from the “Beirut” episode, before he had penned the now famously doubtful “sum up.”

“There’s just no need to sum up to this story.”