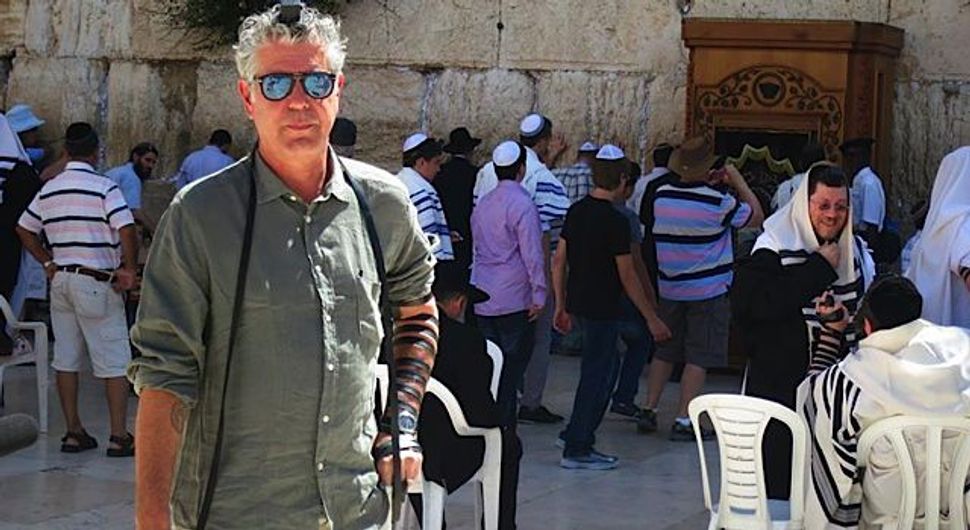 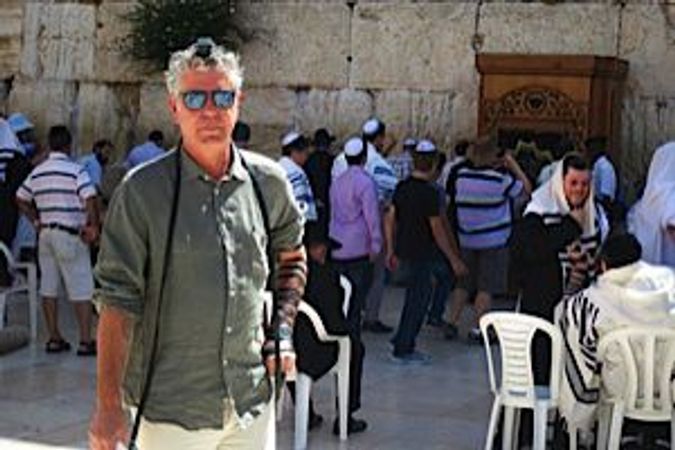 Anthony Bourdain, whose mother was a secular Jew, died of an apparent suicide on June 8, 2018. Here’s how the Forward covered an episode of his food show in the Holy Land.

I have one significant exception: anything containing Anthony Bourdain. The foulmouthed but insightful former chef’s shows are must watch events for me. Part entertainment, part essential culinary education, I’ve watched Tony travel around the world and try foods that have made me board airplanes and foods that no matter how evolved my palate becomes I will never want to eat (sorry, the fire-roasted anus of an animal in the Namibia episode was just too much).

But until this year (and tonight’s episode, the premier of this season’s Parts Unknown) Bourdain had never traveled to sample the cuisine I know best — Israeli food. In 2011 Rob Eshman at the Jewish Journal wrote an open letter urging Tony to take a trip to the Holy Land, around the same time a Facebook group called “Send Anthony Bourdain to Israel” cropped up.

Well, it took 11 seasons, but Bourdain finally arrived. What could have been a spectacular episode focusing on the emerging food cultures of Israel and the Palestinian Territories turned into perhaps the most disappointing Bourdain show I’ve seen.

The segment starts with Tony, in his typical fashion, pondering aloud: “It’s easily the most contentious piece of real estate in the world…and there’s no hope, none, of talking about it without pissing somebody if not everybody off.” That may very well be true, but instead of embracing his patented “Fuck-You-I’ll-Say-Whatever-I-Want” attitude, Bourdain spends the episode looking physically uncomfortable and trying desperately to cover his bases and not, as he says, piss anyone off.

He divides his time between the Kotel and Old City, a West Bank Settlement, an Arab refugee camp and even Gaza, trying to provide something for everyone. So intent on discussing politics and daily life he overlooks how religion impacts the region’s food and nearly misses the meal served to him on a visit to a Palestinian cooking school in the West Bank. And, most significantly, he leaves out any discussion of what defines Israeli cuisine and West Bank Palestinian cuisine.

Commenters and bloggers long criticized Bourdain’s delay in filming the show, saying he shied away from addressing the politically charged conflict — a claim that likely has some truth to it.

Initially, however, I was thankful for the delay. Israel’s culinary scene has developed immensely in the past few years both domestically namely in Tel Aviv and Jerusalem and abroad thanks to the international bestselling cookbook “Jerusalem” by London-based chefs Sami Tamimi and Yotam Ottolenghi (who joins Bourdain for a part of the show). I hoped the time would allow Tony to get a real taste of what’s being served on tables around the country. But, he barely scratches the surface and spends scant time discussing food with Ottolenghi, who is arguably the most significant Israeli chef in the world.

The wait did, however, pay off in one significant way. Bourdain’s recent migration from the Travel Channel to CNN was likely what allowed him to gain access to Gaza. By far the most interesting segment of the show takes place in the congested territory with Palestinian-American cookbook author Laila el-Haddad who breaks down Gazan food into three distinctive cuisines — the dishes of 1948 refugees, spicy Gaza City specialties and the seafood heavy cuisine of the coast. But, besides this scene and a stop at Majda, a restaurant co-owned by a Palestinian husband and an Israeli wife in the Jerusalem foothills, the episode is shockingly devoid of food.

The episode had its entertaining moments: a shot of Bourdain donning tefillin at the Kotel is priceless and his crass joke about “What Would Jesus Wear” after spotting a crown of thorns got some laughs from my fellow viewers. But — perhaps in an effort to not offend some viewers — the episode was noticeably short on his signature one liners. Oddly cut, I fear much of the crew’s filming ended up on the editing floor creating a dry episode lacking an engaging story line and frankly some pertinent food shots.

Bourdain has in many ways built his fame by acting (and talking) like a restaurant chef out of the kitchen, saying what many are thinking but would never say. His comments are bound to offend some, but when he keeps his mouth shut, everyone loses.