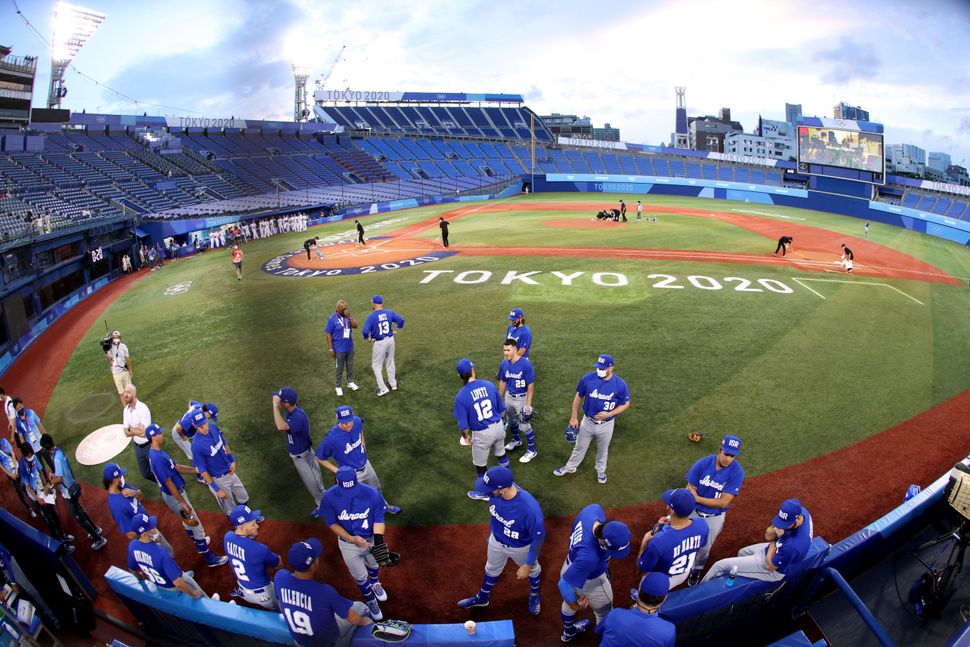 Team Israel prepares to take the field to face South Korea in its first game of the Tokyo 2020 Olympics. By Koji Watanabe/Getty Images)

Is this an example of — gasp — dual loyalty? Probably! But hey, it’s the Olympics! You can root for whoever you want. Really.

Still, if you’re an American baseball fan feeling conflicted about cheering against your country of birth, it might make you feel better to realize that tomorrow’s baseball game won’t be the first time the first time the two countries have squared off. Usually the stakes have been much higher.

Over the years, tension has simmered between Israel and the United States over things as small as pistachios and as large as the Sinai Desert. The longtime allies have wrestled over foreign policy and raced over technology.

This brief tour through history will allow you, the reader, to (game show audience voice) TEST! YOUR! LOYALTY!

If you can’t beat ‘em, buy ‘em. The tech industry of the so-called Startup Nation has produced an outsized share of mega-hits that were so good that its American counterparts had to buy them out of competition. (Hooray, capitalism!)

It started back in the ‘90s with the Israeli instant messaging service ICQ, a product of Tel Aviv-based company Mirabilis that became a global phenomenon. Eventually, America Online, whose chat product, AOL Instant Messenger (AIM), allowed you to “warn” other users, bought ICQ to boost its own messaging service. Not sure why the warning feature didn’t live on in contemporary social media, but we’re all worse off and infinitely less entertained without it.

The battle for users between American and Israeli tech companies that began in instant-messaging materialized again in cell-phone navigation products. The reign of the popular, reliable Google Maps app seemed unshakeable before the cheeky, clever Waze came along. Waze was like Google Maps’s capricious Israeli cousin. It urged you to take side streets, directed you to make unprotected left turns onto six lane arterials, told you when cops lurked around the corner, and rewarded you for reporting road activity. And then Google bought Waze, for a cool billion dollars in 2013. You can still get Waze on the app store — but your location data now goes to Mountain View, too, not just Tel Aviv.

Ah, the sweet salve of time. Back in 1956, Israel, France and the United Kingdom were agitating over Egypt and especially its president, Gamal Abdel Nasser, who was nationalizing the Suez Canal. The three countries agreed to invade the Sinai Desert. While France and the U.K. were routed by Egyptian forces, the Israeli Defense Force gained control of much of the Sinai Peninsula, and Prime Minister David Ben Gurion, proclaiming the dawn of the “Third Kingdom of Israel,” looked poised to annex it.

That’s where the United States and President Dwight D. Eisenhower came in, threatening major economic sanctions unless Israel withdrew from the Sinai. Eventually Ben Gurion caved. And that was the last dispute Israel and the United States ever had! Ha ha.

Somehow, this is not a euphemism. The hype around the reddish nuts in Israel is almost mythological, but due to ongoing economic sanctions against Iran — imposed at Israel’s behest, it should be noted — Israelis can’t buy them. And yet…they have been, much to the chagrin of the United States (which exports its own). Over the years, Iran’s pistachios have made their way into Israel via Turkey, eliciting much outrage from American officials, who demanded the Israeli government — wait for it — crack down on the illegal activity.

On March 3, 2015, as negotiations over a nuclear agreement with Iran gained momentum, Israeli Prime Minister Benjamin Netanyahu, invited by Republican leaders without the Obama administration’s knowledge, flew to Washington to speak before a joint session of Congress. In a speech that lasted nearly an hour and a half, Netanyahu implored Congress to block what was shaping up to be Obama’s signature foreign policy achievement.

The speech, on an issue that sharply divided the American Jewish community, was viewed by many Americans as a political stunt, and the Iran nuclear agreement eventually passed anyway. Yet the deal — and the drama it stirred up — became a wedge that continues to drive liberal and conservative Zionists apart.

Okay, I think now we’re ready for this one. An American intelligence official who in 1987 was convicted of spying for Israel, Pollard is the only person the U.S. has convicted for spying for an ally. For violating the Espionage Act, the Galveston native was sentenced to life in prison — there was evidently some pretty spicy stuff in the tens of thousands of documents Pollard passed to Israel, and he admitted to hawking his services to other countries, too. After decades of American Jews lobbying unsuccessfully for his release, Pollard got paroled in 2015 and received his full release in 2020. You’ve probably read about this elsewhere.

Entering Olympic group play, Team Israel was ranked 24th in the world, the U.S. second. They’ve never played each other before, so it should be a fun one. For streaming information, head to NBCOlympics.com.

Special thanks to Charlie Carnow.