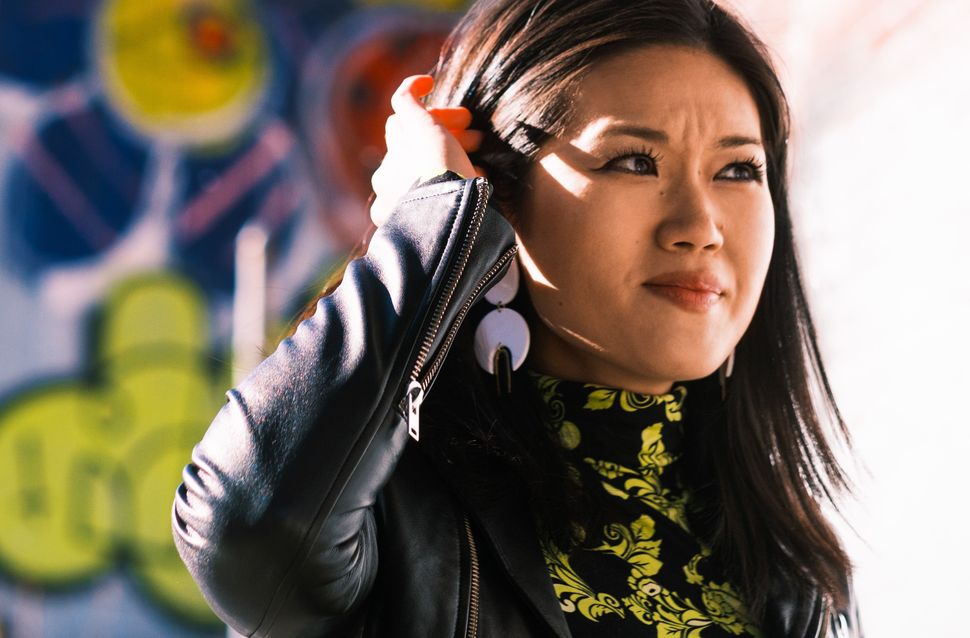 Not long afterward, she and I chatted about the book, including both what is in it and what she left out.

ROBIN WASHINGTON: Your book is written from the point of view of the child you were as you were experiencing events, such as your description of seeing nuns for the first time in an airport — “three figures all dressed in black with stripes of white.” Yet you don’t use the voice of a child.

QIAN JULIE WANG: Absolutely. I wanted to convey a firsthand experience of what I went through in those years. That goes from the use of Chinese Pinyin in the beginning of the book, when I was less fluent in English, to that Chinese phasing into American slang, to experiencing people and adults as they came to me

Because I had grown up in a racially homogenous country, I took it for granted that I fit in and I looked like everyone. And it wasn’t until I got to the Beijing airport and certainly JFK that I realized, “Oh, that’s not the case.” What is striking to a child is how different everyone else looked to me.

One thing I noticed is you employ a technique that I saw in a New Yorker short story a few months ago written by a person of color, of not making an ethnic description of people who look like you but of those who don’t, particularly white people, like one of your teachers. Was that deliberate?

Totally! I wanted to emphasize that it’s so easy for people of color to empathize with white people because they’re all over the media and they’re so humanized, fully fleshed out, and the rest of us receive less attention. I wanted to emphasize to my eyes, the white characters were the ones that were worth noting because there are elements of being white that are strange to someone from a different country. Why do you have blue eyes? How is that possible? Why does your skin burn under the sun? Not judgmental things, just odd things, and I wanted to transport the reader to what it felt like to be in that child’s shoes.

The same technique extends to how people pronounce, or mispronounce, your name. You give a quick hint at it, quoting people asking, “Is the Q really pronounced that way?” But then you step back and you don’t tell us! So can you pronounce your name, please?

My name is Chi-en Joo-lee Wong. In China, the nickname, or the little name of endearment, is always your name repeated twice. So Qian Qian. So now that I have taken on an American name, of Julie, I’m trying to merge my two selves. It always seemed odd to me to have a cross-cultural first name, but I really don’t want to code switch between my two selves and they are both equally part of me.

You’re in your mid-30s, perhaps young to be writing a memoir. But when you read the book, you see it’s very neatly centered on a specific period of your life that only makes sense at the very end — which I won’t give away!

Yet it doesn’t include anything about Judaism, which as you’ve said several times in talks and articles, is where you finally found a sense of belonging, with the Jewish community of color. Is that informed by the period of isolation, aloneness, not belonging that does dominate this book?

Completely. Because I wanted the book to be focused on five specific years, we all have core trauma in our lives and for me this was it. There was no room for the editorializing of the adult self. If I had room for an adult narrator’s commentary, I would have said, “Now here is where I developed my faith in Judaism and here is where I found my kinship with the religion.”

When the book was finalized, I realized I forgot to put “The Diary of Anne Frank” in there. I think it was because I was concerned that there was so much darkness and trauma already, I wanted to use the books that I was reading at the time (like “Sweet Valley Twins”) as a block of levity

But “The Diary of Anne Frank” was the first time I saw a something of a mirror of my life, not because I had gone through something as horrific as the Holocaust, but because she was also a girl coming of age in hiding and yet still espousing these universal dreams and wants and desires of a little girl. I read her words and I was like, “Wow — there was someone like me under very different circumstances.” That made me feel like not so much of a monster or weirdo, and that there was not so much to be ashamed of.

So many negative experiences of people of color are dismissed as suggestions that it’s “our time” to go through adversity, such as “The Irish went through it, then the Italians. Now it’s the turn of the Blacks, Asians and Hispanics.” Jews are often thrown into this mix as having served their turn. What’s wrong with that thinking?

First of all, it’s not a turn, especially with regard to Black Americans. It’s been forever. Secondly, I don’t think we should be taking the view, “Oh, suffering; that’s fine. It’ll be over soon. We don’t need to do anything about it.”

Certainly, we as the Jewish people cannot take that stance, because we saw what happened when it was the Jews’ turn. And we are called upon as a people to stand up and stop it whenever it arises, regardless of whoever it is happening to. And it just so happens it’s been happening to Black Americans and people of color as long as we have had history and time and people.

I visited the Forward’s offices on the Lower East Side this summer and also explored Chinatown, so the places you wrote about were very visual to me, such as the courthouses and some of the very shops you mentioned. Everything looks normal as part of an urban landscape, yet you’re describing running around by yourself as a 7-, 8-, 9-year-old. Is there a Qian Julie walking around there right now?

Yes, definitely. I see her all the time. It’s heartwarming and heartbreaking to see that. There are times I’m walking to work and I see immigrants picking through the trash. In my work, I see immigrant children facing some of the same barriers that I did decades ago. It makes me feel incredibly frustrated but I see it anew because of this book; how much inner strength and light they have.

Every time I come into contact with one of those little girls or boys, I feel that our job as adults is to keep the world from dampening the light. I’m just grateful for the experience of writing this book to help me transform that relationship to both my inner child and every immigrant child I come upon.