‘A guy can be both’: Black and Jewish Like Jesus and Me 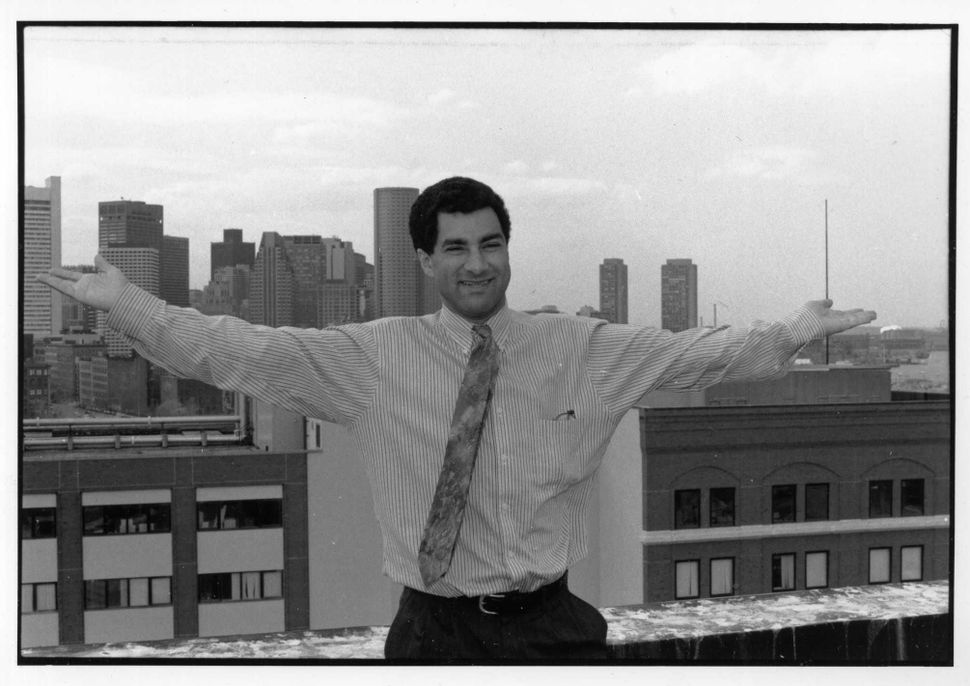 Editor’s Note: This is an adapted version of an essay originally published in the 1997 book “Multi-America: Essays on Cultural Wars and Cultural Piece,” edited by Ishmael Reed. We are republishing it now, as the author, Robin Washington, joins the Forward as Editor-at-Large. While some circumstances and facts may have changed — such as the population estimate of Black Jews — the essay remains prescient and relevant today.

In the mid-20th century novel and later movie, “The Apprenticeship of Duddy Kravitz,” Virgil Roseboro, speaking to the title character, rattles off a list of famous people who, like him, have epilepsy: Julius Caesar, Jesus Christ, Dostoevsky, Charlie Chaplin.

“A guy can be both, you know,” Roseboro responds.

For all the hand-wringing over the conflicts between Blacks and Jews, it is amazing that none of the great minds expending so much gray matter on the subject has ever stopped to consider what you could call Roseboro’s Axiom: When speaking of two non-mutually exclusive groups, remember that a guy can be both.

Epilepsy aside, everyone knows Jesus was also a Jew. And no self-respecting Afrocentric this side of J.A. Rogers, the chronicler of all sorts of people you didn’t know were Black, would let go of the one-drop rule for Christ’s sake.

So the next time you let go a “funny-he-doesn’t-look-Jewish” guffaw while watching a rerun of In Living Color’s “Menachem! I’ve just met a boy named Menachem!” skit, remember: The savior of the Christian world suggests otherwise.

Yet does Jesus say anything about the complexion of the United States today, in 1997? Sure, there was Sammy Davis, Jr., but many Jews struggle to name other Black Jews. Frequently, I find, they they stumble at the postulation that in almost every Reform or Conservative synagogue, there is at least one Black Jew.

“Not at my shul,” one matronly congregant of a large Boston synagogue told me. “We do have one interracial couple, but the husband didn’t convert.”

“Do they have children?” I ask her.

“They have a boy and a girl. But what does that mean?”

“It means your congregation has two Black Jews.”

Those two are among some 200,000 in the United States, or about 3% of all American Jews. Sources for this estimate include a 1990 Council of Jewish Federations survey which suggests there may be more than 250,000 self-described Black Jews in a broad definition of “who is a Jew” and 120,000 in a stricter analysis.

And so defines me. Black Jew, Jewish African American, African American Jew, American Jew of African descent; put the adjective where you wish. It still comes out the same. No, I’m not from Ethiopia, I’m not in a cult and I didn’t convert. But what difference would it make if I had?

Although most of us find it insulting to be asked how we became Jewish — our lighter-skinned brothers and sisters rarely face such an inquisition — we are happy to share our heritage as we belatedly join as a community celebrating the Black Jewish experience in America.

That experience includes, like myself, the children of Black and Jewish parents, the legacy of the oft-referred-to better times between the groups. We are also the living testament of a 1970s survey that found Blacks as the likeliest spouses of Jews who married inter-religiously and Jews the usual choices of Blacks who married interracially.

Then there are Black converts to Judaism, who, despite quiet disclaimers that “they aren’t real Jews” are indeed so according to halacha, Jewish law.

There are also several thousand members of the Ethiopian Hebrew Congregations, who despite their name are not East Africans but very American and a very religiously observant group that originated half a century before the Black Muslims in the United States.

There are other Black groups further removed from halachic Judaism, including the Hebrew Israelites, the Black Hebrews and the followers of Yahweh ben Yahweh, and others too numerous to name. Some, formed just decades after slavery, still worship Jesus or include his name in their official titles.

Mainstream Judaism has been less than keen on accepting the latter groups as true Jews, but that’s beside the point: Not all have asked for that acceptance or even have a use for it. And not all call themselves “Jews,” either, drawing distinctions between Jews, Israelites, Hebrews and other lost tribes. The old adage of Judaism in general clearly applies to those who are Black: Put two on a desert island and you get three congregations.

As a child of a Black and Jewish couple of the 1950s, who’s going to question my identity? Because my father was Black, I am, by every law of race in this country, definitely Black. And because my mother is Jewish, I am, like Jesus, Fiorella LaGuardia, and Karl and Groucho Marx, halachically Jewish. Belonging to a Conservative shul, keeping kosher, and knowing prayers by memory rather than writ doesn’t make me any more or less so than anyone else.

As a Black Jew, even a halachic one, I probably have as much in common with the Yahweh ben Yahweh folk as I do with my Lubavitch brothers and sisters. Basically, I’m down with both and not interested in anyone who would dis either of them.

Which brings up the question of what Black Jews think about Black/Jewish relations. Some time ago, I conducted an informal survey of light-skinned American Jews of various European backgrounds, and African Americans who were not Jewish. To the Jewish respondents, I asked, “Do you consider yourselves white?” and, “Do you believe there is such a thing as Black antisemitism?”

Most Jews who considered themselves white said there was no widespread problem of Black antisemitism because Blacks who hated them did so because they hated all white people. Jews who thought of themselves as something other than white, however, concluded if Blacks hated them, it was precisely because they are Jews.

The few Blacks who made the distinction of Jews as a separate group showed admiration, at least begrudgingly, for them, as in “We should do like the Jews do.” Most made little distinction and echoed James Baldwin’s assessment of Black attitudes toward Jews as “a different type of white person who goes to church on Saturday instead of Sunday.”

As a Jew of color, however, I’ve often wondered where Jews who think of themselves as white ever came up with that notion. Although they are correct in their assessment of Black America’s perception of them, they surely cannot believe for a minute that white America thinks of them as members of their club. Go ask any bellboy.

With no end of hype to the “Black/Jewish relations question,” I suspect those attitudes have changed. Yet for most Blacks today, Jews are not an issue, and even less of an issue than they were 30 years ago, when Black and Jewish neighborhoods were concentric or abutted each other. Taking far more prominence in Black life today are keeping our children alive and finding some kind of job without being backlashed by an angry white male, not necessarily Jewish. For most Blacks, Jews simply don’t enter into the picture as much as they once did.

So, too, are Jews in suburban enclaves isolated from the reality and concerns of Blacks in the inner city. Given the great misperceptions among Blacks and Jews about each other and even themselves, it is hardly surprising that they don’t see Minister Louis Farrakhan through the same lens.

I am at once amused and annoyed to find that what has been obvious to me since the age of childhood color-consciousness is suddenly enlightening the high-powered intellectuals of both sides of my heritage. “How white are Jews of European descent in America?” asks Cornel West on a book tour with Michael Lerner. “And if they don’t perceive themselves as white, how do they engage in a dialogue with Black brothers and sisters, who often have been seeing you as white all along?”

Jews who have a more realistic — and, I suggest, healthier — self-identity as something other than white must recognize that Blacks don’t necessarily see it that way. Yet the recognition by both groups that Blacks may sometimes be Jews and Jews may be Black may do wonders for the self-image of each group.

Celebrate Jewry, my people, and know that you are celebrating the shtetl as well as the slave shack; that you are Europe and Asia and you are Africa and South America; that you are white, yellow, red, brown, black in every corner of the world.

Be proud in Blackness, my brothers and sisters, and know that you are beautiful as Christians and Muslims, as Jews and Hebrews and Israelites, Rastafarians, Buddhists and Animists of a power, powerfully believing people.

All this is not to suggest that Black Jews are at once the magic bullet to return to the land of kumbaya and we shall overcome, someday, someday. Or the hopeful phone calls received ad infinitum in my office at Boston’s Black newspaper, the Bay State Banner, such as:

“Well, Mr. Washington. I’m calling from the Black-Jewish Improved Relations Society. And we’re sponsoring an event that we think will greatly affect our community.”

“Really? Which community is that?”

“Oh, good. Well, what we’re doing is really exciting. We’re bringing an Ethiopian Jew here to serve as a bridge between the Black and Jewish communities in Boston!”

“Uh, OK, I guess.. But they might ask him about the Hah-vud bridge. Does he understand Boston English?

The lesson of Black Jews in America is that we are a part of both worlds and full members of each. We are not the internally torn souls of so many tragic mulatto movie characters, forever at conflict with ourselves, but we do feel the joy and pain, the love and hurt that defines Blackness and Jewishness in America. And though we do not have the answers to “Can’t we all get along here?’’ — who does? — as Jews, as African Americans, we certainly understand the question.

This essay is adapted from the 1997 book “Multi-America: Essays on Cultural Wars and Cultural Peace,” when the author, Robin Washington, was managing editor of the Bay State Banner. The Black-Jewish population estimate in the article came from the Alliance of Black Jews, which Washington helped found in 1995. Current estimates are that Jews of Color — including Black, Asian, Hispanic and Native American Jews — comprise up to 15% of the nearly 7 million Jews in the United States.

‘A guy can be both’: Black and Jewish Like Jesus and Me