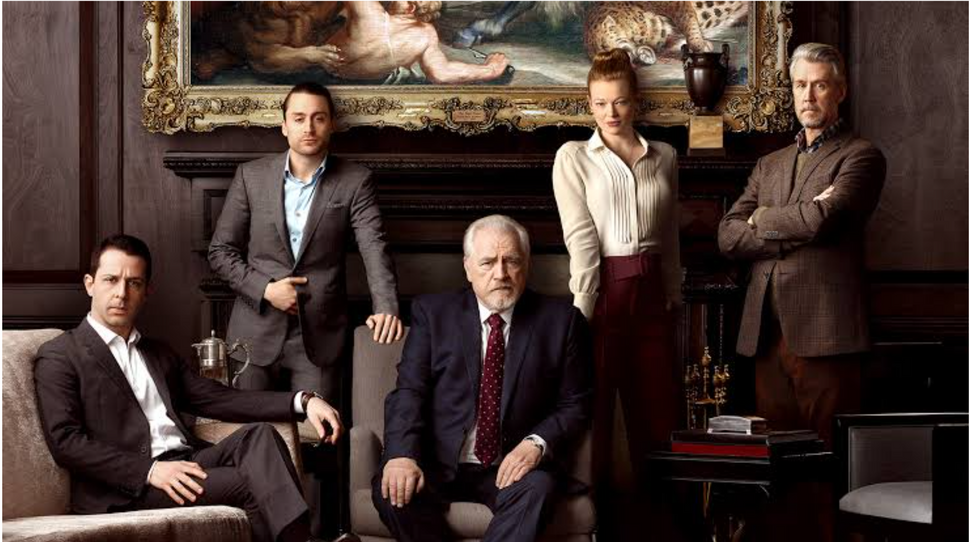 The cast of HBO’s ‘Succession’ Courtesy of HBO

This was the question my family debated after the fourth episode of “Succession.” As even those who have not watched it probably know, HBO’s smash series has begun its third season. The series portrays the politics and passions of the ultra-rich Roy clan, a family whose dysfunctional ways make the Karamazovs seem straight out of Mayberry.

All of which brings us to the loaded book.

The third season of the series fastens on the fallout from the bitter dispute between the family patriarch, Logan Roy, and his son Kendall over the fate of Waystar, the family’s media and entertainment empire. When Logan, aged and ailing, refuses to move aside for Kendall, who had believed his succession was imminent, the company’s fortunes begin to shudder and shake. While the other Roy siblings, their relationships warped by distrust and fear, nervously make and unmake alliances, the company shareholders become equally nervous.

Perhaps none more so than Josh Aaronson, who makes his first appearance in the fourth episode. Played by Adrien Brody, Aaronson is a 40-something billionaire investor who, thanks to his stock holdings, can make or break the rule of the Roys.

When the family feud begins to threaten his portfolio, Aaronson, intent on assessing his assets, invites Logan and Kendall to pay him a call at his own island. Though they have refused to see one another since Kendall revealed the sordid practices of the empire’s cruise line, this is an offer they know cannot be refused.

When Kendall walks into the island’s mind-boggling yet somehow modest mansion, Aaronson is seated in his glass-walled living room. His long hair slightly disheveled and his layered clothes slightly wrinkled, Aaronson looks up from a paperback. He quickly closes and puts aside the book, allowing us to glimpse the design of the back cover, where sharp white lines shoot through blocks of black.

This was even better than Chekhov’s gun, I thought. It was Camus’ gun! The front and back covers to Vintage’s recent line of his novels and essays are variations on this same black and white theme: jagged black and white angles and rectangles. Was it “The Stranger?” “The Myth of Sisyphus?” Even “The Fall?” The hermeneutic possibilities were endless!

While my wife nodded her head, our teenager, scrolling on their iPhone, triumphantly announced that, yes, it was a Vintage paperback. But rather than a Camus, it was instead a Dostoevsky. Namely, “Crime and Punishment.”

I was disappointed, but not defeated. This, too, has interpretive possibilities. There is the obvious one of, well, crime and punishment. The novel’s protagonist, Raskolnikov, is a law student mired as much in material poverty as in intellectual misconceptions of greatness.

Convinced that it is the mark of a superior human being to kill his inferiors, Raskolnikov murders an old woman who lends money at exorbitant rates. Punished by his conscience, Raskolnikov confesses his crime and is punished with imprisonment. He discovers, however, that true rehabilitation can begin only with God. With the tease that this “might be the subject of a new tale,” Dostoevsky ends this tale.

The parallels are obvious. Not only has Logan Roy’s cruise line committed crimes that led to the loss of life, but his media outlets, not unlike Fox, cash in royally on the hounding and tormenting of public and private individuals.

Moreover, when Kendall, unable to shake off his crack addiction, steers a car into a lake while in a cocaine haze, he kills another passenger. The accident, kept under wraps by Logan, nevertheless weighs on Kendall, though not to the degree the premeditated act of killing weighs upon Raskolnikov. At least, not yet.

But these parallels might be too obvious. Would the show’s gifted writers drop this visual hint so subtly only to make a sophomoric point?

Or maybe they’re making a racist point instead?

It happens that Aaronson is Jewish — a fact made obvious by the mezuzah on the front door frame. The viewer who misses that might not miss the string of scarcely veiled antisemitic remarks that Logan cracks during the meeting. When not urging Aaronson to “back me, sit tight, count all your gold in your castle right here,” Logan joshes him during a walk across the island’s sand dunes: “Oh, city boy, are you? You’re a bit far from your coffee and bagel.”

With growing consternation over Logan’s weakened condition, Aaronson keeps calling for a car to meet them. Before it arrives, however, Logan finally buckles and bends toward the ground from heat prostration while Aronson and Kendall rush to help him.

It happens that there is just one Jewish character in “Crime and Punishment.” Dubbed “Achilles” because of the helmet worn by Russian fire wardens, we learn he is Jewish the same way we learn Aaronson is Jewish: through another’s jaundiced eye. “The man’s face bore that timeless look of distaste and dejection which has etched its acid mark on the face of every last member of the Jewish race.” It is this same face that, with growing horror, watches helplessly as one of the novel’s more wretched characters, Svidrigailov, puts a gun to his own head and pulls the trigger.

Why a Jewish witness to this suicide? It is no secret that Dostoevsky, despite his genius, held Jews in low esteem. While mostly absent in his fiction, they are referred to as “Yids” in his letters and diaries. As his biographer Joseph Frank writes, Dostoevsky, a political reactionary and devout Christian, was horrified by Russia’s burgeoning industrialization and commercialization. He pinned the blame on big-city financiers whom he described as “this crowd of triumphant Jews and kikes that has thrown itself on Russia.”

He might as well have added that they, too, were counting their gold in castles. Where, though, does this leave Josh Aaronson in the greater scheme of “Succession?” Like Achilles, he seems to play a cameo role. According to Brody, he has not been tapped for any other episode.

Like Achilles, as well, he is mostly an observer, as uncertain over what to do as is the fire warden. Moreover, just as we know nothing else about Achilles, so too are we in the dark about Aaronson. Though we might wish to think of him as a mensch, he seems as indifferent to the human misery Waystar has caused as Logan Roy. Instead, his overriding concern is his portfolio’s value.

And so, here’s the question that the rest of season three of “Succession” will need to answer: when will the book go off and who will be in its line of fire?