Do we seriously need ugly sweater-themed cookie kits for Hanukkah? 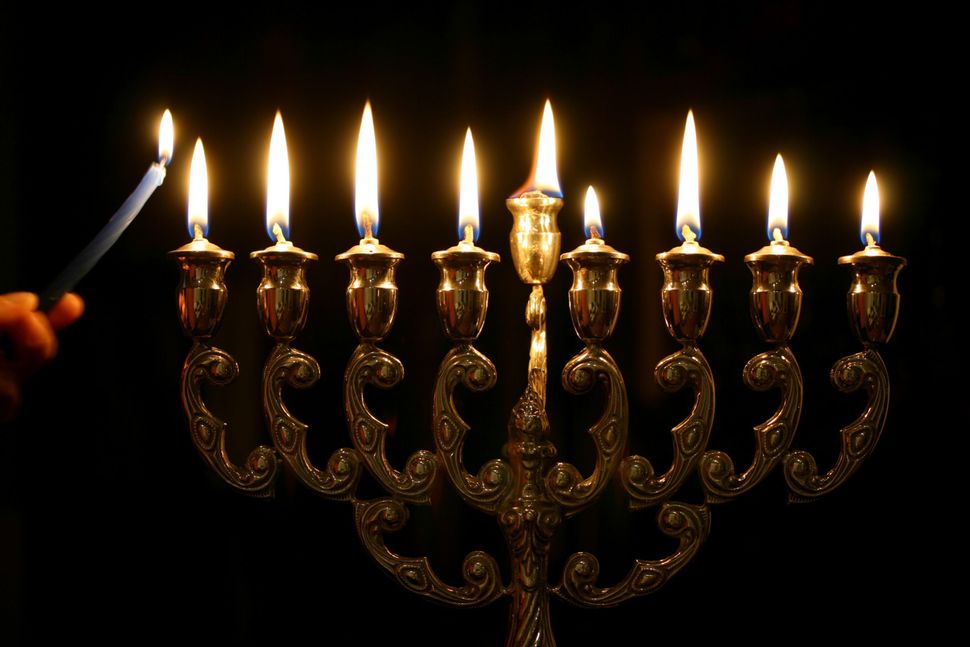 Lighting the menorah Image by iStock

Just in time for Hanukkah, Manischewitz has debuted two new twists on what it claims is a festive tradition: Hanukkah-themed — wait for it — sugar cookies.

The new kits, including one that is ugly sweater-themed, join the company’s longstanding Hanukkah dessert line, which also includes donut mix and do-it-yourself Chanukah Houses — because everyone remembers that famous story of how the, erm, sugar cookies lasted eight days, right?

Do these desserts really constitute a festive tradition? Or are they just one more example of the Christmasification of Hanukkah? Are edible ugly sweaters kosher as long as they are blue and white rather than red and green?

Sugar cookies and gingerbread houses — the dessert off of which the Chanukah Houses are clearly modeled — are traditionally associated with Christmas. Sugar cookies were created by the Moravians, Protestants who moved from Germany to Nazareth in the 1700s, and while gingerbread houses didn’t originate as a Christmas tradition, they were strongly associated with Christmas by the early 19th century. Manischewitz chief marketing officer Shani Seidman said in an interview that the company’s Hanukkah cookie kits are “phenomenally” popular. The company sold its entire stock of do-it-yourself Hanukkah houses to supermarkets more than a week before the beginning of Hanukkah on Nov. 28, she said.

“Although these are not necessarily the products that were around 100 years ago, when someone walks into a supermarket, and they’re looking for products for the Hanukkah season, Manischewitz will be there to offer products that consumers really want and they can enjoy,” Seidman said.

Reached through Twitter, Maine resident Emily Miller said that the Chanukah House reminded her of Mensch on a Bench, a Jewish twist on the modern Christmas tradition of the Elf on a Shelf. “They’re both things created allegedly for Jewish people to sort of ‘ease the pain’ of not fitting into cultural Christian hegemony,” she said.

The “watering down” of Hanukkah is particularly offensive, Miller said, given the history of the holiday, which celebrates the Maccabees, who rebelled against the Hellenistic influence on Jewish life.

“Using Christian trappings for any Jewish holiday — but especially this one — just flies in the face of the entire reason we’re celebrating,” she said.

And there are Christian trappings aplenty, like blue-and-silver tinsel wreaths, that have emerged to cater to the apparently existent Chrismukkah-observing customer base.

Marketing silly, Christmas-adjacent Hanukkah products to Jews is about more than just trying to assimilate us into a Christian-dominant culture. It’s also about trying to assimilate us into a lifestyle that celebrates throwing money at things that aren’t healthy, harm the environment, and will probably end up in some basement corner with other discarded knick-knacks. That lifestyle is, in its own way, just as harmful and antithetical to a Jewish ethos — which emphasizes introspection and doing good, not materialism — as trying to treat Hanukkah as a Jewish Christmas. And many Christians would probably say it’s antithetical to their ethos as well.

Seriously, though, a sugar cookie mini sukkah for Sukkot would work. People who are not able to build a real one can build this as a substitute & decorate it with candies shaped like the proper greenery & then get a tiny lulav & citron! It would be so cute!

Then again — maybe a cookie is just a cookie. Reached through Instagram, entrepreneur Hadass Eviatar said that while she’s not a fan of the trend of Hanukkah becoming increasingly Christmas-ified, she does appreciate desserts, like the Manischewitz Chanukah House, that meet her kosher standards.

“It was a fun activity and it was nice to find a hechshered gingerbread house to play with,” Eviatar said. But, she said, that’s all it is.

Do we seriously need ugly sweater-themed cookie kits for Hanukkah?