The Real Life Mensch Behind Mensch on a Bench 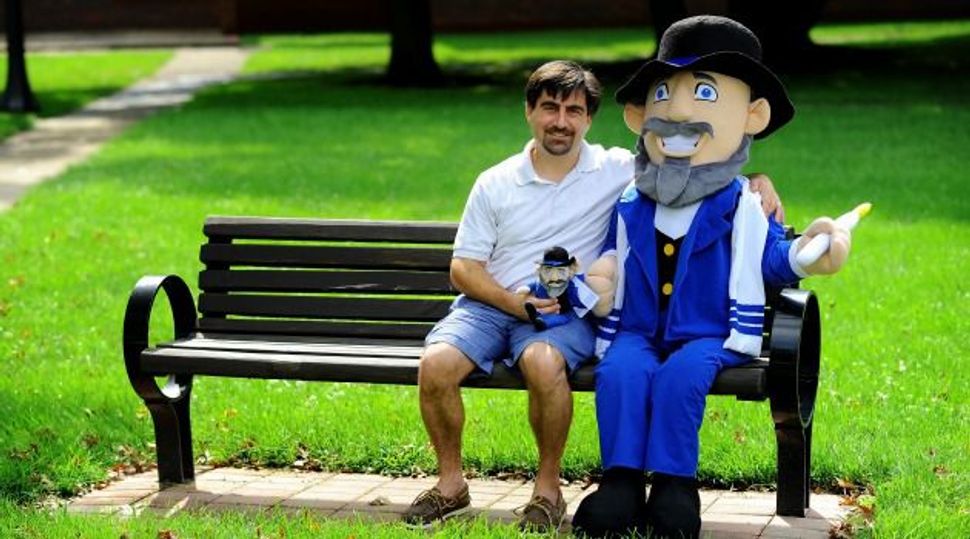 On his first day of MBA classes at the University of Virginia, Neal Hoffman called Hasbro Toys and offered to work for them without pay. That call led to six years of working at Hasbro’s marketing department on G.I. Joe, Tonka Toys and Chuck & Friends. A self-described, “big kid at heart,” Hoffman early on decided he wanted to work with toys or comic books, and so it was no surprise to those who knew him that he was behind The Mensch on a Bench, one of last year’s most talked about toys for Hanukkah.

The plush toy and accompanying book tells the story of Moshe, the friendly and helpful mensch, who helped the Maccabees by sitting and watching over the oil as it burned for eight full days and nights.

Three years ago, Hoffman, 37, left his job at Hasbro when his wife Erin was promoted to a job and along with their two boys, Jacob and Alexander, the family relocated to Cincinnati. While walking through a department store two years ago, Hoffman’s son, ironically named Jacob Maccabee Hoffman, asked for The Elf on a Shelf, Hoffman replied, “Jews don’t do elves on shelves, we do mensches on benches,” and thus the idea was born.

Hoffman went home, wrote the book, trademarked the name and started working on a prototype. In March of 2013 he took to the crowd-funding website, Kickstarter, and he raised $22,000. He launched sales in October and sold out of the thousand produced units of The Mensch in just ten days, gaining much social media attention along the way.

That spotlight has led to Hoffman’s upcoming appearance on a December 12 episode of ABC’s Shark Tank in the hopes of striking a deal with one of the sharks.

Hoffman, a native of Marble Head, Massachusetts, spoke to the Forward’s Maia Efrem about Moshe’s future, starting new traditions and the Christmas-Hanukkah competition.

Maia Efrem: What did you learn at Hasbro that helped with The Mensch on a Bench?

Neal Hoffman: I learned how to look for the consumer insight. Toys are a tough category. There’s always something coming in, so to tug on someone’s heartstrings and core desire is always what you need. For Mensch, I found that this was an unmet need within our interfaith Jewish household, and it was going to be fun to play with. That was key. The other important idea was the name. I thought, “That’s a cute name!” Moshe was a mensch, because he was watching the candles. That’s where the idea originated.

How much money did you think you would raise on Kickstarter? Was the $22,000 a surprise?

That was the hardest I have worked in my entire life. There were not many Jewish people on Kickstarter who were searching for Jewish items for Hanukkah. Every person who donated was someone I specifically brought in. It was not a surprise that some people would not pay any attention to me in April. Then suddenly in November and December, this became the best idea they had ever heard. I was not surprised we raised that much money, but I definitely worked to get it.

What were some difficulties in getting The Mensch on a Bench off the ground?

I had requested from the factory that the books be of the same quality as Doctor Seuss books. They came back as unfinished cardboard books, which fell apart when you opened them. Five days before they were to be shipped, I was reprinting them and hired people to replace every book in every box. It cost us $8,000 to do that. But if I’m going to do something, I’m going to do the best that I can. No one complained about the books after that. We spent our own money, and it was the best decision we could have made. We run this company like mensches would; whenever we are given a choice, we always do the right thing. You have to be a mensch in real life.

The whole experience has involved calling in favors from friends and family. Someone I once worked with at Hasbro designs my packaging. My website is run by a friend of mine. I was able to sell Mensch on a Bench to Target Toys, because someone in business school made an introduction for me. I’ve been able to build a positive community from the beginning.

Did you have any problems marketing and advertising Moshe?

I’m very sensitive to stereotypes; I wanted Moshe to be noticeably Jewish but not stereotypically Jewish. I made the manufacturer rebuild Moshe’s nose five different times. I was super-sensitive to all of that. When I sold Mensch to Target, they loved it. But while we were in the final walk-through, somebody that reviews their Hanukkah products on their business council said they thought the Mensch was stereotypical and offensive. I went back to Target with a list of rabbis, Jewish federations, and Jewish journals that have all come out in support of The Mensch on a Bench. After I sent them that list, they reversed their decision and decided to take the product. That was one of my proudest moments. From a business model standpoint, I’m still a guy doing this in my home. I’m still self-publishing my books and learning my way.

What is the future of Mensch?

The AfikoMensch book [for Passover] is written and illustrated, and it is being colored in right now. For the short term, this is another reason for people to bring out their Mensches. For me, right now, this is becoming a book series. In my mind we can have one mensch for Passover, one for Purim, and one for Yom Kippur in which Moshe is teaching a lesson about forgiveness. The idea is that you can bring the same Mensch out on all the different holidays.

Tell me a little about your Jewish background.

I’m pretty Jewish. We grew up as Conservative Jews, living in a fairly Jewish area. I went to Hebrew school, Hebrew summer camp, Jewish overnight camp, and Hebrew high school. Looking at everyone in my family, I’m probably the most religious among us. That’s why it was so shocking that I married someone who wasn’t Jewish. But you can’t help who you fall in love with. There’s an unbroken Jewish chain that has been going on for five thousand years. To me, being a Jewish father is really important, and Jewish traditions are very important.

Do you think this will help with the feelings that Hanukkah just doesn’t stack up to Christmas each year?

Someone said, “I don’t like that we’re knocking off a Christmas-based product.” I responded that the whole idea of Hanukkah being a big holiday is because of Christmas. I don’t think we’ve come up with the whole solution, but we’ve leveled the playing field somewhat to make it easier to solve the problem. All I can do is give Jewish parents a tool to do that. This is just a way to bring a little bit of Judaism into your house.

The Real Life Mensch Behind Mensch on a Bench