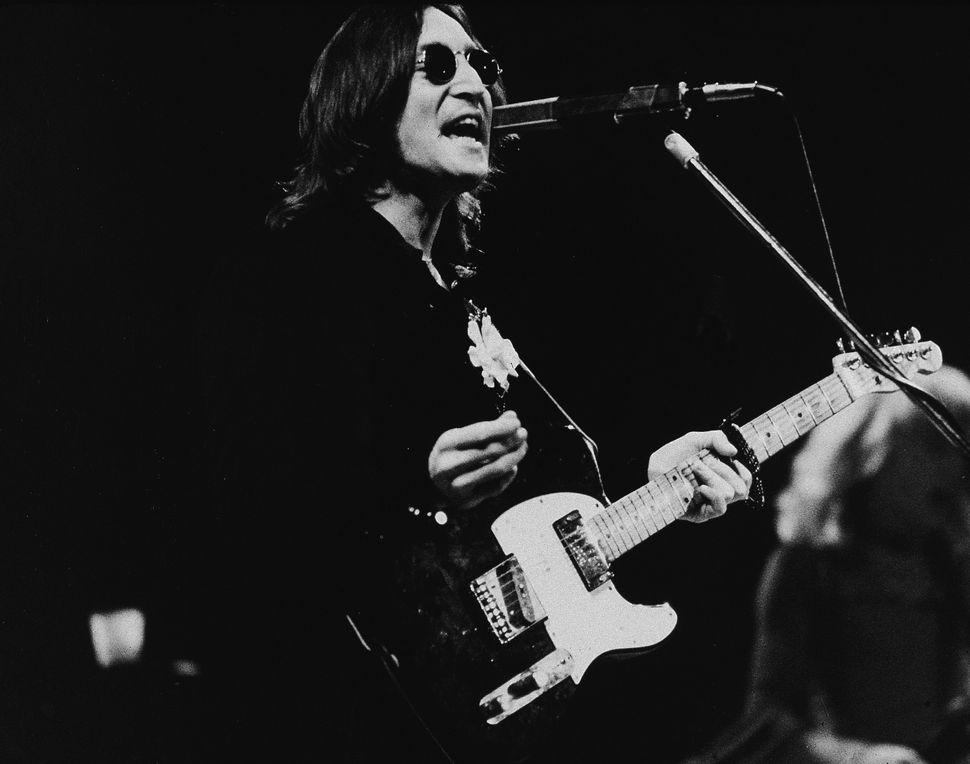 Editor’s note: On this day in 1980. John Lennon was murdered in New York. Today, we are republishing this article that originally appeared on our site on Dec. 8, 2021.

Had he not been gunned down on Dec. 8, 1980 by a deranged “fan” lying in wait for him outside of his Upper West Side residence in Manhattan, John Lennon may well have been a well-preserved 82 years old this month, still happily married to Yoko Ono and living in the Dakota. The ostensible founder and leader of the Beatles, the most beloved critically and commercially successful band of the rock era, Lennon left behind a complicated legacy befitting his complicated, mercurial and at times tormented personality.

While Lennon was known to make Jewish jokes on occasion — often as part of his relentless if well-intentioned teasing of Beatles’ manager Brian Epstein — he was an equal-opportunity offender, and didn’t have it in for Jews any more than for any other group that attracted his attention and thereby became the subject of his rapier, if at times cruel, wit.

The number of Jews who played serious roles in the Beatles’ career, both creatively and behind the scenes, was rather remarkable, beginning with Epstein himself, who discovered the Fab Four playing in the dank, underground Cavern Club in Liverpool and steered them on their way to becoming the socio-cultural phenomenon that transcended music and became nearly synonymous with “the Sixties.”

Other key Jewish players included New York City radio personality Murray “The K” Kaufman; “Cousin” Bruce Morrow, the New York city radio host who introduced the Beatles at the Shea Stadium concert promoted by Sid Bernstein; and filmmaker Richard Lester, the visionary behind the camera who helped shape the Beatles’ image through his direction of the musical comedy films “A Hard Day’s Night” and “Help!” Even their hair stylist, Leslie Cavendish, late of Vidal Sassoon’s studio, was Jewish. Their early hits included many written by Jewish songwriters, among them “Chains” by Carole King and Gerry Goffin; “Baby It’s You” by Burt Bacharach; “Twist and Shout” by Bert Berns; and “Kansas City” by Jerry Leiber and Mike Stoller.

After Epstein died in 1967, Lennon brought in the controversial Allen Klein to be the group’s business manager — a move opposed by his bandmate Paul McCartney, who favored Lee Eastman (born Leopold Vail Epstein) and his son, John, who were father and brother, respectively to McCartney’s then-girlfriend and soon-to-be-wife Linda Eastman. Lennon also worked with legendary Jewish record producer Phil Spector on the Beatles’ “Let It Be” album and on several of Lennon’s post-Beatles solo albums. Whatever feelings Lennon may have harbored about Jews in the abstract, he was clearly quite comfortable working with individual members of the tribe.

Which may be why, in a curious, little-known episode in 1969, Lennon wound up singing in Hebrew as part of a radio broadcast for Voice of Israel.

Israeli freelance journalist Akiva Nof happened to be in Amsterdam at the same time that Lennon and Yoko Ono were performing one of their “Bed-Ins for Peace” at the Amsterdam Hilton Hotel. Not only did Nof score an interview with the world’s most famous couple — he was even invited to join them in bed.

With his tape recorder running, Nof asked Lennon if he knew any Israeli songs. Lennon replied, “Only ‘Hava Nagilah,” and then sang a few lines from the song. Nof then asked Lennon to sing another song “for the Israeli audience,” and Lennon launched into an as-yet-unreleased Beatles number, accompanying himself on guitar and singing, “I want you, I want you so bad, babe,” tailoring the phrase with the end tag, “Hello Israel.” The tune later surfaced on the group’s final studio album, “Abbey Road,” called “I Want You (She’s So Heavy)” — minus the reference to Israel.

But Lennon and Nof weren’t yet done with their Hebrew jam session. Nof boldly if not brashly asked Lennon, “Would you be able to, if I give you some words in Hebrew…” to which Lennon responded with a resounding, “Yes, yes!” Lennon then launched into Nof’s “Oath for Jerusalem,” singing the Hebrew lyrics (which Nof had transliterated for him) quite confidently, with Yoko Ono singing backup. The lyrics Lennon sang meant, “Jerusalem, we all swear, that we will never abandon you, from now until forever.” It’s not known if Lennon knew the meaning of the Hebrew words he was singing.

John Lennon once reportedly said, “Show business is an extension of the Jewish religion.” Apparently, he was just fine with playing his part.