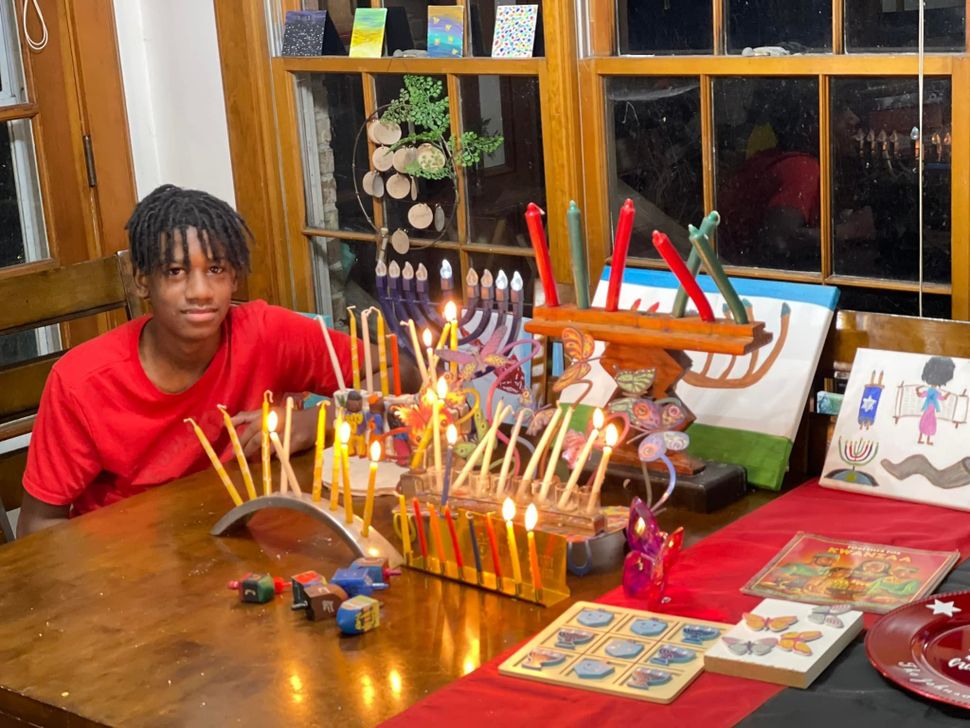 Hanukkah menoras and a kinara adorn the home of Tarece Johnson in Lawrenceville, Ga. Johnson and her family participated in the online Kwanzakkah celebration held by the Black Jewish Liberation Collective on Dec. 5 celebrating both Hanukkah and Kwanzaa.

For Carol Valoris, the holiday season used to evoke mixed feelings. As a white Jewish mother of two Black Jewish daughters, she described seeing her family zigzagging between Hanukkah and Kwanzaa. No matter which holiday the family was observing, she said, someone was always left out.

On Dec. 5, however, Valoris and her family participated joyfully, and fully, in a virtual “Kwanzakkah” celebration sponsored by the Black Jewish Liberation Collective, an organization of Black Jewish social justice activists formerly known as Black Yids Matter. 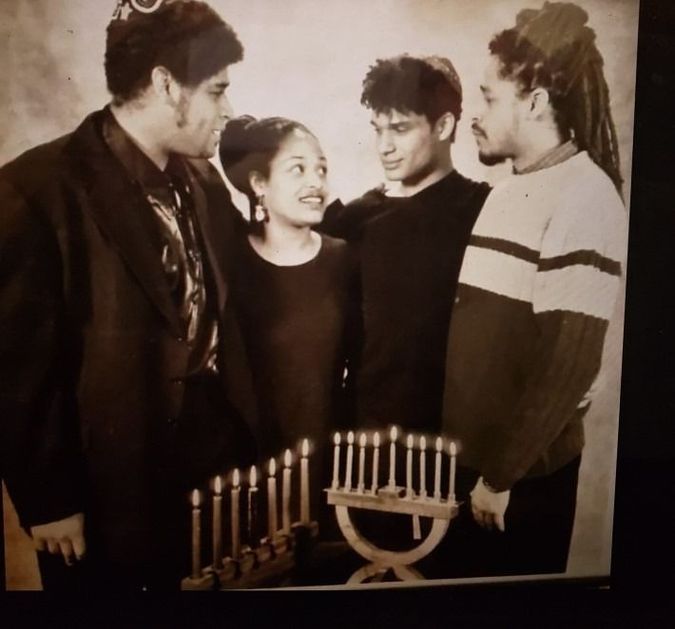 Members of the McKinney family (from left) siblings Jason, Shahanna, Adam and David, display their menorah and kinara while celebrating Hanukkah and Kwanzaa in Milwaukee in 1999. The Black Jewish Liberation Collective held a similar Kwanzakkah celebration online on Dec. 5.

Black Jewish diversity consultant Tarece Johnson applauded the event as a chance for Black Jews to bring their whole selves, “just being courageous in our space.”

About 25 Black Jews and their relatives and allies logged into the virtual holiday observance, which blended the rituals of the eight-day Jewish festival of light with those of Kwanzaa, a weeklong holiday observed from Dec. 26 to Jan. 1.

At this year’s BJLC celebration, one by one, Kwanzakkah participants unmuted to talk about how the principles resonated with them and ways they were trying to implement each one in their lives.

They also practiced rituals familiar to celebrants of both holidays, lighting both Hanukkah menorah and kinaras, the wooden seven-flame candelabra of Kwanzaa. A candle is lit each night of Kwanzaa to signify its principles.

As related in a Forward article in 2016, to prepare for that first festive night in 1966, the kinara was created when Karenga searched for a candleholder with seven holes but couldn’t find one.

“Unable to find a seven-hole candleholder in the Los Angeles area,” the article quoted historian Peniel Joseph writing in “The Black Power Movement,” Karenga “used a nine-hole Jewish menorah and broke off two of the openings.”

The BJLC’s Kwanzakkah opened with a ceremonial pouring of libations. Participants poured water into house plants as they read, “We call upon the ancestors to join us for our celebration and lift our hearts and our voices for joy and unity. We call upon Sarah, Rachel, Leah, Rivkah, Yocheved, and Ruth, Abraham, Isaac, Jacob, and Joseph, Nat Turner, Harriet Tubman, Audre Lorde, Nina Simone, Prince, and Sammy Davis Jr.”

BJLC has sponsored Kwanzakkah annually for four years, initially in person in New York, but the event went virtual with the onset of the COVID-19 pandemic last year.

It makes sense to blend the observance of the two holidays, said Shoshana Brown, an organizer with BJLC. Kwanzaa and Hanukkah both represent traditional ideas related to perseverance, community identity, and overcoming oppressions, she said.

Erica Riddick of Cincinnati expressed those themes through a “hot kitchen cam” live video of her preparing African soul fried rice, with red, black, yellow and green components representing the colors of the Pan-African flag. The recipe was courtesy of Black and Jewish chef and culinary historian Michael Twitty.

“I have never really celebrated Kwanzaa before, but when Kwanzaakuh came along, I was all in,” said Riddick, 50, adding that she appreciated the opportunity to celebrate all parts of her identity.

“I think largely no one has ever questioned my right to celebrate Kwanzaa because there is an undeniable sense that it’s associated with Blackness, but there is a sense that my Blackness causes my Jewishness to be questioned.