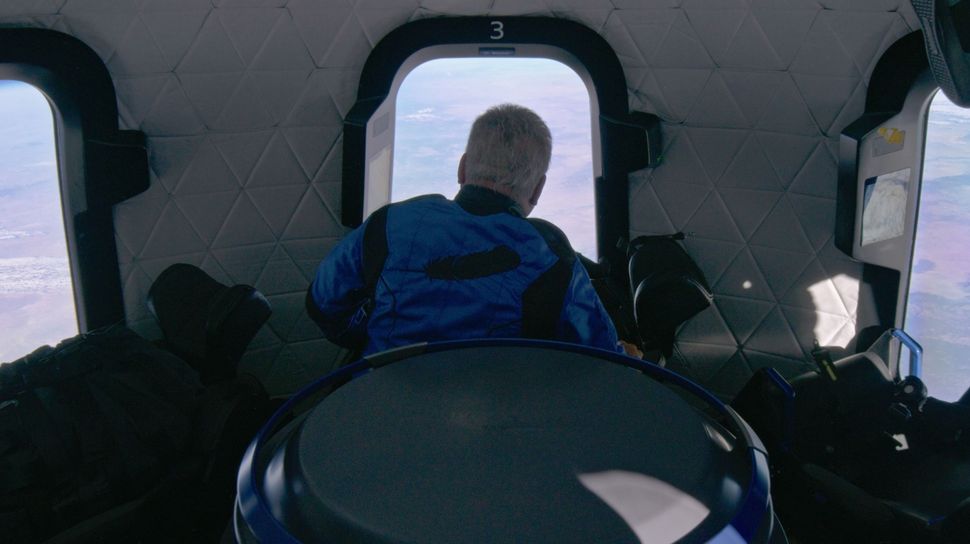 If there is something vaguely sinister about launching a beloved 90-year-old actor into space on very phallic rocket to distract the world from an egregious pattern of alleged labor rights abuses, making a one-hour corporate propaganda film about the initiative for your own streaming platform does little to convince us otherwise. But I commend Amazon and Jeff Bezos for the effort.

In Amazon Prime’s “Shatner in Space,” which documents William Shatner’s voyage on the Blue Shepard rocket earlier this year, we receive ample assurances that we misunderstand Bezos’ mission. After situating the Blue Origin project – which aims to one day make space travel a commercial enterprise – alongside the Wright brothers and the moon landing via archival footage, Shatner reassures us that this is all perfectly noble.

While he first admits believing that the e-tail CEO, and richest man in the world, thought to go to space on a whim, Shatner soon censures himself for his ignorance. “Little did I know that he had this dream all his life.”

Indeed, we learn that Bezos, who bonds with Shatner over their shared love of horses, was a bit of a sci-fi geek. Naturally, he gravitated to “Star Trek” and even made paper replicas of the show’s tricorders, which he dutifully gives the actor “so I can say these have been up into space with my friend Bill Shatner.”

If it’s unsurprising that a geeky kid growing up in the ‘60s enjoyed a popular sci-fi serial and, like nearly every kid before and after Sputnik, dreamed of going to space, a difference is stressed here. This is no mere joyride; Bezos’ ultimate goal is to move manufacturing to space and, per Shatner, “make pollution a thing of the past.”

Nowhere in the documentary is the viability of this endgame challenged, and Bezos can hide behind the modesty of these baby steps, which he likens to the days of barnstorming biplanes before the dawn of major airlines.

But challenging the science, or considering his own company’s issues with plastic pollution, emissions disproportionately impacting communities of color and the unlawful termination of climate activist employees, would blunt the inspirational edge of Shatner’s journey. Instead, it’s important we have scenes of Shatner remarking on the growth of Bezos’ biceps or a scene of the two men on horseback discussing the importance of dreamers and builders who move the world forward. It goes unstated, but is certainly implied, as they near a Blue Origin launchpad, that Bezos is one of these visionaries.

That Shatner serves as a wonderful amplifier of Bezos’ lofty goals should come as no surprise. If Tom Hanks demurred to take the trip, as he claimed he did, Shatner’s penchant for existential platitudes and credulous acceptance of anyone who strokes his ego make him the perfect mark to humanize the head of Amazon. If it all seems a bit agitprop-y, remember Shatner has a show on a TV station funded by the Kremlin. He seems to be none-too suspicious, and honestly, who could blame him – the man’s offering him a ride to space!

Overall the Amazon prime special, which also interviews some of the staff of Blue Origin and Shatner’s fellow travelers, is all inspirational buildup to an underwhelming payoff: a view of the Earth from Blue Shepard’s glans (I mean capsule), which is surely breathtaking in real life, but doesn’t do much for someone watching on their TV.

Shatner lands back on earth amid a cloud of dust, hugs Bezos, and tearfully conveys his fears for our planet. At this point, I wondered about whether the project of chronicling Mr. Shatner’s Sub-Orbital Ride was a carbon neutral affair. The credits didn’t tip me off in this regard, though they do end with the words “For the Benefit of Earth.”

Is it too flip to say for the benefit of Bezos’ ego? Probably, because it is in fact a twofer, flattering not only him, but his new best buddy who “became one of my heroes all over again, but this time as the real man.”

There’s a scene early in the film where we see the reactions of Trekkies at Comic Con to Shatner’s planned expedition. To many it seems like an exciting, full-circle moment. Would any of them, given the unlimited resources of Bezos have done the same thing? Or would they stick more firmly to the humanist message of Gene Roddenberry, resolving international relations and threats on Earth before heading off to the final frontier?

No one can tell Bezos how to blow his cash, but it doesn’t take a visionary to see better ways to spend it.