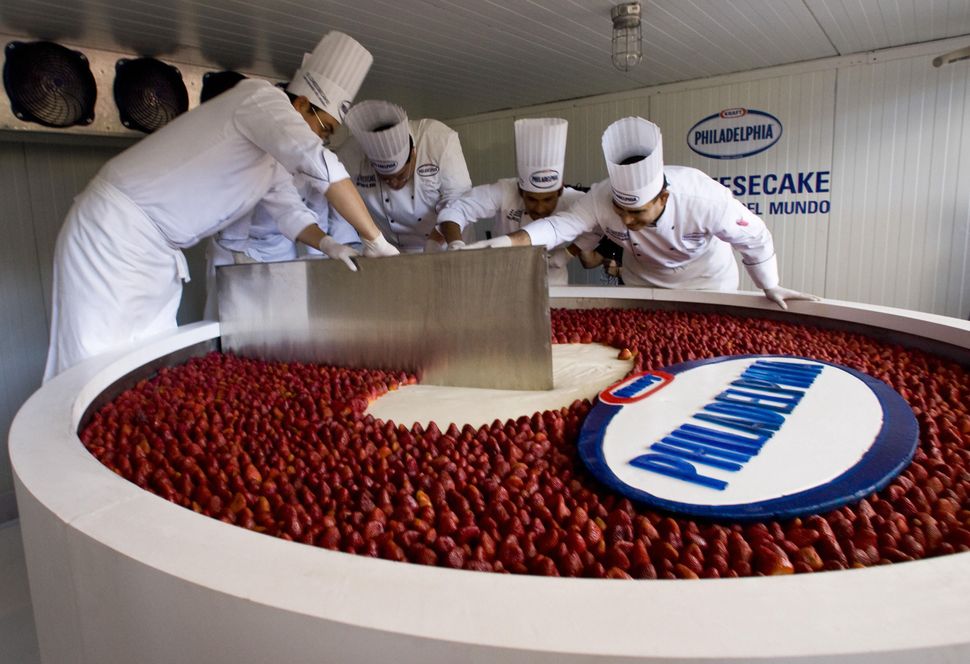 Looking for a Guinness Record: A quintet of chefs in Mexico attempt to slice the world’s biggest cheesecake. By Getty Images

Promptly at noon Friday, I went to a Philadelphia cream cheese website to sign up for the “Spread The Feel” campaign. Amid an ongoing cream cheese shortage, Philadelphia’s parent company Kraft Heinz is paying customers $20 to not make cheesecake for Christmas.

In exchange for an email address and basic personal info, Kraft will reimburse up to 18,000 customers for purchasing alternative desserts the week of Christmas. A good deal for someone like me who does not bake cheesecake or celebrate the holiday.

Overwhelmed by traffic, the website crashed. Turns out, Kraft is not only struggling to meet the demands of its customers, but also the demands of those trying not to buy its products.

“They’re using the shortage to create buzz,” said Jonah Berger, a professor at the Wharton School of Business and author of the book “Contagious: Why Things Catch On.” He sees the viral marketing tactic as a smart way to generate word-of-mouth advertising.

Recently, news coverage has focused on the reasons for the cream cheese shortage. A Forward investigation found it was connected to water issues at a Kraft factory in Upstate New York. While others speculated about labor shortages and the effects of a cyberattack on a Wisconsin plant. Kraft has been able to spin the brand crisis into something positive.

The campaign that asks Americans to skip a holiday tradition has changed the conversation, but it raises a new question: Is cheesecake really a Christmas thing? 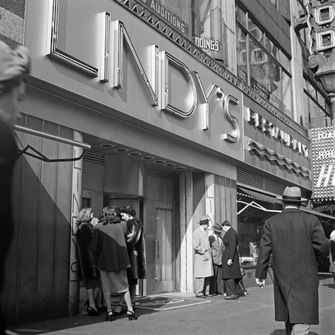 Go to Lindy’s, Go to Luchow’s: In the daytime, pedestrians gather by Lindy’s Restaurant, famous for its cheesecake. By Getty Images

If so, this is a major step in the Americanization of Jewish culture. While there are competing cheesecake recipes from around the globe, the New York cheesecake made with cream cheese is a Jewish dessert, first invented by restaurateur Arnold Reuben in Manhattan in the late 1920s. Like bagels, cheesecake went from being a Jewish food to a New York food, before being absorbed into America as a whole. For it to join eggnog and gingerbread in the fireside feasts of caroling families in matching sweaters is a monumental leap.

This would mean that Jewishness, at least in its richest and creamiest form, has become accepted into the Hallmark movie version of America. If Christmas cherry cheesecake isn’t a thing, Kraft’s promo is a bold marketing strategy to change an American tradition — such attempts are almost a tradition in themselves.

Of course, Kraft is careful in the way Fortune 500 companies tend to be. In their promotional video, they call cheesecake a holiday, not a Christmas, tradition. But the sentimental music, the candy canes, and Santa cookies leave no doubt — they’re not talking about Hanukkah.

One person not shy to say cheesecake is a Yuletide staple is Alan Rosen. Rosen, the third-generation owner of Junior’s, the Brooklyn cheesecake giant, doesn’t miss a chance to associate his Jewish family’s recipe with the Christian holiday. In an interview about the cream cheese shortage, he told Bloomberg, “A bagel without a schmear is one thing, Christmas without cheesecake is another.”

Each December, for nearly two decades, Rosen has gone on the home shopping network, QVC, to hawk Christmas-themed cheesecakes. “Fruitcake can’t compete,” he told me over the phone.

He has the numbers to back him up. “In mail orders, we’ve shipped out 50 to 60,000 cakes in the past 10 days,” he said. For Junior’s, which has four restaurants, sells in 8,000 supermarkets, and ships directly to consumers, half their yearly business is in November and December.

But baked goods and rich food, in general, go up this time of the year. The line goes around the corner at Russ & Daughters too, but that doesn’t mean Santa eats bagels and lox.

To find out if cheesecake is really a Christmas thing, I talked to Gerry Bowler, the author of four books on the history of Christmas. “No,” he responded on a phone call, “if you look at a list of top 100 Christmas recipes from around the world you won’t find cheesecake.”

Unfortunately, no such list exists. So, I consulted the shelves of Bonnie Slotnick Cookbooks in Manhattan’s East Village. The 1976 Time Life tome “Holiday Cookbook” features over 20 Christmas desserts, including the requisite mince pie and Yule log, but none use cream cheese. The 1980 book “A Joy of Cheesecake” discusses Orthodox Easter traditions but not Christmas. 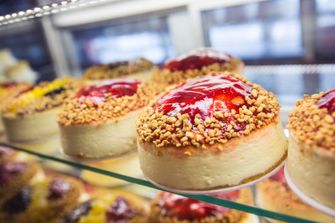 A Jewish Confection Perfect for Christmas? A display of cheesecakes at Junior’s. By Getty Images

Likewise, a Junior’s 2013 cookbook includes menus for Hanukkah, barbecues and even Easter, but not Christmas. Their earlier book of 50 cheesecake recipes does have a Christmas raspberry variation, but then again, they have recipes for almost every holiday.

And that’s the thing: Cream cheese is like a blank spreadable canvas, ready to adapt to any cultural need. If you google “Christmas cheesecake,” pages and pages of colorful options appear. But the same thing happens if you google “Father’s Day cheesecake” or any other holiday and cheesecake. Cream cheese has been malleable and marketable from its start.

Invented in the 1870s by an upstate New York non-Jewish farmer, it was successfully marketed to the Jewish Lower East Side. Even New York cheesecake owes its success to dairy admen, according to Jeffrey Marx, a retired Reform rabbi who is a cream cheese expert.

Marx recounts in a chapter of the book “Tastes of Faith: Jewish Eating in the United States,” how in 1925, the dairy company Breakstone’s promoted Jews to substitute cream cheese for the curd cheese in the old-world cheesecake recipes they brought from Eastern Europe. Almost a century later, these cheesecakes are being promoted as a Christmas treat.

According to Rosen, Junior’s Christmas cheesecakes came about organically. “Going back 30 or even 40 years, strawberry cheesecakes sold like hot cakes around Christmas,” he recalled. The red and white swirl made it perfect for the holiday. Rosen, who would be as happy to sell a cake for a bris as for Christmas, embraced the trend, designing a green, white and red cake that has proved popular.

But it takes more than food coloring to make cheesecake a staple of the Christmas table. “Christmas is based on memories,” explained Bowler, who teaches at the University of Manitoba. “It’s very hard to displace something, once it’s in. It really takes a long time.” Still, many brands have tried to insert their products into the tradition. According to Bowler, in the early 20th century, Ivory soap promoted leaving a bowl of water and a bar of soap so Santa could clean off the soot. Oreo has long run commercials with Santa dipping their branded cookie sandwich into milk, as opposed to the traditional homemade cookies.

While in the 1930s, Coca-Cola successfully promoted a red and white outfitted Santa to match their branding, most attempts to infiltrate the holiday have failed. “Christmas is Teflon,” Bowler said.

If Kraft is able to make cheesecake the new fruitcake, it will probably mark one of the rare times that Jewish culture has influenced the Christian holiday according to Stephen Nissenbaum, a Jewish American historian who wrote “The Battle for Christmas,” a recounting of the birth of the modern tradition. It won’t make cheesecake any less Jewish, but will make Christmas a little bit more Jewish. Nissenbaum finds some joy in this. In an email he said that this would be “a nice inversion of the usual schtick about how American Jews appropriated Christian Christmas rituals for Hanukkah.”