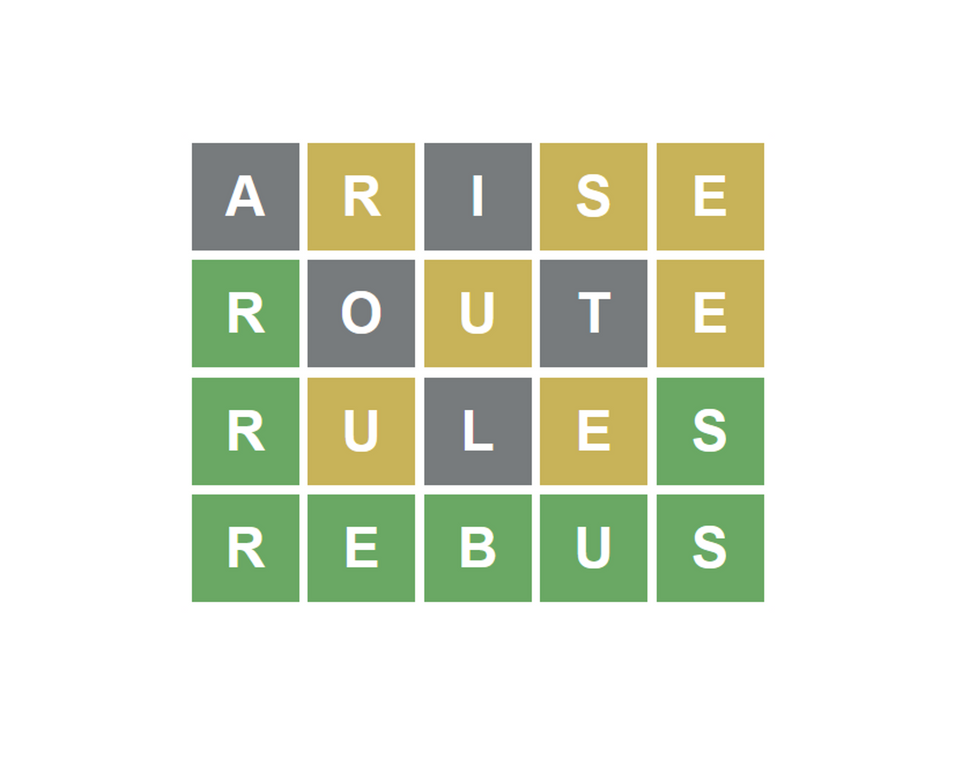 An example of the a game of Wordle, the popular game invented by Josh Wardle. Photo by Wikimedia Commons

Writer’s note: After an outpouring of love for the word game Jotto, this article has been updated.

If you are one of the countless smartphone users currently beguiled by a five by six grid of letters, you may be interested to know about Wordle’s Jewish precursors.

Before Twitter was lit up by rows of gray, green and yellow. Before in-app purchases were even dreamt of, two Jewish inventors inspired earlier waves of puzzle mania.

The first of these men was Morton M. Rosenfeld, who created the logic game Jotto in 1955. Rosenfeld’s invention, where two players used deduction to uncover a five letter word, was played with a pen and paper. You could buy a version, with pre-gridded sheets, but you could also just do it yourself. Or, if you were a certain “West Wing” actor, play it mentally on your way to shul.

Wordle is fun, but not as challenging as “Mental Jotto” which I used to play w my dad on walks to synagogue. One person picks a 5-letter word, the other guesses, and is told how many letters correct, and how many in the right place, but NOT which letters. Far more difficult. Try!

Jotto is remembered fondly by many children of the ‘50s and ‘60s, but in 1970, another game changer entered the market. An enterprising Israeli postmaster and telecommunications engineer named Mordecai Meirowitz gave us a code-breaking smash hit that would come to be known as “Mastermind.” The game was played with plastic pegs, and players vied to figure out a specific sequence of colors.

An earlier version of Mastermind, of mysterious origin, was called “Bulls and Cows,” and was numbers-based. Like Jotto it was played with a pencil and paper. So yes, even if your phone dies and you don’t have Meirowitz’s patented peg box you can still play.

In 1971, Meirowitz presented Mastermind at the Nuremberg Toy Fair, where UK-based Invicta Plastics bought the rights from him. It soon became a smash hit with the 8 and up set, and puzzled many with its packaging, showing a debonair gent tenting his fingers with a young woman in a white dress gripping the back of his chair. The game, later licensed to Hasbro, spawned an electronic and even a braille edition and, of course, a letter-based derivative where players decode a predetermined word.

Mastermind wasn’t just the domain of the playroom. As Clifford A. Pickover wrote in “The Math Book: From Pythagoras to the 57th Dimension,” Mastermind “was significant, partly due to the long stream of research the game triggered.”

As Pickover writes, in 1977 computer scientist Donald Knuth published an algorithm enabling players to crack the code within five guesses, prompting a series of academic papers. But the applications of Meirowitz’s game didn’t end there.

According to a 2020 Vice article marking the game’s 50th anniversary of the game’s invention, the Australian military used the game to train its soldiers. There were international competitions and even basic computer security was influenced by a computerized iteration of the game in the ’70s.

More recently researchers from the University of Leuven in Belgium developed a genetic algorithm for playing Mastermind and, in 2013, a Spanish team presented a conference paper that brought evolutionary algorithms to gameplay.

But while Meirowitz’s game has paved the way for some pretty heady discoveries, the man himself, who would now be in his 90s, seems hard to track down. (An attempt by Vice led nowhere – the article notes even the educational program Meirowitz worked closely with post-Mastermind “didn’t remember anything” about him.)

What we do know is that he was Jewish, and, in 1972, when his game was making waves, he had another Jewish-sounding competitor. That year the People’s Computer Company published a code-breaking game called Bagels. It’s something to remember the next time you start your morning with Wordle and some schmear.