The Secret Jewish History Of Scrabble 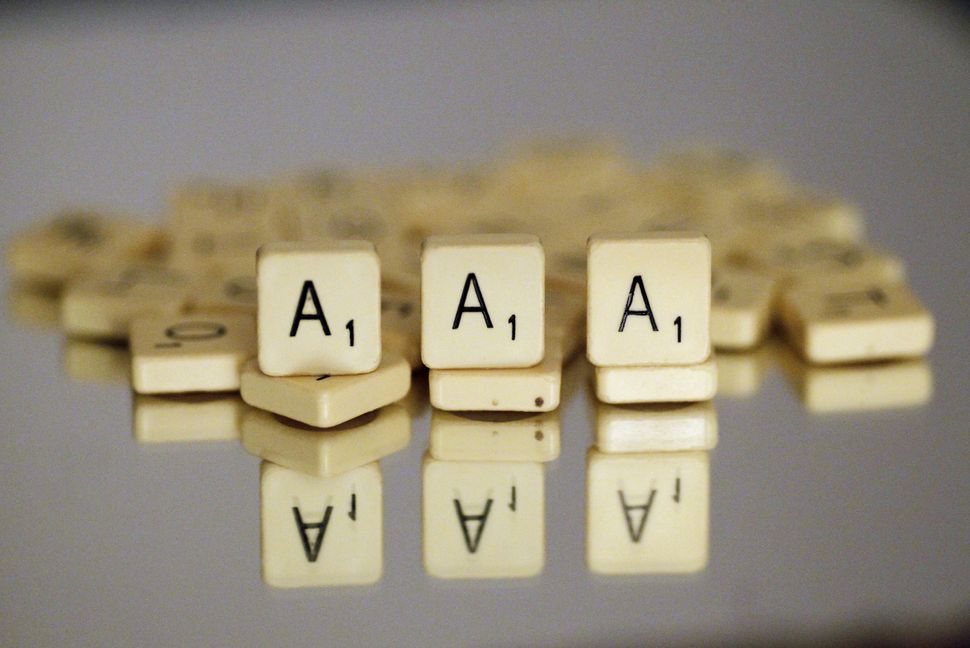 How many Jews finish Shabbat dinner and retire to the living room for an intellectual showdown in the form of a rousing Scrabble tournament? There’s a long history of Jews playing Scrabble, and the relationship between the two, like any relationship, has had its share of ups and downs.

It was the early ’90s when Judith Grad, art gallery owner from Virginia and devoted Scrabble player, objected to her opponent’s usage of the word JEW. She assumed “Jew” was meant as a member of the Jewish people, a proper noun, utterly verboten in the world of Scrabble at the time. Contention brought Grad and her opponent to the dictionary, where many angry and confused Scrabble players had searched for answers before. And there was the definition.

Horrified, Grad wrote to Merriam Webster dictionary and Milton Bradley to demand the removal of offensive words (JEW, KIKE and SPIC were some of them).

“Slurs are part of the language and reputable dictionaries record them as such,” Merriam Webster wrote to Grad. “As a dictionary, it is a reflection of words currently used in our language,” Milton Bradley wrote.

Grad didn’t take no for an answer. She wrote more letters, this time to the NAACP, the Anti-Defamation League and B’nai B’rith. No luck. She called Scrabble “a game of hate,” and circumvented the dictionaries to rally the National Council of Jewish Women to her cause. The council pressured Hasbro, Milton Bradley’s parent company, and Hasbro agreed to remove the words, without the consent of the dictionaries. It was a loss for free speech, but a victory for Jews and a permanent change to the way Scrabble would be played. So JEW is no longer in the Scrabble dictionary (but if it were it would be worth 13 points).

But that wasn’t the last time a Jew has made waves in the world of competitive Scrabble.

“I don’t even know why it’s called Scrabble, to tell you the truth,” said Alfred Mosher Butts, the inventor of Scrabble, who remained mystified by the game’s success up to the day he died. Yet even now, decades later, the World Scrabble championship drags word-obsessed Scrabble fans from all around the world out of their caves and into the cutthroat arena of competitive Scrabble.

David Eldar, the 27-year-old Jewish London-based intellectual, recently became a World Scrabble champion. It was the word “carrel” (a 74- point score!) that snatched Eldar the victory (a carrel is an outdated term for a cubicle desk).

“This means a lot to me. I went into the third game with a huge mental advantage having won both previous games, so I knew I just had to keep focused and if the tiles went in my favor I could clinch it,” the champion said. Eldar conquered his opponent Harshan Lamabadusurilya with a score of 3-0. Eldar’s been playing the board game for 14 years and ranks second in the world. Not bad for a Londoner working in real estate.

Congratulations to David Eldar, the 2017 World Scrabble Champion!! What an amazing tournament #MSAWSC2017 was pic.twitter.com/QGNHuIewT9

The Secret Jewish History Of Scrabble