How forgetting the Holocaust helped Germany thrive after the war 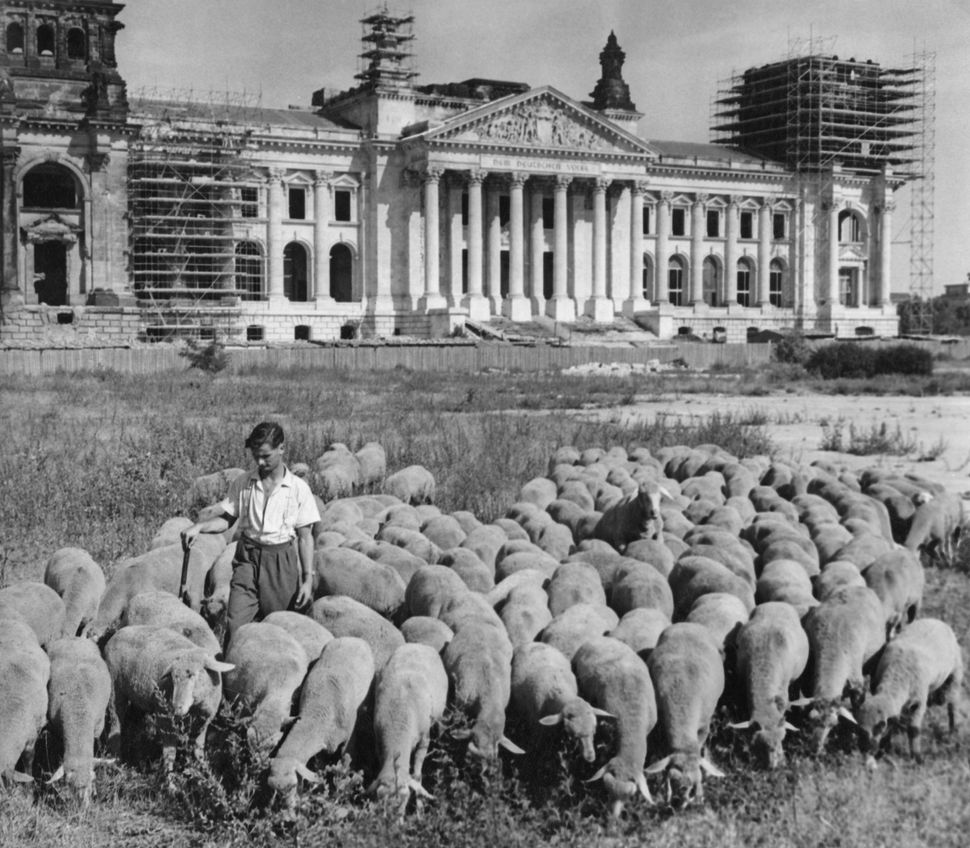 Sheep grazing in front of the Reichstag By Getty Images

By Harald Jähner; translated from the German by Shaun Whiteside

The original German edition of Harald Jähner’s “Aftermath” was titled, more evocatively, “Wolfszeit,” meaning “time of the wolves.” The expression encapsulates the Hobbesian ferocity of the immediate post-World War II period, when the country’s ruined cities were piled high with rubble, its populace was desperate for food and shelter, and the black market and other illegal enterprises flourished.

Our contemporary view of 1940s and ’50s Germany relies on a series of tropes: the Soviet atrocities, the clearing of the rubble, the struggle for survival, Allied attempts at “denazification,” the insistence on victimhood, the repression of historical memory, and, finally, the so-called economic miracle. Even as Germany dealt with its division into east and west, this past lingered, not quite overcome.

Jähner, former editor of The Berlin Times and an honorary professor of cultural journalism at Berlin’s University of the Arts, sets out to complicate our picture of those tumultuous times. Above all, he wants to explain just how a democratic West Germany rose so quickly from the ashes of a genocidal fascist state.

That transformation is more complex than is generally appreciated, Jähner suggests in this often intriguing social and cultural history, winner of Germany’s Leipzig Book Fair Prize in 2019. “While memory usually bathes the past in a softer light with the passing years,” Jähner writes, “the reverse is true for the post-war period in Germany. In hindsight it became increasingly dark.”

Author of ‘Aftermath’: Harald Jähner is a former editor of The Berlin Times and an honorary professor of cultural journalism at Berlin’s University of the Arts, By Barbara Dietl

The extreme material hardships of the period, he argues, were paired with a sense of freedom and possibility – as though the Nazi regime, for all its popular support, was a bad dream, and the Allied invasion a true liberation. That view helped Germans disclaim any complicity in the Holocaust, which “played a shockingly small part in the consciousness of most Germans” in the 1940s and ’50s, Jähner writes.

Postwar Germany was a turbulent land of displaced persons, including former prisoners of war and forced laborers, Jewish concentration camp survivors, and ethnic Germans who had been expelled from land that was no longer German territory. But amid the mad scramble for necessities, there also was a hunger for experience, Jähner writes, including a dance craze, enthusiasm for the performing and visual arts, and “a wave of sexual adventurousness.”

“The dominant image, and to an even greater extent, the after-image of the time is one of anxious and despairing faces,” he writes. “And yet it was also a time of laughing, dancing, flirting and lovemaking.”

The early postwar days were indeed chaotic, with “even the most sophisticated people engaged in looting,” Jähner tells us. But hope was also part of the zeitgeist. The journalist Ruth Andreas-Friedrich, an anti-Nazi resistor, wrote of a people “ripe for redemption,” and the playwright Wolfgang Borchert described a generation “filled with arrival under a new sun, to new hearts.” 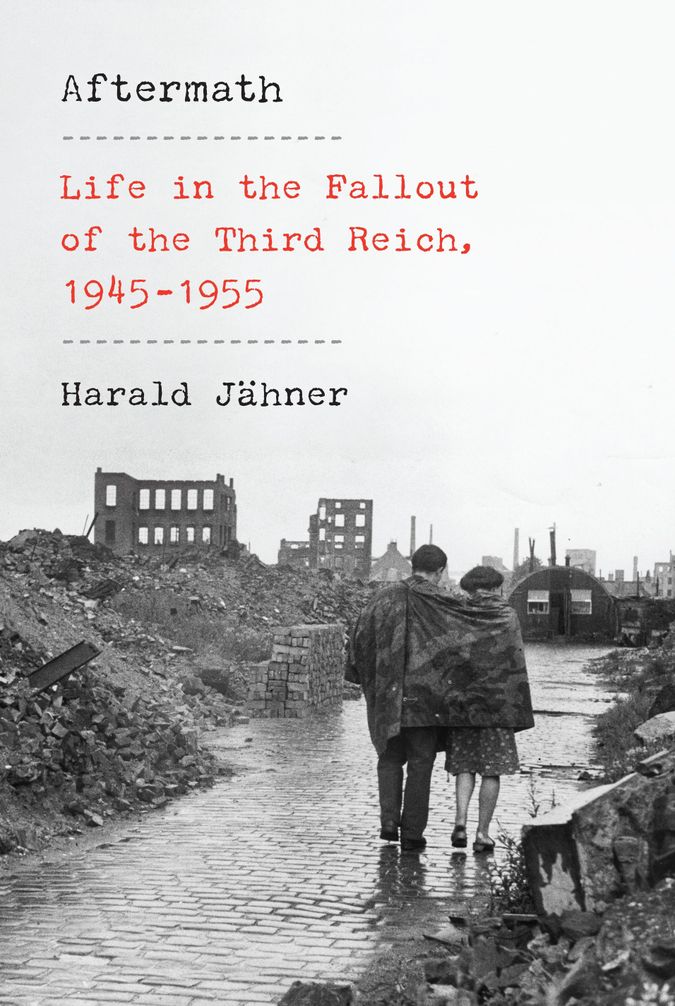 Time of the Wolves: Jåhner’s book was originally called “Wolfszeit,”* suggesting the Hobbesian ferocity of the immediate post-World War II period, when the country’s ruined cities were piled high with rubble. Courtesy of Knopf

The ubiquitous urban ruins were seen as picturesque, the subject of rubble photographs and films, the backdrop to a new literature. Roaming amidst the debris were the displaced persons – an astonishing 40 million who “were not where they belonged or wanted to be.” Even the expellees from the East faced difficulties from their compatriots. “Racism lived on,” Jähner writes, “and was now turned cheerfully inwards.” While some expellees were drawn to right-wing politics, they paradoxically inspired German modernization by helping to level regional differences, he argues.

In the chapter “Love Amidst the Rubble,” Jähner describes the return of the German veteran, “barely recognizable, scruffy, emaciated and hobbling” — “a stranger, an invalid.” In many cases, these men were threatened by their wives’ wartime independence and professional skills. Their “feeling of failure on a personal level usually weighed heavier than their guilt for Nazi crimes,” Jähner asserts (though it’s hard to know how he knows this). German women, disadvantaged by the small pool of available men, sometimes looked to the Western occupiers for romance, out of what Jähner calls “an indissoluble kinship between love and calculation.”

The nadir of hardship, Jähner writes, was the “hunger winter” of 1946-47. Scarcity and rationing helped fuel a black market, as well as outright theft. Jähner writes: “Morality didn’t just dissolve, it adapted; standards were shifted but not completely abandoned.” While the world at large saw Germans as “perpetrators of war crimes and genocide,” they themselves fretted more about quotidian criminality.

In a chapter titled, “The Reeducators,” Jähner tackles the transition from the Nazi mindset to a democratic one. He notes the role of U.S. Army Intelligence recruits trained at Maryland’s Camp Ritchie, many of them German Jewish refugees who returned to Europe to assist the Allied war effort.

Jähner suggests that the Soviets, for all they had suffered, “were much more forgiving” of the Germans, more likely to buy the victim narrative, while the Americans and the British were more likely to see Germans as evil. A chapter on art also touches on the East-West divide, with the CIA helping to fund abstract expressionist tours and loans and Communist East Germany fostering social realism.

But the central question with which Jähner wrestles is how West Germany moved so quickly toward the democratic future. Many Germans, he writes, “dropped their loyalty to the Führer as if flicking a switch – and at the same time wiped clean, at least in their minds, the whole of the past.” It’s too simple to say that they were entirely silent about the Nazi period. But one article he quotes called the Germans victims of “the most shocking physical and mental hardship that any people has been forced by fate to endure.” The murder of the European Jews, and other casualties of Germany’s genocidal war, did not figure into the conversation.

At times, Jähner can be both wry and shocking. “While post-war Germans might have been exhausted, irritable and cured of any kind of nationalism,” he writes, “they agreed on one thing: they forgave each other their Nazi crimes.”

That forgiveness was necessary for democracy to flourish, he argues. “The conviction that one had been Hitler’s victim was the precondition for being able to shed all loyalty to the fallen regime without feeling dishonorable, cowardly or opportunistic,” he writes. That political sleight of hand – really a sleight of memory — was more miraculous, he says, than even the much-vaunted economic miracle.

How forgetting the Holocaust helped Germany thrive after the war