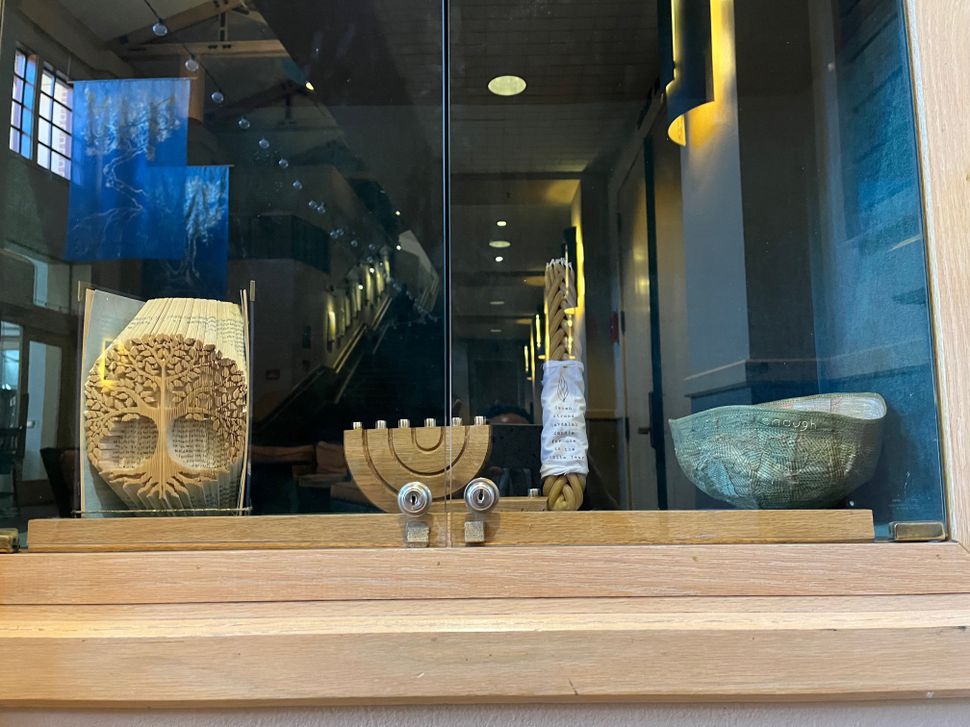 A few of the ritual objects on display. Image by Jessica Rosenberg

What’s the best way to observe the shmita year? Perhaps a seven stranded havdalah candle, or a special set of bowls — we use special dishes for Passover, after all. 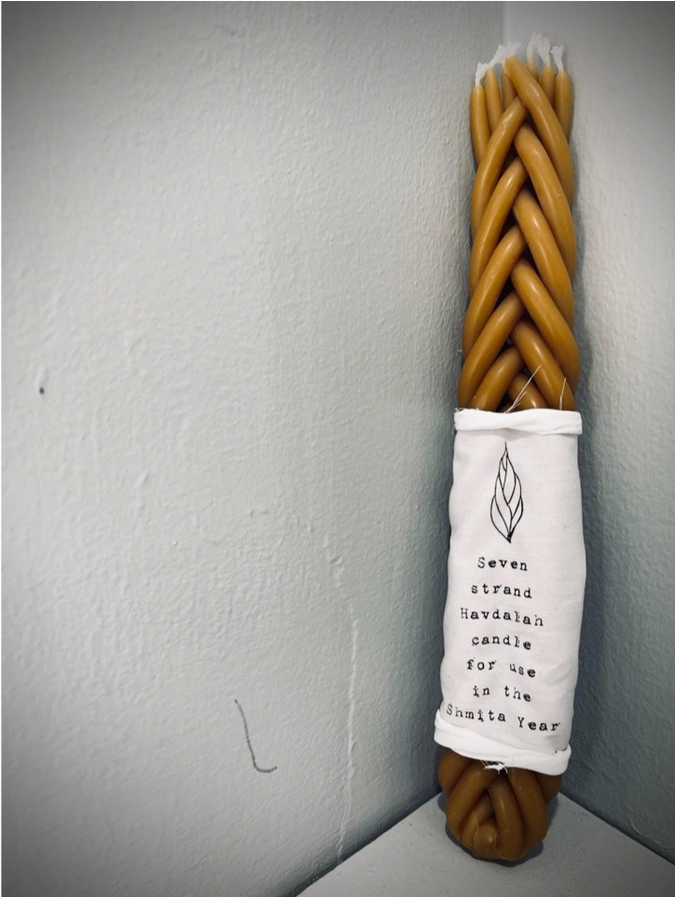 A seven-stranded Havdalah candle for the shmita year. Image by Sarah Zell Young

For those of us who don’t work in agriculture, shmita can be easily overlooked. But “The Shmita Project,” a new exhibit at the Osher Marin JCC in the Bay Area, offers art and ritual objects that can still help ground us in the sabbatical year amidst our urban or suburban lives.

“It’s just something simple you can do to change your habit for the year,” said Jessica Rosenberg, the Director of the Taube Center for Jewish Peoplehood and one of the curators of the exhibit.

The sabbatical year requires us to forgive debts and leave fields fallow, but the requirements are usually interpreted to apply only in Israel, and even there, if you’re not a farmer, it is easy to ignore. Despite the fact that there’s a blessing and ritual for nearly everything else in Judaism, there are no changes to daily life or religious practices during the shmita year.

But the shmita year has the potential to be transformative. Rosenberg partnered with Sarah Zell Young from Hazon, who also has several pieces in the exhibit. Its works were drawn from submissions to the Shmita Prizes, an art competition keyed to the sabbatical year.

“The exhibit was curated to make the concept of shmita both immediately accessible to people and also to draw them in to consider what shmita might mean to them and their lives,” said Rosenberg. “The JCC is a public space and the art will be seen by people of all ages, backgrounds and walks of life,” including many non-Jewish families who frequent the JCC’s fitness center and preschool. 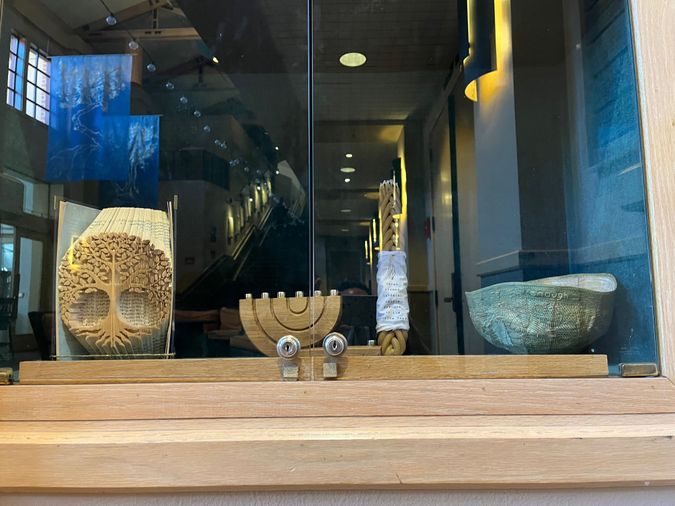 A few of the ritual objects on display. Image by Jessica Rosenberg

The art itself runs the gamut, including a wide range of mediums and approaches to the topic. There are collages and photos with images of trees, solar panels and fields. There’s a stunning cashmere tallit in tones of creams and whites, and a book with its pages cut into a relief of a tree. Many of the artists, in the spirit of shmita, used reclaimed or recycled materials to compose their works.

While some pieces focus on nature and sustainability, including a surprisingly beautiful painting of solar panels, others are quite playful, and add surprising perspective to the idea of the sabbatical year. 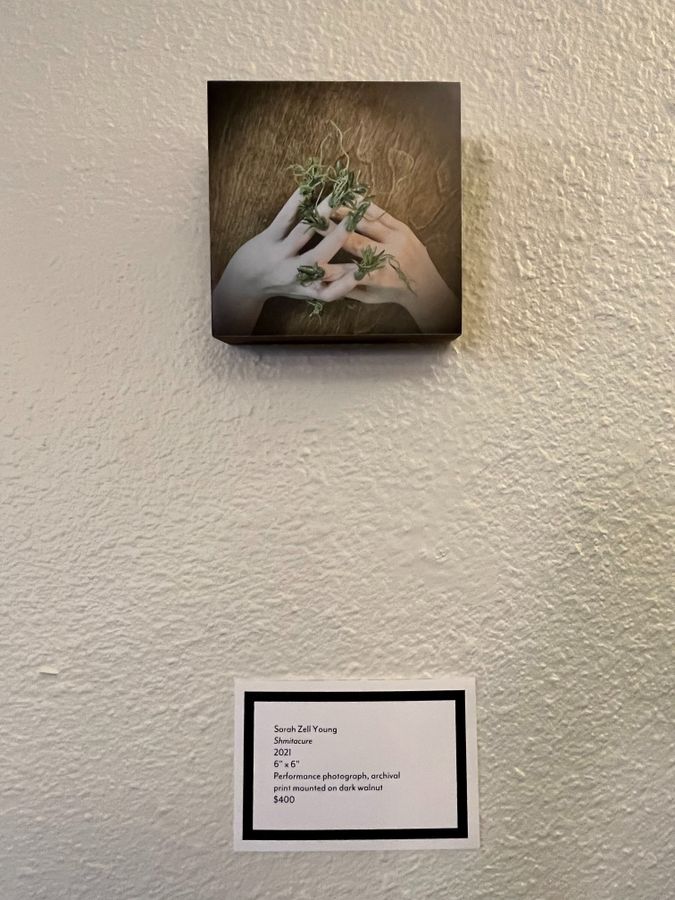 “Shmitacure,” for example, from Sarah Zell Young, takes the idea of leaving fields fallow, with no pruning or trimming, and applies it to fingernails. Society expects people, and women in particular, to hone our presentation, to polish and shine every aspect of ourselves. But what if there was a year of rest from the pruning — of both nails and self — that beauty standards require? Her set of photos, shows nails growing wild, not only in length and keratin but also boasting long tendrils of plant matter.

The transformative possibilities offered by rest is a major theme in the exhibit. “Shmitallis,” from Aaron Kohn, is a tallit woven of soft cashmere to emphasize the comfort and joy of resting on Shabbat, an idea that is taken even farther during the shmita year. “As people connect to the physical softness of the tallis, they can also connect to the spiritual softness and rest that HaShem provides on Shabbat and the shmita year,” Kohn wrote in his artist statement.

And artist Beth Grossman focuses on the rights of the plants themselves. “The Law of Seeds” features seedbags, each painted with a seed in a different stage of germination along with curling calligraphy proclaiming its rights. “If corporations have full legal rights under the United States Constitution, why not seeds?” she asked. The different bags assert the seeds’ right to basic needs such as clean water and freedom from contamination or pollution, as well as their rights to genetic diversity and freedom to grow where they please — a thumb of the nose to corporations such as Monsanto which genetically engineers and patents seed varieties. 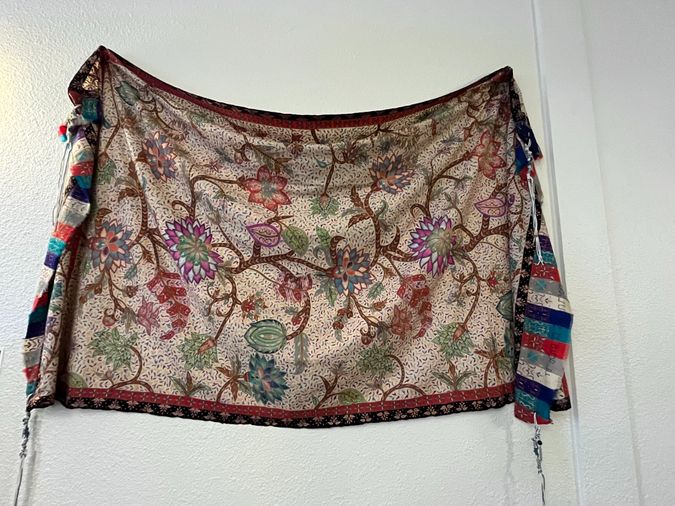 One of the tallits. Image by Jessica Rosenberg

The pieces in the exhibit range from tongue-in-cheek to stunningly beautiful, each thoughtful in a different way, taking on themes such as food justice, rest, sustainability and social structures. A cabinet displays a special category for ritual objects made by artists attempting to think of ways to mark the shmita year the way Jewish ritual marks so many other times, from counting the Omer to observing Passover. Examples include a menorah with the shamash lower, instead of higher, than the other candles.

Rosenberg, who holds a Master’s of Divinity from Harvard Divinity School, has sprinkled pieces of relevant text, in both Hebrew and English, throughout the exhibit to root the artists’ thematic explorations to their biblical basis. Getting to curate exhibits for the JCC as part of her job has been new to her, and she’s found it has broadened her own understanding of Jewish concepts as well as, hopefully, her audience’s.

“Having both ritual objects and fine art is a really good bridge,” Rosenberg said. “It’s been another facet of providing Jewish education and Jewish value and Jewish content, which has been really interesting and fun.”

“The Shmita Project” is on display at the Osher Marin JCC through March 23.