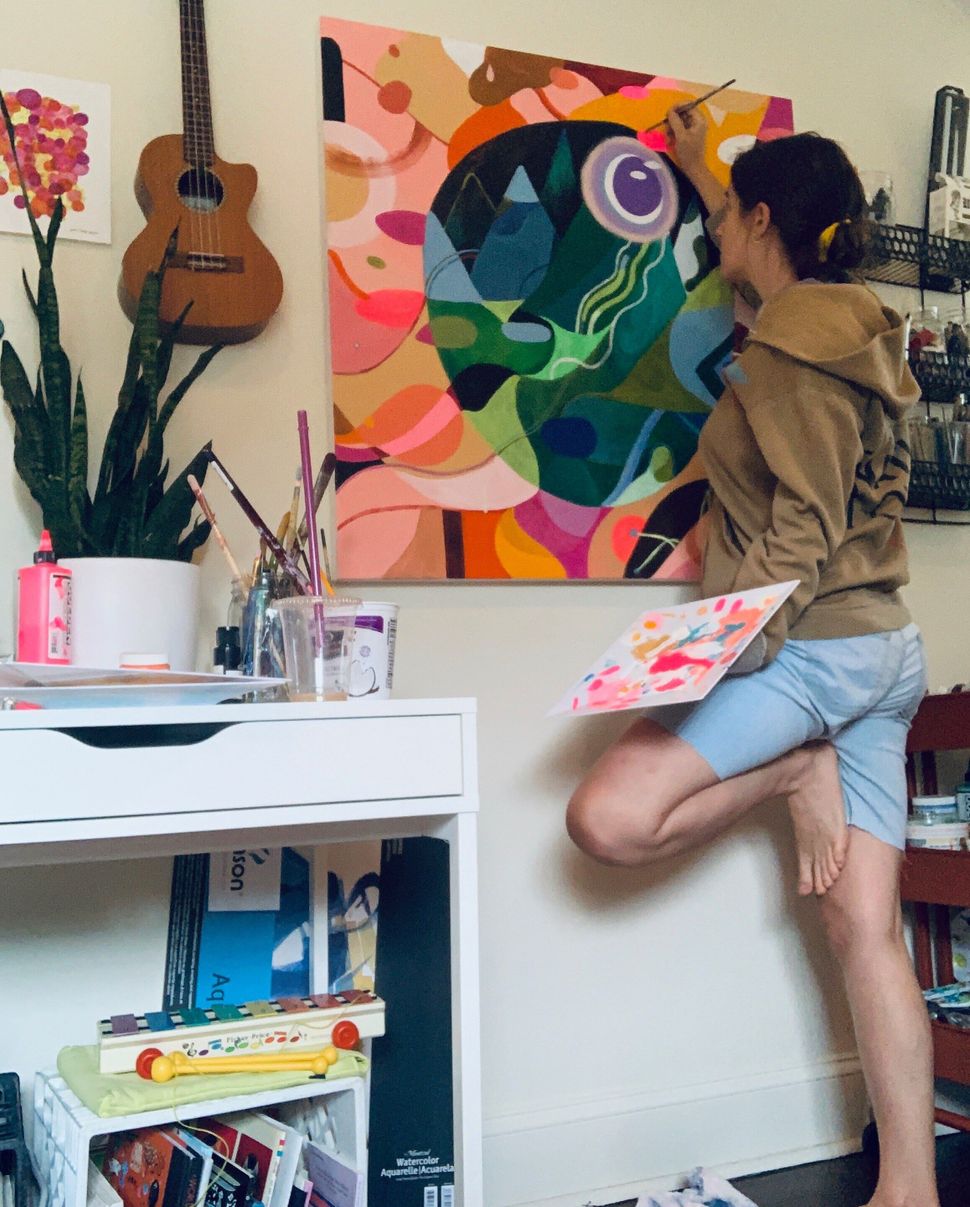 Deutsch paints a canvas for her series inspired by “The Lost Princess.” Note the tree pose. “I did a yoga teacher training years ago, and during the summer I would do, almost four times a week, classes with moms in the neighborhood in the backyards. It’s been important to make even more time for things that aren’t work related just general happiness and well being.” Courtesy of Jessica Tamar Deutsch

During the pandemic, Jessica Tamar Deutsch has been considering exile as she relearns how to paint.

Specifically, she’s been thinking about the title character in “The Lost Princess,” a story by Rabbi Nachman, the mystic founder of the Breslov Hasidic movement, about a young woman who disappears from her home after displeasing her kingly father.

“In short, this princess is exiled from her home for like a million years,” Deutsch, her palms tucked in the sleeves of her sweater, fingers fiddling with what looked to be a roll of painter’s tape, said in a Zoom call. “I was thinking, ‘She’s in isolation: What did she potentially gain from that journey?’”

Daubing bright pastels onto canvas in between her own outings in nature, Deutsch is continuing her series of scenes from the king’s viceroy’s long trek in the wilderness to find the ousted princess. The project’s themes hit closer to home now that Deutsch is home in Westchester County to be with her family; she had an easier homecoming than the princess. Her parents live in New Rochelle, the first Jewish community to detect a COVID cluster in New York state. (Two family members were infected, but they’ve since recovered.) 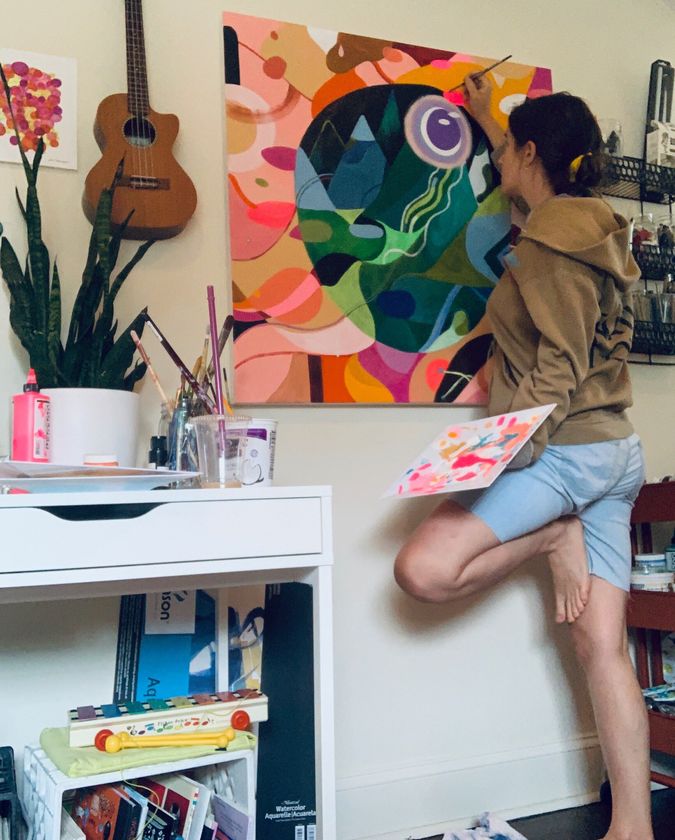 Deutsch paints a canvas for her series inspired by “The Lost Princess.” Note the tree pose. “I did a yoga teacher training years ago, and during the summer I would do, almost four times a week, classes with moms in the neighborhood in the backyards. It’s been important to make even more time for things that aren’t work related just general happiness and well being.” Courtesy of Jessica Tamar Deutsch

Deutsch, a 30-year-old, usually Brooklyn-based, illustrator whose eclectic work includes handmade ketubot, Jewish tarot cards, an illustrated Pirkei Avot and prolific Instagram posts and prints — has settled in nicely back in the suburbs, away from the eclectic Jewish community she misses in Prospect Heights, Brooklyn. She’s finding new ways to engage in her practice and focusing more on the kind of art she wants to pursue. Her major theme is how Jewish ritual has changed, and, many all of us, she’s now confronting how secular ritual has been upended by the pandemic.

At times sharing a house with her three siblings and two parents — during family dinners they pretend they’re at Sweetgreen — she’s had a calm and close-knit COVID existence apart from her old apartment and shared studio space in Dumbo. She’s also learned a few new tricks, getting comfortable driving, making and shipping her own prints and testing the waters of the gallery world — for when galleries eventually reopen.

While that day seems far away, she’s finding some comfort in her rendering of Nachman’s fable. “Fairy tales are also helpful in this time,” Deutsch said. “Imagination is a really important tool for hope.”

I spoke with Deutsch about transitioning to home life, how the pandemic has changed her process and the upcoming holiday of Tu’Bshvat. The conversation has been edited for length and clarity.

On her homecoming: A day or two after Purim, my mom freaked out. She said ‘You have to come home — especially you.’ Thank God, I’m a pretty healthy person, but I’m always the one who while travelling will get sick. We all thought it was going to be a month or two. Once it was August, I fully accepted that this is where I am right now.

Where she works: I took over a guest room and I do very well in, like, small cozy spaces so I’m thrilled. We call it my art cave or like my art grotto. The ceiling is slanted a little bit also on one side, so it really has this cave feeling to it which I really love. It feels like my Brooklyn home — but, above the garage.

Her routine — or lack thereof: I’ve never really been such a routine person; it’s more just like there’s like a handful of things that need to get done. And if I could get done like two or three of them, that’s good. Over the summer I made a big garden in my parents’ backyard and that took a chunk of time so I’m trying to also not be, as I very much can be, a workaholic. It just doesn’t seem like that because I’m making pictures. I definitely have been a lot more efficient which has been the funniest surprise.

Perks to being out of the city: This was an opportunity for me to focus on what do I actually want to do, instead of what are the opportunities. Client work stuff was not bringing me that much joy. I was able to listen to what are the practices that I would enjoy doing to begin with. I started doing a lot of really simple linework drawing, a lot of stuff inspired by simple prayers that a lot of people are familiar with and find comfort in. That was a big thing for me: Reconnecting to prayers that you say as children — I got really into bedtime Shema stuff. 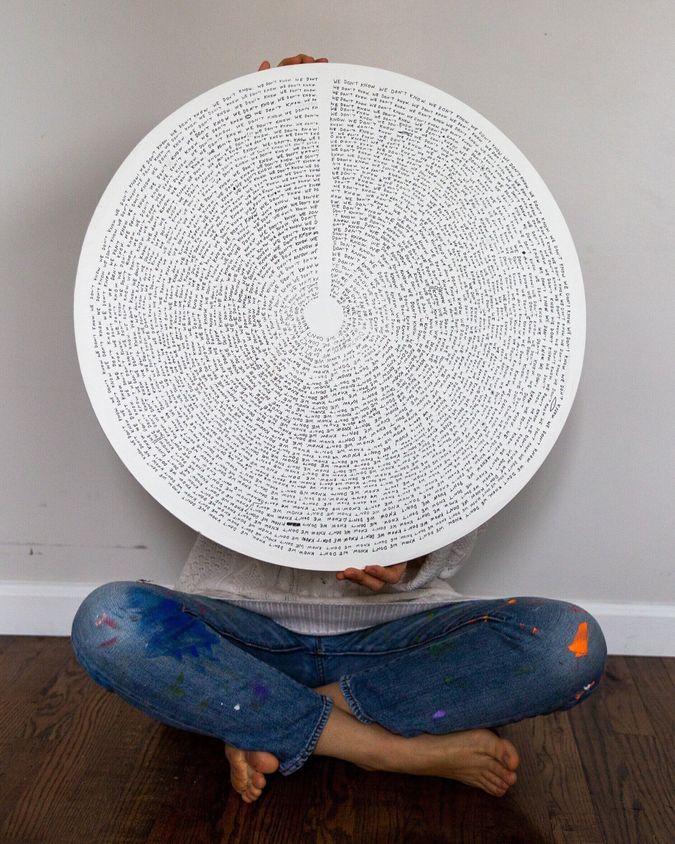 One of Deutsch’s “Circles of Faith.” “These circle panels explore different themes that relate to faith, and spiritual endurance in challenging times.” Courtesy of Jessica Tamar Deutsch

Skills she’s picked up: I finally figured out how to make nice prints on my own instead of outsourcing it to print shops. That was a cool thing that I don’t think I would have maybe ever really bothered to figure out on my own if I didn’t have lack of distractions and friends around here.

And a skill she’s relearning: Painting is a little bit of a new thing for me that I haven’t really done seriously since I was a teenager. Most people who are learning new crafts and like how to bake sourdough, I’m like, ‘I’m learning how to paint again,’ which feels good to do.

Tarot Cards for Tu B’Shvat: Three years ago I was doing art with Lab/Shul and basically whenever I felt inspired to do something for a holiday they were like “Let us know, we’ll make it happen.” I got really excited by tarot cards. There’s so many components and there’s so much symbolism in the Tu B’shvat holiday and if you do a Seder ritual for it, you travel through the four worlds and all seven species that are celebrated but there’s also other nature components that you relate to the holiday. I basically gathered all those things and made illustrations of them. I market it now as a “Jewish mystic card set.”

The 20 tarot cards that debuted at Lab/Shul’s Tu B’Shvat Seder, featuring the seven species and other features of the holiday’s mystic tradition. Deutsch says many people who order the deck use the cards as daily sources of inspiration. Courtesy of Jessica Tamar Deutsch

What her celebration looks like this year: I plan to meet up with at least one friend and do something for Tu B’Shvat; a lot of people are now in more remote areas of nature. I think Tu B’Shvat is a good holiday to connect in a very simple way that could also feel very transformative and meaningful.

What she misses about Prospect Heights: What I loved about being there was that I could go to a very Orthodox Chabad Friday night and then a Shabbat morning drumming circle kind of atmosphere. There’s such a wealth of sincere, beautiful practice that looks very different depending on which way you walk.

Her plans for “real life”: For the most part I make a piece and its whole purpose is to be shared online and maybe be made into a print. But for the things I’m working on now, I would love for them to be seen in a gallery space in real life. I’m trying to be patient with that and just making more paintings.