The best (and worst) Jewish ads of the 2022 Super Bowl 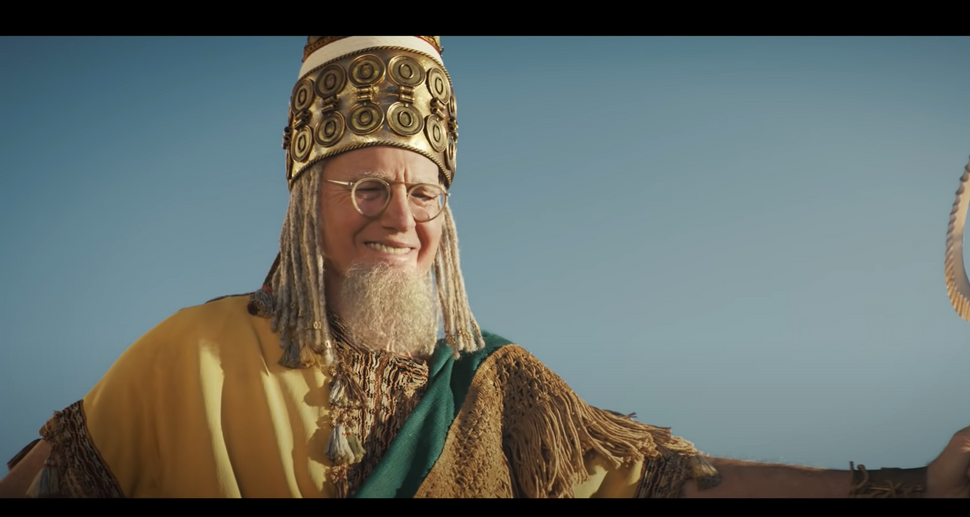 Larry David in an ad for Cryptocurrency Image by Screenshot/Youtube

While football diehards gnawed their nails as the Rams managed a last-minute victory over the Bengals, those once-a-year watchers had a quite different, but equally suspenseful, experience of Super Bowl LVI. Tuning in for the commercials, casual sports fans wondered which of the night’s two top products was being advertised in each spot: Electric vehicles or cryptocurrency.

With a halftime show bereft of memeable moments (except for a ceiling-suspended 50 Cent), commercials were the prime internet diversion for the segment of the population that was meeting two identical-looking quarterbacks for the first time.

Of course, the Forward culture desk was Jewspotting – and there were many Jews to be seen shilling all sorts of brands from Planet Fitness to a new eco-friendly Silverado. Here’s a roundup of the best and the worst of the pack.

One of the magical qualities of “The Sopranos” is its ability to turn an execrable song from an obscure British band into the most exciting soundtrack on TV. “Woke Up This Morning” plays in this spot for an all-electric Chevy Silverado – which recreates the opening credits of the seminal HBO classic – functioning as a Proustian madeleine (or gabagool) for prestige TV devotees. Some of the sights have changed along the Jersey Turnpike, and so has the driver: Jewish actor Jamie-Lynn Sigler, who played Meadow Soprano, is at the wheel this time. Her destination is the arms of her onscreen brother, Robert Iler, who she embraces near a lobster shack. Is this all tenuously Jewish, with many treyf landmarks? Absolutely. But then, as the narrator says, this Silverado is “a whole new truck for a whole new generation.” L’dor v’dor, baby.

4. Seth Rogen and Paul Rudd share a nosh (and memories)

Sometimes snacks bring back memories (see the above mention of Proustian gabagool). I still remember these Archer Farm chips I ate at my friend’s double my senior year of college. We’ve yet to find them again. Anyway, in this commercial, Seth Rogen and Paul Rudd reminisce about all the good and scary times they had eating Lays, from road trips to turf wars, kidnappings to house buying. It seems that Rogen bought a haunted property, and soon met the spirit that possessed it. It all ends in a wedding that appears to be at least a little Jewish, with some kind of chuppah and Rogen being held aloft on a chair to an EDM remix of “You’re Still the One.”

Eugene Levy’s career has moved in stages. He was a goofy, game cast member of SCTV and later Christopher Guest comedies. He then somehow became the anchor character of the “American Pie” franchise and its many direct-to-video iterations. Lately he has turned dapper silver fox in his family affair sitcom “Schitt’s Creek.” This ad completes his transformation: After Brie Larson lends him the keys to a sports car, Levy drives by Marvel mainstays Danai Gurira and Dave Bautista, sprouting luxurious gray mane and knuckle tats as he floors it through an urban landscape. This commercial is not great, but if the new, seemingly none-too-Jewy “Moon Knight” trailer is any indication, it may be the closest we come to a Jewish hero in the MCU for quite some time. It also surely counts for something to have a Jewish answer to Mel Gibson’s Mad Max.

While it may be an indication of a healthy union that two celebrities would volunteer for an ad in which they neg each other via Amazon Alexa, I prefer to believe that this is real and Scarlett Johansson and Colin Jost are on the rocks. For personal reasons.

One could wax poetic forever about this spot, in which celebrities play morons who believe everything delivered via Uber Eats must be edible. But in a way, it’s better to just say that Gwyneth Paltrow has completed her mission of self-parody – and perhaps her entire purpose in life – by consuming the viral Goop candle scented like her own vulva.

5. Doja Cat digs herself out of a McHole

I can’t be the only one who finds it profoundly sad that Doja Cat’s internet-native knack for self-invention is now being leveraged by the tastemakers at Taco Bell to dish out some lashon hara on competitor McDonalds’ inability to maintain a working ice cream machine. (Mickey Ds is just hinted at, but given all the clown makeup, its pretty clear who the marketing department had in mind.) Doja sings “Celebrity Skin” by Hole, but the iconic song’s use in a commercial for a fast food chain is decidedly uncool. The worst part is that the whole thing worked. I wanted Taco Bell.

There’s a truism in musical theater: When emotions are too much, characters stop speaking and sing. Here, Zach Braff, to the tune of “I Feel Pretty,” croons “I’m so angry I’m singing a song.” But the cause of his anger – the price of his internet bill – feels like an abuse of the late Stephen Sondheim’s original lyrics. To be fair, Sondheim never liked his work on this particular number, but his and Leonard Bernstein’s music deserves better than singing the praises of T-Mobile’s home internet service.

3. William Shatner works his biceps while judging other celebs

Lindsay Lohan is a good sport in this ad, which pokes fun at her messy past. Same for Danny Trejo, who dons an ankle monitor bedazzled by Lohan in reference to his criminal history. Dennis Rodman also makes an appearance, failing to answer a “Celebrity Jeopardy” question about his supposed marriage to himself. It’s nice to see celebs evincing a sense of humor about their pasts. But the gimmick loses its shine when the narrator reveals himself as the one and only William Shatner, smugly relating how Lohan is “trading DUIs for DIY” as if he’s above all this self-mockery. Couldn’t we have at least had a line about his awful spoken word albums?

I guessed the “Keeping up with the Joneses” punchline about two seconds in. The Jonas twist was lame.

As Larry David appeared in a montage of period scenes dismissing the world-shaping innovations of the ages, I was charmed — at first. Reading about the tricky, Omicron-timed production schedule, I have an appreciation for regular “Curb” director Jeff Schaffer’s work wrangling the spot, for which David worked 16 hour days. I also like that the extended cut of the ad implies that the bagel antedates the creation of the wheel. I cannot, however, understate the reaction in the room when it was revealed that this was a commercial for a cryptocurrency company. We screamed. Et tu, Larry?! You risked your health to shill for this? Matt Damon, we could deal with. But you? It’s almost as bad as learning who Cheryl Hines is married to.

The best (and worst) Jewish ads of the 2022 Super Bowl