Leonard Cohen changed Israel during the Yom Kippur War. Did it change him? 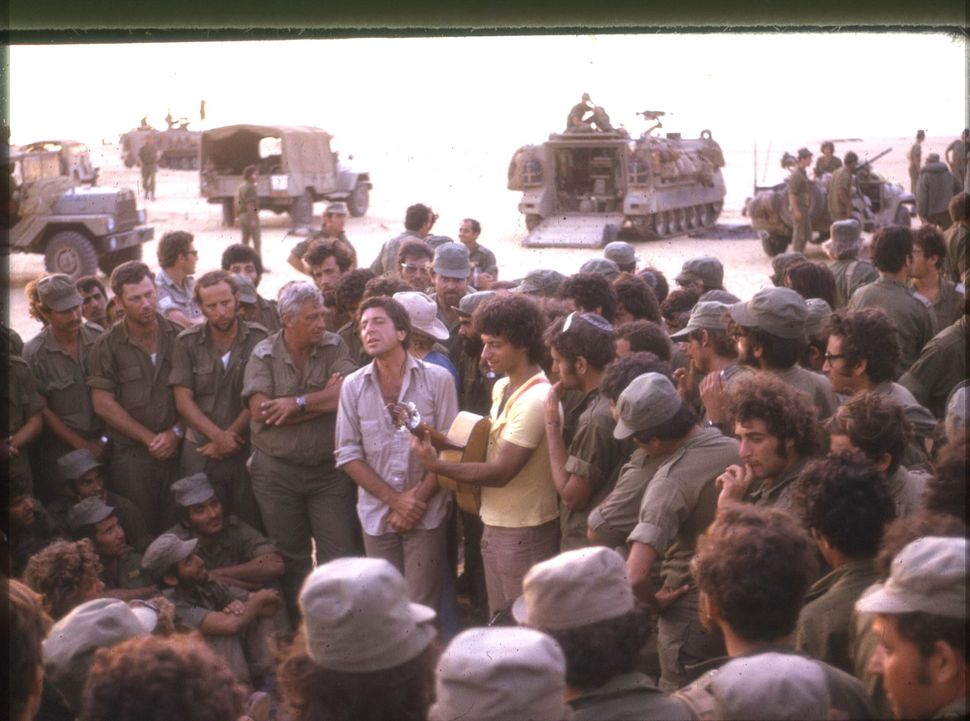 In October of 1973, Israel was fighting the Yom Kippur War with Egypt and Syria and Leonard Cohen decided to visit. His exact reasons have long been a mystery. Hearing him clarify them, you may wish they’d stayed that way.

In an unpublished manuscript, the 39-year-old poet wrote he “wanted to go fight and die because she was so ugly to live with.” The “she” was Suzanne Elrod – not she of the song “Suzanne,” (that was Suzanne Verdal, a friend). This Suzanne was the woman he called his wife, though they never married. He also referred to Elrod, who was the mother of their then one-year-old son, as “a creature of unbeauty” and told her, “Because it is so horrible between us I will go and stop Egypt’s bullet.”

These lines, printed for the first time in Matti Friedman’s incandescent history, “Who By Fire: Leonard Cohen in the Sinai,” yield both a pat explanation and an immensely unlikable protagonist. If we are to simply rely on Cohen’s own remarks about his journey to the Sinai Peninsula – both his rare public and private comments, and even this windfall of a manuscript, reproduced at length – we would walk away disappointed and disillusioned.

The motivating love for the Jewish State often ascribed to Cohen shrinks to a death wish or a misogynistic escape route, colored by the artist’s lascivious asides about young Israeli women. But Friedman, in a short yet sweeping volume, makes a stronger case: Cohen, who months earlier teased his own retirement, found in the war – where he’d perform on airfields or warships, illuminated by truck lights, his amplifier hitched to tank batteries – the spark he needed to continue singing and reclaim his voice.

The evidence here is somewhat specious. Cohen did write a song during the war, “Lover Lover Lover,” which, in some performances for the troops, included a verse that explicitly addressed his being there to “help my brothers fight.” But, there’s also little indication that he came with the purpose of boosting morale. Stating his intent to work on a kibbutz, it’s only when he runs into performers at a café that he joins them on their circuit. (These other performers aren’t mentioned in Cohen’s chronicle of events – nor are many soldiers he encountered; indeed, his dispatches from the front disappear into lists after a time.)

The story of how Cohen, a few months after experiencing Israel’s costly victory, began writing songs again, including the one for which this book is named, and which is inspired by Yom Kippur liturgy, is ultimately less compelling than the experience of the soldiers whose paths he crossed.

In the best parts of “Who By Fire,” Cohen appears as a mirage. He napped in a switchboard operator’s bed before a performance, (she wasn’t in it, but was thrilled he slept there). He manifested, said one soldier who saw him shortly after a bloody push over the Suez Canal, like the voice of God to Moses, sitting on a steel helmet and playing guitar. His performance was one of two momentous events aboard a landing craft (the other was an impromptu wedding whose consummation was thwarted by a sleeping sailor in the groom’s quarters). 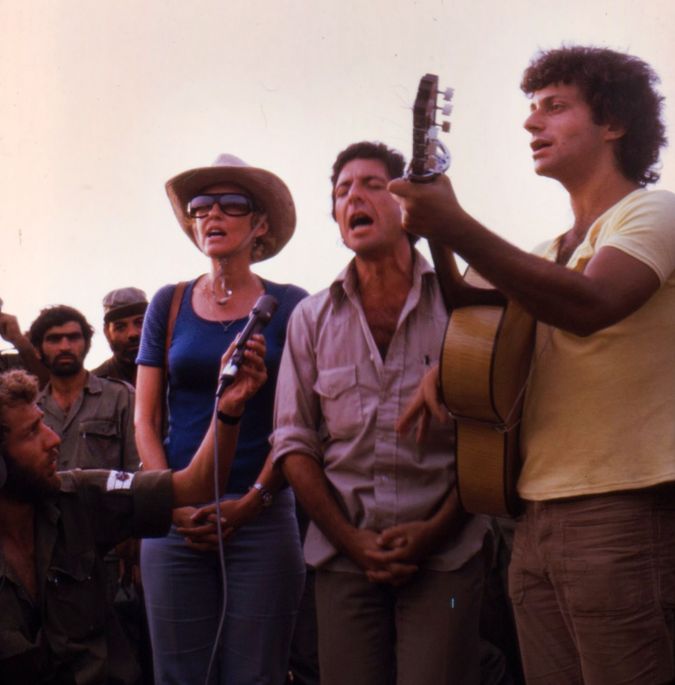 Cohen sings with Matti Caspi and Ilana Rovina near an airbase at Fa’id. The story of the photographer, Isaac Shokal, and the exploits of his unit the Almond Reconnaissance, are a gripping part of Friedman’s book. Photo by Isaac Shokal

Friedman interviewed the people who saw, or nearly missed, Cohen’s cameo, like an inexplicable pillar of fire in the desert. He knows that their stories, of a traumatic war that forever shifted the Israeli psyche, deserve to be rendered in their fullness. All roads lead back to Cohen, but the switchbacks and detours are necessary to process just what this troubadour wandered into.

If the book may overstate its case, offering Picasso’s “Guernica” and Beethoven’s Fifth as works that, like some songs by Cohen, were shaped immutably by history, it understands what made Cohen an ideal prophet for this conflict.

Drashing on the Day of Atonement mandated at Sinai, Friedman writes how that mountain is roughly 50 miles from where soldiers went skinny-dipping, oblivious to an impending attack. The nature of the war in Cohen’s “myth home” reflects his regular subject: the colliding duality of the sacred and the sensual. Baked into the nearly three-week war is the ritual of Judaism’s most hallowed day, in which we consider death, and the reality of a Jewish State that lives under constant threat.

During the Yom Kippur War, a country came of age and, belatedly, out of the ‘60s. As Friedman observes, Israel was primed for a turn toward Cohen’s concern with the individual soul and a suspicion of the communal spirit promoted by its founding generation. Rocked by a major tragedy, Israel met Cohen where he was – but the extent to which it rubbed off on Cohen can only be guessed at.

There are some indications. Cohen’s post-1973 work returned regularly to Jewish themes and texts, including, a year after the war, the Yom Kippur prayer “Unetanneh Tokef.” His martial obsessions – with him from childhood, courtesy of his father’s service in World War I – remained with him. He would play Israel near the end of his life and, as a stately patriarch of priestly pedigree, bless the crowd. Of the three of these, only his stepping into the role of a venerated elder feels like a fresh development, and Friedman frames it as perhaps the most significant.

Cohen’s manuscript ends where it began: with Suzanne. “As surely as the war is a dream and wounded men can’t remember why, she has become beautiful.” It’s too tidy an ending, and one imagines its conceit (man hates his wife, sees war, returns and finds her beautiful) is largely artificial. Certainly it’s boring. But it may capture a real insight – if not about art, than an artist whose personal maturation was overdue.

From the hubris of its adults and the death of its children, Israel grew up in October 1973. In going to bear witness, so did Leonard Cohen.

Leonard Cohen changed Israel during the Yom Kippur War. Did it change him?